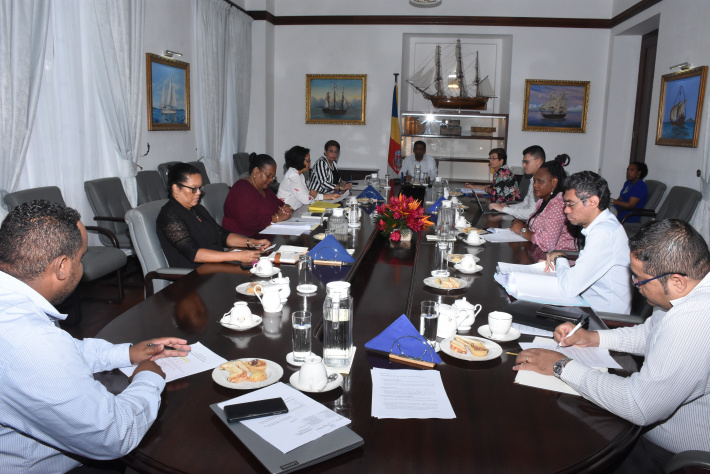 Speaking to the press after the meeting Mr Simeon noted that they talked about improving services that they offer to people in need especially on Praslin and La Digue.

“We have taken a decision to increase from two to three per week the number of days that staff will be available to offer services from the Agency Social Protection,” Mr Simeon said.

The staff will be given additional support as well to help them with their tasks as the number of people requiring their services has increased.

Mr Simeon noted that there are gaps in the system as many are going under the radar if they are not registered, so they have linked department of employment, family and education to make sure that they don’t go unnoticed.

“This support will come through the Ministry of Family Affairs, department of health and local government where they will accompany these families through the situations they are facing,” said Mr Laurence.

He added that this will be conducted on a one to one basis and will be offered through a psycho-social programme where families will be given a mentor that has been trained to guide and help them address their different issues such as finance.

“We have seen many times that the same families are coming back to re-apply for financial help and most often it’s because they are not using their money wisely,” said Mr Laurence.

“People wishing to receive this kind of service will have to contact their district administration and their case will be referred and analysed and from that it will determine what type of assistance they will get,” said Mr Laurence.

He added that their goal is to empower the family and give them the capacity to deal with the situation that the country is currently in.

“The service is already on offer and we are currently working with thirty families and we encourage more who need this additional service to come forward,” added Mr Laurence.