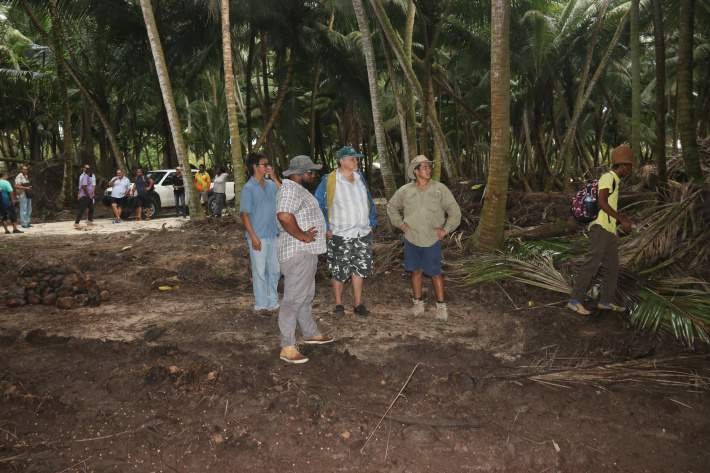 The farming community represented by different associations, including some individuals, have welcomed the initiative by the Islands Development Company (IDC) to venture in partnership with them in large scale farming on the outer islands, especially on Coëtivy, where they got to see the potential for such activity during a visit on Tuesday this week.

Besides viewing land with potential for farming, the farmers also got the chance to see some of the infrastructure to be renovated to cater for such facilities as living quarters, clinic, warehouses, shops, among others, that were used by the Seychelles Market Board (SMB), now Seychelles Trading Company (STC), during the prawn farming days and those that were occupied by the prisoners who have already vacated the island.

It is expected that 300 to 400 workers will be on the island when the agriculture project starts.

The chairman of Apas and also the earth consultant on Coëtivy for IDC, Barry Nourrice, said that the association he represented along with other associations and individuals are very happy with the initiative put before the farmers by IDC but for it to be successful requires collective effort through supporting one another.

He claimed that from his scientific research, the soil on Coëtivy is very fertile with sufficient required level of phosphorous to start agricultural production at any time.

He further claimed that most of the soil on Coëtivy contains 5% of organic matter with some areas reaching 19% in organic matter as per the required 5.8% deemed suitable for agriculture. He added any area considered as poor for cultivation on the island is potentially harvestable.

Mr Lionnet said that IDC has turned to scientific data as the base to start agriculture on Coëtivy, to eliminate the guess work which most of the time resulted in poor harvest.

“Before a plant is put in the soil, we have to know the nutrient content of the soil, what is available in the soil for the plant to grow along with laboratory tests and analysis and by doing so we will know what the plants need and therefore we won’t have to feed the plant with more or with less as we would know the exact amount of nutrients needed for a plant to feed on to grow for the best yield,” Mr Lionnet said.

Mr Lionnet explained that the visit by the farmers on the island follows meetings with them by IDC during the last few months to discuss the idea and the way forward after the board of directors early this year took the decision to turn Coëtivy into an agricultural island.

He said that a steering committee will be set up for further discussions such as on the lease agreement, the bio-diversity in terms of control of pest and invasive plants, logistic, use of chemicals that will affect the underground water borehole among other matters of concern.

He said that if all goes according to plan, by the end of 2020, a working agreement is expected to be reached to set the way forward for the start of cultivation by 2021 with the first harvest expected by mid or third quarter of 2021.

Roger Morel, the chairman of the La Digue Farmers’ Association, recognises the agricultural potential of the island and said that he will encourage farmers on La Digue, especially the youths, to invest in farming on Coëtivy.

Apas representative, Jean-Paul Geffroy, who also owns the Geffroy’s Farm at Anse Royale, also highlighted the potential of Coëtivy for large scale agriculture but noted that due to the remoteness of the island, it would be difficult for a famer to venture on his own other than do it collectively.

Apart from partnering with the farmers in agriculture, IDC is also venturing in aquaculture for the production of shrimps, sea cucumber and sea urchins among others. It will also re-develop a vanilla plantation in the north of the island.

Among active economic activities, the island is recycling old coconuts on the island where 600 litres of coconut oil, one tonne of copra and 400kg of animal feed (pounak) are being produced on a daily basis. All of these products are sold on the local market. It is expected in the near future to venture into virgin coconut oil production for the export market.

The island is also producing charcoal from casuarina trees, downed during the clearing for agricultural land. The charcoal is expected to hit the local market soon.

The island is also rearing a few cows, goats and pigs.

Coëtivy is a small coral island situated 290km (180 miles) south of Mahé. The island has an area of 9.33km2 (3.60 sq mi) and is low lying and heavily wooded mainly with coconut and casuarina trees accompanied with heavy undergrowth.

The accompanying photographs taken by Patrick Joubert show some highlights of the visit as well as some economic activities being carried out on Coëtivy. 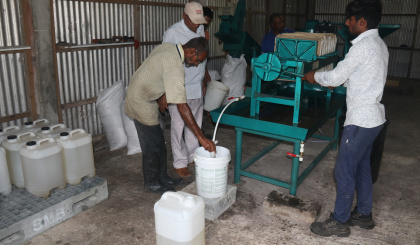 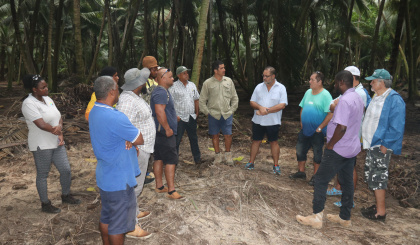 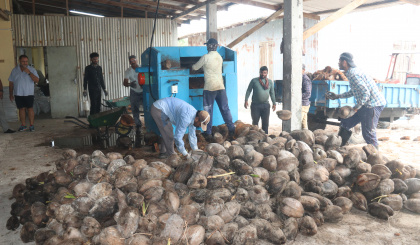 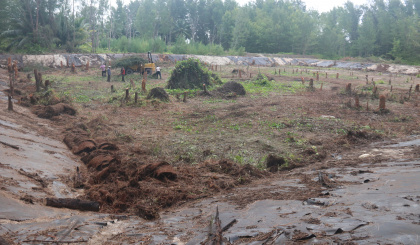