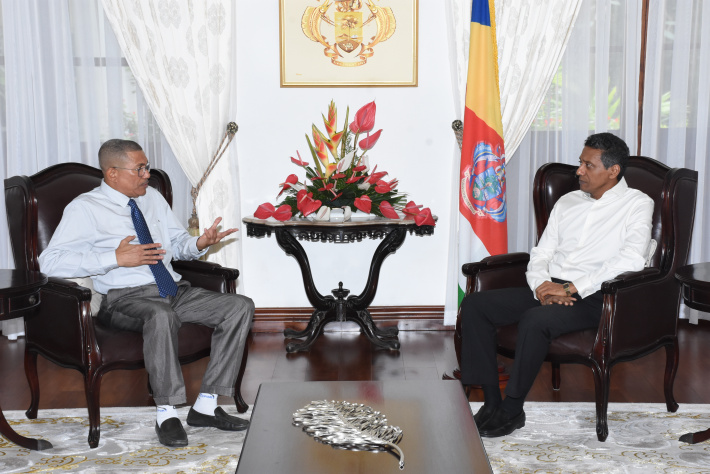 After 33 years as a member of the National Assembly, the leader of government business (LGB), Charles De Comarmond, who was until yesterday also the elected member for Cascade, is set to retire as a parliamentarian.

As such, he will not stand as the United Seychelles candidate for the Cascade district in the upcoming National Assembly election later this year.

Honourable De Comarmond revealed to the press his intention to retire from the National Assembly after he had paid a courtesy visit to President Danny Faure yesterday afternoon to inform him (the president) of his decision.

He said he also presented a letter to the president, thanking him for the good working relationship they’ve had over the past years.

“On account of the confidence I’ve had in the president and the confidence that he and the party have had in me, I think it is normal and a pleasure on my side to come and say thank you for maintaining our confidences in each other,” he said.

He said that he is vacating the position to an already chosen younger successor for the district of Cascade as he believes in shared responsibility.

“One cannot hold on to a position years upon years and it’s good that I vacate the position as I am still alive so that I could be able to guide my successor as I have institutional memory of the many developments and activities of Cascade district,” he said, noting that United Seychelles has trained many young Seychellois and they should be given the chance to take responsible roles within the party.

He stated that though he will no longer stand as a National Assembly candidate for his district, he will as a member continue to help United Seychelles in implementing its programme.

He said that his retirement from National Assembly activities will give him ample time to attend to his personal projects, including in sports and culture.

Hon. De Comarmond, who has also worked as leader of government business for both former President James Michel and President Faure, said that he was enormously happy to have witnessed the evolution of the National Assembly over the years since the one party state to now.

He described the evolution of the National Assembly as positive leap progression.

He said that the state of Cascade district now, in terms of infrastructure, is one among his greatest achievements as the district’s elected member of the National Assembly.

He thanked the electorate of the district for their trust in him.

“Compared to when I started way back then, Cascade has today developed enormously,” he said, making reference to Saint Andre Village which is a very beautiful housing estate.

Commenting on the resignation of his colleague Honourable Waven William as an elected member for Grand Anse Mahe for United Seychelles, Hon. De Comarmond said that in a our democracy one is free to make his or her own choice.