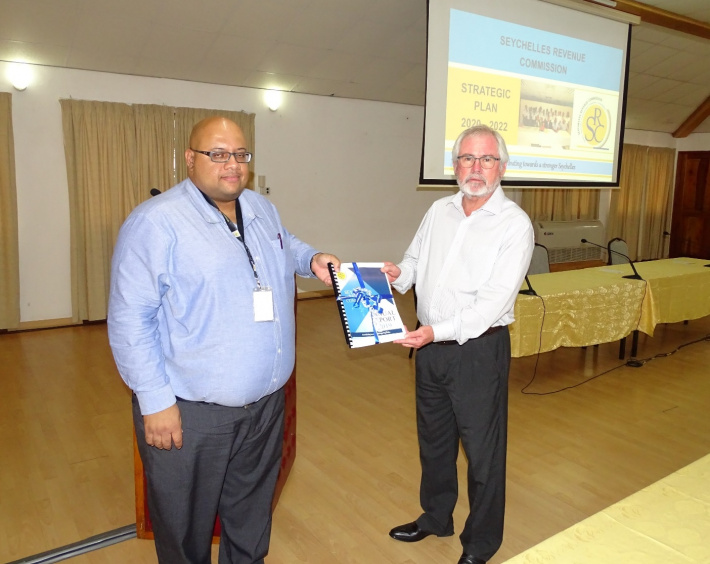 The Seychelles Revenue Commission (SRC) has presented the Minister for Finance, Trade, Investment and Economic Planning, Ambassador Maurice Loustau-Lalanne, with its Annual Report for the financial year 2019.

This was done in a ceremony held on Friday July 31, 2020 at the STC conference room on Latanier Road, Victoria.

The short ceremony comprised firstly of a presentation based on SRC’s strategic plan for the year 2020 to the year 2022, followed by a brief highlight of SRC’s performance for the year 2019. This was delivered by SRC’s deputy Commissioner General, Fred Morel. He also handed over two documents to Ambassador Loustau-Lalanne - (i) SRC’s Strategic Plan for the year 2020 - 2022, and (ii) SRC’s Annual Report for the financial year 2019.

“SRC has managed to maintain a more than satisfactory level of revenue collection despite the various challenges we faced. The attainment of our target is attributed to the unwavering commitment and dedication by the staff of the SRC. I am pleased to report that the SRC continues to reach greater heights while remaining dedicated to the realisation of its core mandate of improving revenue collection and administration in Seychelles. In the period under review (2019), SRC made significant strides in tax collection, trade facilitation and curbing illicit trade at the country’s borders. The positive outcome delivered by the team at SRC has proven once again that nothing is impossible if we maintain a positive attitude,” said Mr Morel.

SRC’s overall collection for 2019 was R7.201 billion compared to R7.205 billion in 2018. This represents a decrease of about R4 million. The deputy Commissioner General also highlighted the increase in taxpayers and imports compared to the financial year 2018 and 2017.

The ceremony then concluded with a few encouraging remarks from Ambassador Loustau-Lalanne, where he not only highly commended SRC for its hard work but also for its determination towards achieving its goals.

Ambassador Loustau-Lalanne seized the opportunity to thank all the staff of SRC who in one way or another have assisted and contributed immensely towards the hard work that the FA4JR Committee and its Appeals Committee have been doing over the past couple of months. Special mention was also made by the ambassador to Luisa Woodcock and to Mr Morel, two representatives of SRC who are members of the FA4JR committee.

Text and photos contributed by SRC 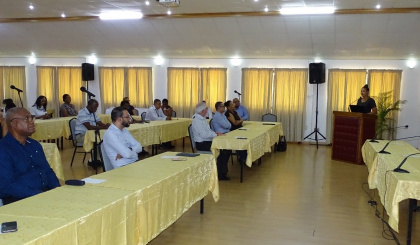