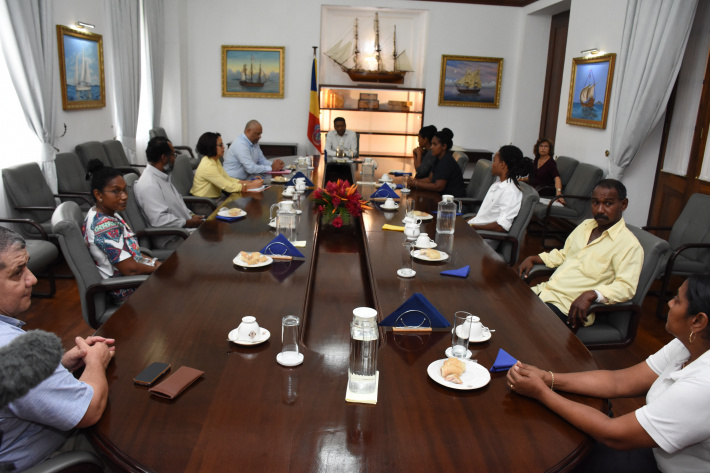 President Faure during the meeting yesterday with the families of the accident victims (Photo: Joena Meme)

President Danny Faure yesterday made known of his intention to establish a commission of enquiry in the Sea Horse marine incident which occurred two years ago.

This was announced by Attorney General Frank Ally yesterday following a meeting between President Faure and the families of the three Seychellois who perished when the vessel caught fire.

The landing craft Sea Horse, which was operated and managed by the Islands Development Company (IDC), caught fire early morning on August 24, 2018 off the coast of Coetivy. A fifth crew member, also Seychellois, survived the incident by jumping off the vessel.

President Faure’s decision to set up a commission of enquiry in the Sea Horse incident comes after a recent Supreme Court decision which nullified the Marine Accident Investigation (MAIB) report on the incident.

“We were given an opportunity to explain to the families the decision of the Supreme Court and we also took the opportunity to discuss the outcome of the enquiry under the presumption of death Act to declare the crew members dead.

“After discussions with the families, the president took the decision to appoint a commission of enquiry to investigate the incident and to present its findings to the president,” revealed Mr Ally.

The commission will be presided by a judge and appointments will be made over the course of the next two weeks.

Mr Ally highlighted that the setting up of a commission of enquiry is the most sensible thing to do to bring comfort to the families.

“We have explained the length of time it will take for the commission to finalise its investigations but the families have understood, and are willing to wait for a well conducted investigation to provide some answers to their questions,” said Mr Ally.

As for compensation, he explained that “the government is not in a position to discuss the issue of compensation; the families are expected to meet with the management of IDC in that regard”.

Compensation claims can now be pursued with the recent presumption of death declaration but this will involve the deceased crew members’ employer IDC, the insurance company and the owner of the vessel.