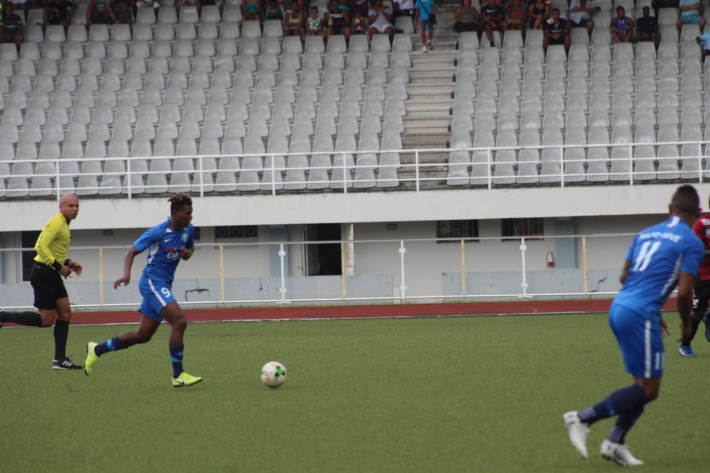 James (with ball) bagged a brace for St Louis against Revengers

St Louis smashed seven goals past hapless Revengers to end the season on a high with an emphatic 7-0 victory at Stad Amitié on Saturday afternoon to bring the curtains down on the 2019-2020 Premier League season.

St Louis were eager to finish the season with a flourish and they opened the floodgate as early as the 8th minute through a penalty awarded by referee Kerens Yocette which was duly converted by Nigerian striker Joseph James who fired past Revengers goalkeeper Denis Fideria who has been deputising for their captain and number one goalkeeper Gino Melanie who has been unavailable for their last three matches, to make it 1-0.

St Louis though had to wait until the 41st minute to increase their lead courtesy of a goal by Karl Hall for a 2-0 advantage at half-time.

James bagged his brace as he netted in the 52nd minute for a 3-0 score and three minutes later Dean Mothé made it 4-0.

LightStars then lost goalkeeper Fideria to a hand injury and with no reserve goalkeeper, coach Neddy Rose had to send outfield player Francis Louise in goal.

St Louis did not relent as they added three more goals as Urry Bibi made it 5-0 in the 63rd minute and two minutes late, Malagasy Georges Kalo got on the scoresheet for a 6-0 advantage.

Hubert Jean completed the rout as he put the icing on the cake in the 82nd minute for a whopping 7-0 scoreline which pleased their manager Davis Khan when he spoke to Sports NATION after the match.

“It was a very good result to end a not-so-successful season as we failed to defend our SFF Cup and only finished in fourth position in the league which is quite disappointing and we must improve next season,” claimed the St Louis manager.

As for Revengers coach Neddy Rose, he admitted that his team tried to play but met a much stronger opponent who was superior to them.