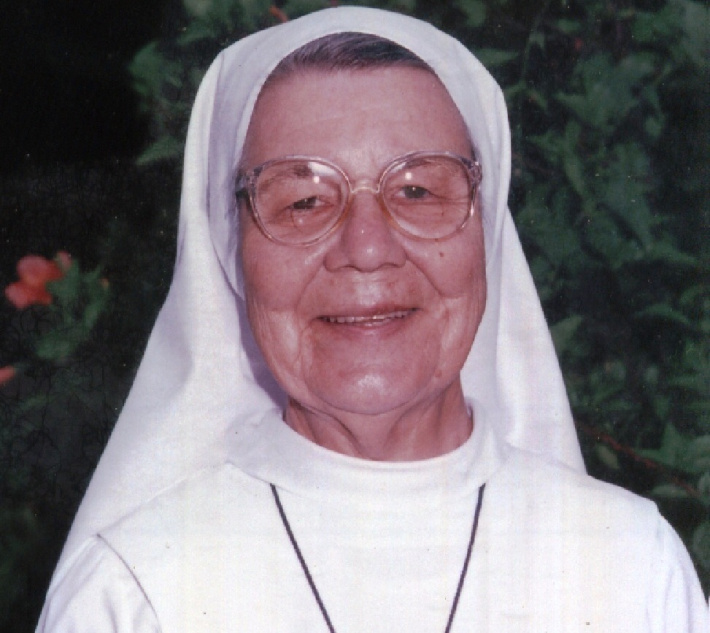 Sister Mechtilde Pothin, a member of the Sisters of St Joseph of Cluny congregation known for her long career as a teacher and head teacher, has passed away at the age of 98 years old.

Sister Mechtilde peacefully left this world in the early morning of August 7 at the St Joseph Convent. Her funeral service was held yesterday afternoon at the Cathedral of the Immaculate conception before she was laid to rest at Beauvoire cemetery at La Misère.

The following information about Sister Mechtilde’s life and teaching career is part of the eulogy that Sister Maria-Nita Servina, also from the same congregation, read at her funeral service yesterday.

Born 98 years ago, on November 15, 1921, Zita, Lise Pothin was the youngest child of Raynald Pothin and Louisa born Savy. There were two siblings before her; her sister Anne who became a nurse and her brother Emmanuel.

She was born at Anse Des Genets and did her schooling mostly at Plaisance where she grew up. Most probably, this was where she became a great admirer of Ste Theresa of the Child Jesus – her favourite saint and best friend.

After her schooling, Lise was admitted to the Catholic School of Education established by Bishop Olivier Maradan, which was directed by the Sisters of St Joseph of Cluny and did her training to become a teacher from 1937 -1939. She used to say that her frequent contacts with the nuns there increased her attraction for religious life which she had felt as a child on the day of her First Holy Communion.

After her training she started her teaching career – a career that spanned from 1940 to 1982, educating so many pupils over all these long years. She taught at Victoria Roman Catholic School from 1941-1942 and then Ste Thérèse, Plaisance School as head teacher from 1943 to 1945 when she entered the Convent.

So, her decision was made. At the end of the war of 1940-1944, Lise said goodbye to her parents and siblings and entered the Novitiate in Victoria on August 6, 1945.

“Is it a coincidence or God’s plan for her that 75 years and one day later God called her to Himself to enjoy eternal life?”

That day she arrived at the St Joseph Convent accompanied by two of her cousins, Simone and Sonia Hickey, who stayed on with her and became Sister Margaret. Two others started Novitiate with them, Sister Catherine Morel and Sister Germaine Payet. Lise then became Soeur Mechtilde de l’Eucharistie and bloomed where she was planted, keeping her parents, siblings and cousins in her prayers and close to her heart. She had a great sense of humour which brightened life for the others. Her prayer life was also of paramount importance to her – nothing done without praying.

She made her first profession in September 1948 together with her three companions and received her Obedience for Ste Therese School in Victoria. On September 2, 1954 she made her Final Profession and soon after she was sent to Cascade for a short time and then to Anse Royale as teacher and organist in the parish.

In January 1961, Sister Mechtilde returned to Ste Therese School, this time as the headmistress. This is what she had to say about the school:

“We always love our first field of apostolate. Also, I have always loved, supported and above all appreciated the teachers and students under my direction, particularly at Ste Thérèse where I worked for more than 13 years. I was the big sister to about thirty teachers and a few hundred students. We were a big family.”

In 1961 Sister Mechtilde did a music and harmonization course and in 1966 she went to London for further studies and again in 1973 she went to France. Sister Mechtilde has had her share of leading different communities: In 1974 she was at St Joseph in Victoria and in 1978 she was sent to Regina Mundi Convent in Mont Fleuri. In 1982 she had to give up teaching to assume responsibility for the Vice-Province of Seychelles – the first Seychellois to become Provincial since the foundation in 1861. From January 1983 until January 1992 she led the Vice-Province with a great spirit of service and integrity, working hard towards “vocation promotion”.

The seeds that she had sown have grown… She had a great love for the Vice-Province and its mission. She was a woman of prayer and had a deep faith in God and His Holy Will.

When she passed the torch of leadership to Sister Claire Houareau, in January 1992, she did not remain inactive. Again she was appointed Superior at St Joseph, then Anse Royale, Roche Caiman and back to St Joseph until 2007.

She also used to go to Ile Denis to bring the Good News to the workers. Likewise, every Friday she went to Long Island prison and twice a week she visited the sick at the Seychelles Hospital. Sister Mechtilde was never inactive. She was very artistic as well and could transform anything old or discarded into something beautiful and useful.

Often times, after her retirement at St Joseph in 2007, one will go to her room and find her busy with her hand making objects that she would give to the Sisters as gifts for their birthdays or feast days. She has been a model of devotion for many of us and each of us has our own memories of her.

“I myself have been blessed to have known her and she was a great mentor and support to me when I started my first steps as provincial leader and even as a postulant in 1985," Sister Nita said.

The Lord has granted her the opportunity to live the ripe old age of 98 years and nine months before calling her to eternal life.

May her soul rest in eternal peace.