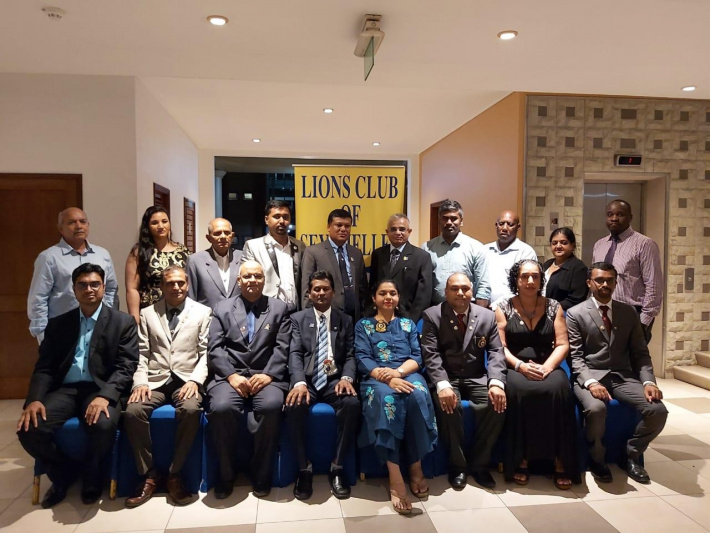 New members of the Lions Club of Seychelles were officially inducted and sworn in for the Lionistic year 2020-2021 during a brief ceremony at Espace Building on Saturday July 25.

During the ceremony Lion Reggie Jayasena was installed as the club’s new president, taking over the baton from Lion Rajesh Pandaya.

The ceremony took place in the presence of Lions and members of various  clubs and was graced by the presence of Zone chairperson Lion Sashi Senthilkumar, Lion Ruth  Mohotti, Lion Selvi Karunakran, Lion Dhana Sasikumar, charter president  of  Centennial Women’s Lions Club who was also MC for the evening.

The event started off with the customary lions roar followed by a Lions toast in which the Lions proposed a toast to the health of the President of the Republic of Seychelles Danny Faure and to the international lions clubs.

Outgoing president of Lions Club of Seychelles (LCS) Rajesh Pandaya then addressed all present, welcoming all to the installation ceremony of Lion Year 2020-21.

“I am privileged to have been the president of the LCS for the past year. I am thankful to you all for supporting me throughout the year. I strove to live by the motto of the Lions ‘We serve’. During my tenure LCS carried forward the kidney, diabetes and blood pressure non-communicable disease screening programme. The programme benefitted companies with the largest work force such as SPTC, SPDF and Seypec. LCS constructed one bus shelter at Anse Etoile. LCS under its signature activity for environment and serve to strengthen the relationship between the community and its environment installed three information sign boards for wetlands at Port Glaud, Anse Boileau and Cascade. I joined the club four years ago and I had an opportunity to work with three dynamic LCS presidents – Lion Ramu, Lion Sasikumar and Lion Sharma. They motivated me to take up the challenge of being the club president. I am sure they will continue to guide the next generation of Lions. I wish to add here that the last year was not a smooth sailing. The Covid-19 pandemic resulting in restrictions on outdoor activities and social distancing caused the stoppage of health screening projects. With this note I pass on the baton to the incoming president Lion Reggie Jayasena. I am sure that he will carry out his duty as president diligently and with more vigour.”

The new president mentioned that his plan includes a medical camp to be organised for the screening of diabetes, vision, kidney and other ailments with the help of medical staff, school and child development programmes island wide (one project for one school), teacher training programmes for stress management, lecturing and yoga exercises by Dr Trupti, programme for disabled children, hunger elimination programme, environment and wetland conservation programme, among others.

Subsequently outgoing President Lion Rajesh Pandaya honoured all members of Lions Club for their innovative ideas and contributions to society.

Besides a new president, there were several district offer appointments for the Lionistic year 2020-2021. Lion D.V. Sharma was inducted as District Officer for Vision & Sight for kids, Lion Dr Sasikumar for Diabetes, Lion Rajesh Pandaya  for hunger for Mombasa and Seychelles (Region E).

Several awards were also presented during the evening. Such awards were presented to the Lions Clubs of Seychelles by District Governor Lion Amarpreet Sembi during virtual District 411A convention Awards ceremony in Kenya. These were Best Bus Shelter & Wetland Activity & outstanding Zone Chairperson, Lion Dr Sasikumar.

There were inspiring messages from District Governor 411A Lion Lion Amarpreet Sembi which was read by Lion D. V. Sharma and incoming DG Lion Joshpat Muthumbi which was ready by Lion Bavesh Goswami.

There were also slide show presentation of various activities.

The accompanying photographs show some highlights of the evening. 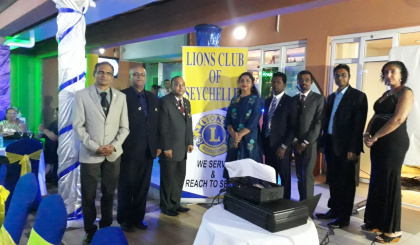 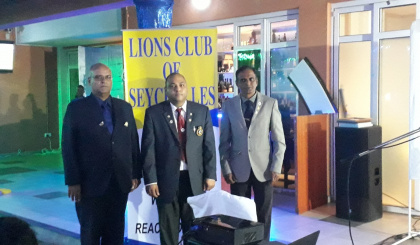 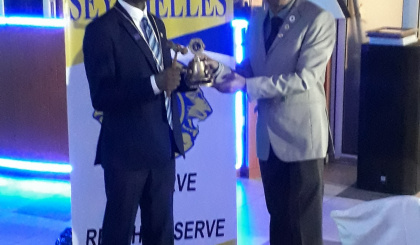