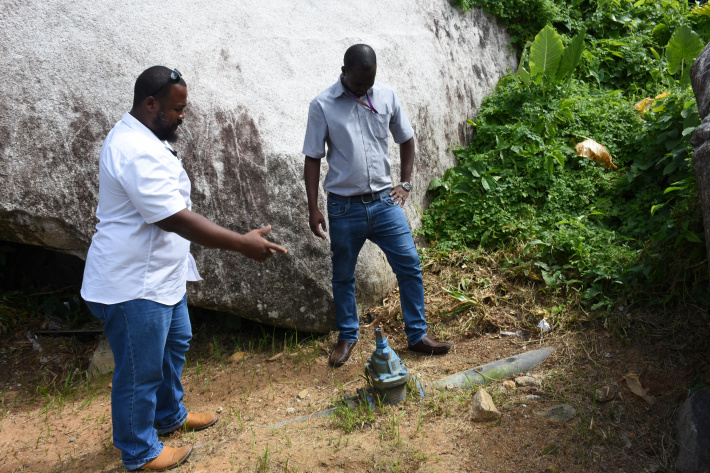 The Public Utilities Corporation has said that it is trying its best to seek wayleave with private land owners in the areas of Mont Buxton and Roche Bois so as to be able to change old asbestos cement pipe passing on their properties that are causing water interruptions through constant bursting.

It was the project director of Public Utilities Corporation (PUC) water division, Michel Bristol who made the statement to the press yesterday afternoon, following a guided tour in Roche Bois where PUC had replaced one damaged asbestos cement pipe with the high-density polyethylene (HDPE) pipe. Also present was Ibrabima Diallo, the general manager for water.

PUC had been experiencing problems lately with delivering water supplies mostly to residents of Mont Buxton due to low pressure and constant bursting, at different locations in the area of Roche Bois, of the old underground asbestos cement pipe coming all the way from the Le Niol water treatment plant. The frequent pipe bursts and low water pressure are most common during the weekends and as a result of the constant interruption in the water supply, there has been an outcry among the residents of Mont Buxton on social media lately.

Mr Bristol said that as part of PUC’s efforts to fix the problem, a project to change the pipeline from the Le Niol treatment plant all the way to Mont Buxton is already in place.

“We are in the process of negotiating with the private land owners including contacting the local proxy of those living abroad and if we succeed in getting their permission to do this work, we intend to complete this project by the end of this year,” said Mr Bristol.

He added that PUC has changed most of the colonial era asbestos cement pipes on Mahé, Praslin and La Digue, with only a few left to be changed in a future project.

As for Mr Diallo, he said the old asbestos cement pipes need to be replaced as they cannot sustain the water pressure passing through them, resulting in the pipes bursting.

“Each time we try to adjust the water pressure so that the residents of Mont Buxton could get high pressured water in their system, we end up with bursting pipes. If we are not informed where the burst pipes are located, locating them takes time along with gathering a lot of resources to mend them. This is why sometimes it takes a long time to restore water in the affected areas,” Mr Diallo said, noting that apart from using high-density polyethylene (HDPE) pipe as replacements for the asbestos cement pipes, PUC is also using ductile iron (DI) pipes. 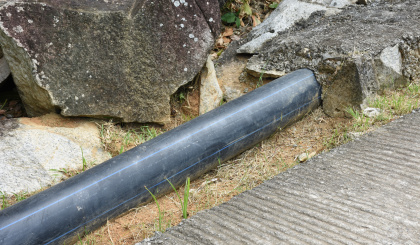