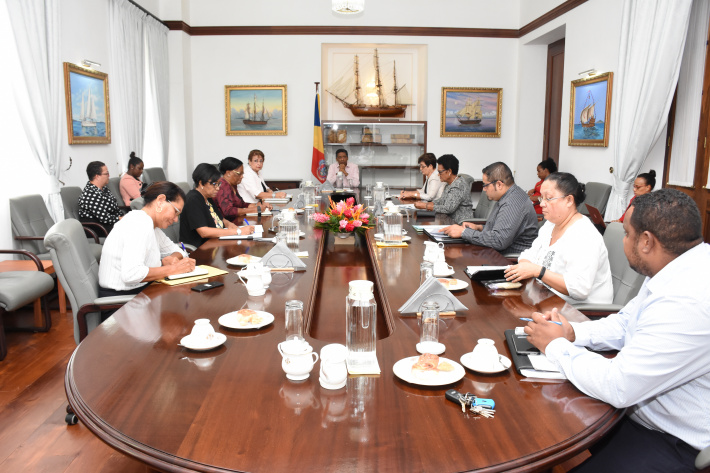 The psychosocial support committee held its first meeting yesterday at State House and was chaired by President Danny Faure.

The aim of the meeting was to ensure the provision of psychosocial support services for citizens in the country.

The committee will come into effect latest September in order to attend to the need of the population in a more coordinated way.

The president created a high-level committee to set up a National Psychosocial Support Services platform which will be chaired by the secretary of state (SS) for Health, Marie-Pierre Lloyd.

This committee will offer various kinds of mental health and psychosocial support and services required by citizens, including counselling, coping with uncertainty, mental health support, parental assistance and budget management.

Ensuing discussions centred on addressing any gaps in the proposed service in areas such as communication and education, designating focal contacts, and clarifying the various roles and responsibilities.

After the meeting, SS Lloyd and Anna-Lisa Labiche, clinical psychologist in the department of health, met with the press to explain the importance of the meeting.

“This time of crisis is generating stress throughout the population and this psychosocial support committee is being set up to support mental and psychosocial well-being in different target groups during the outbreak. In March we met informally for the first time to look at the Covid-19 and what we need to do to ensure that the people get the support they need. The meeting of this morning was a high level one and brought together all the stakeholders related to psychosocial services and support. It was chaired by the president. Some people need social support like housing, some financial support and others psychological support. People have been having many uncertainties about their jobs, about the opening of the airport and fears about Covid-19 in general. The group will come into effect latest September after the group has a formal structure. It will be a mechanism to monitor the impact of Covid-19 as we go along,” noted SS Lloyd.

She stressed on the fact that the members of this group will be helping the population out there and the group will be the mechanism that nationally will look at the impact so that we can inform for policy or services to be improved. We have noted that what was lacking was people did not know where to go to get assistance instead of roaming around.”

Ms Labiche noted that “we have seen an increase in people looking for help. They have not come directly to us, but we are hearing from the different stakeholders. We also have this group of people who were already affected with anxiety and stress and we need to cater for them also. This committee is not addressing anxiety from Covid-19 only but for all crisis”.