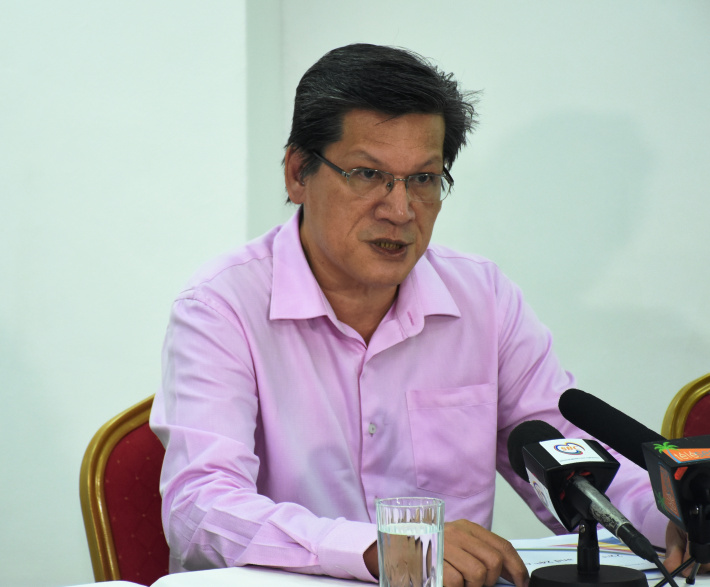 Mr Lucas and his team during the press meet yesterday (Photo: Thomas Meriton)

The Presidential and National Assembly elections will take place simultaneously on October 22, 23 and 24, the chairperson of the Electoral Commission Danny Lucas announced yesterday.

Following the announcement, after publication of the election dates in the Official Gazette, the voters’ register is now closed for all transactions.

The commission will no longer accept any new applications, changes and objections on the register with immediate effect, while the Short Message Service (SMS) number 6900 will reflect the register certified on March 31, 2020 until the final voters’ register for the upcoming elections is certified.

Based on the changes in the elections Act, several areas such as alphabetical voting, incapacitated voters and the form of ballot paper have been highlighted, or targeted by the commission.

The commission has also set up qualifications and criteria for presidential and National Assembly candidates, who must both be a citizen of Seychelles.

As for the requirements for nomination day, presidential candidates should have the consent of his or her political party if not an independent candidate, nomination form, designation of vice-president, notarised consent of vice- president, the list of 500 supporters, national identity cards of all supporters who have signed (subject to assent), two passport-size photos (hard and digital copies), the candidate’s symbol (hard and digital copies) and certificate of deposit.

Candidates for the National Assembly elections will have to submit the same credentials, except for a list of 50 supporters, instead of 500.

According to Mr Lucas, a total of R15 million which was initially budgeted for the presidential election will now cater for both elections, while additional funding will be put in place in case of need.

As for the ballot papers, Mr Lucas noted that they are in contact with local and foreign print houses for potential contractors capable of meeting the print specifications, while the election ballot papers are set to be the most secured ever used in local elections.

President Faure publicly announced his intention to dissolve the sixth National Assembly in the spirit of national interest.

His signed proclamation for dissolution reads: “Conscious that the existing Covid-19 pandemic necessitates the need for a National Assembly that has a common vision with the President elected in 2020 in order to immediately implement legislative measures, plans and policies to revive the economy and to tackle socio-economic and environmental challenges; and considerate of the fact that Covid-19 will impact the cost of elections in a multitude of ways if Seychelles holds presidential election and National Assembly election at separate intervals, the President gave the Speaker of the National Assembly seven days’ notice of the intention to dissolve the National Assembly on July 30, 2020.”