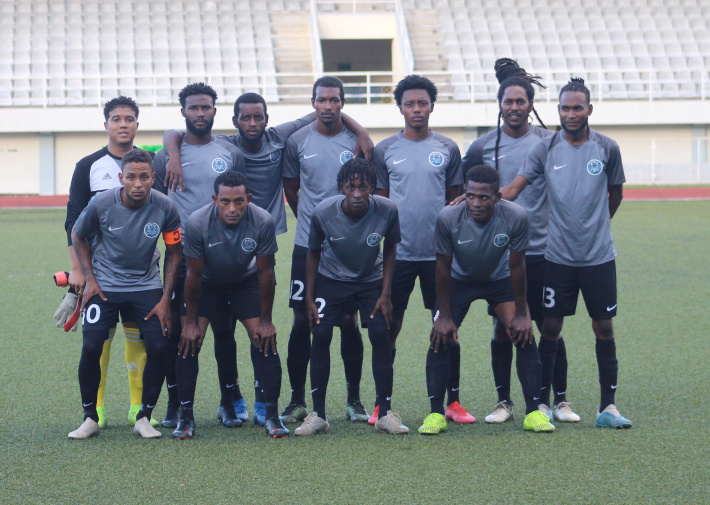 Championship One runners-up St John Bosco have gained promotion to the SeyPearl Premier League with a convincing 3-0 victory over 11th placed top division side Au Cap on Tuesday afternoon at Stad Linite in their playoff match.

St John Bosco had narrowly missed out on automatic promotion when they conceded a last-gasp equaliser against eventual champions Real Maldives in the Championship One league decider. As a result they were highly motivated in this one-off clash against Au Cap who had decided to stay away from the league after the Covid-19 break which meant they had been out of action for five months.

Therefore, St John Bosco were the team with the momentum and it showed in this encounter as they dominated proceedings from the word go and should have gone ahead as early as the 7th minute after captain Randolph Elizabeth pounced on an error by two Au Cap players, namely Joshua Morel and Carlos Andre, but his shot was deflected into corner.

In the 21st minute, Ernesta had an even better opportunity to break the deadlock as he latched onto captain Elizabeth’s brilliant through ball but Au Cap goalkeeper Barra blocked his initial shot and Ernesta shot wayward the loose ball to waste a great chance.

Au Cap should have punished their opponents’ prolificacy a minute later as Marcus Louys broke clear on the left to pick out the unmarked Medric Jean-Baptiste but his strong shot at close range was charged down by St John Bosco goalkeeper Duane Romain.

St John Bosco though still created the better chances such as in the 39th minute when Yves Zialor held the ball well before slipping a beautiful pass to Ernesta but again he was denied by goalkeeper Barra.

The players of coach Vivian Bothe finally found a breakthrough on the stroke of half-time as Zialor lofted the ball into the path of Elizabeth who beat the Au Cap offside trap to stab the ball into the net for a 1-0 score at the break.

St John Bosco picked up where they left off in the second period and captain Elizabeth should have hit the target with a free header in the 50th minute after Zialor played a short corner to Terry Lesperance whose inswinging cross dropped invitingly to his skipper but he failed to hit the back of the net.

The Pointe Larue-based team though stretched their lead with a sweet move in the 57th minute as Zialor sent Ernesta galloping down the line and the winger’s inch perfect cross across the Au Cap goalmouth was rammed home by Saidou Jean-Baptiste to make it 2-0.

Au Cap, who had struggled to cope with their opponents, nearly cut the deficit in the 81st minute from captain Wallus Mondon’s teasing free kick but Carlos André just could not connect to the clear goal scoring opportunity.

St John Bosco put the icing on the cake in the 90th minute as substitute Deroy Brutus wriggled his way on the edge of the Au Cap penalty area before filtering the ball to Ernesta who placed the ball into the far corner past goalkeeper Barra for a final 3-0 score to guarantee their promotion to the top flight, much to the approval of coach Bothe when he spoke to Sports NATION after the match.

“We dominated this match and had numerous scoring opportunities in the first half but we are just glad to win and gain promotion though our objective this season was to win the championship and secure automatic promotion. But we are still happy to return to the Premier League after a two-year absence,” the St John Bosco coach told Sports NATION.

As for Au Cap manager Nichol Dogley, he was rather philosophical about relegation as he contemplated life in the Championship One as an opportunity to re-organise the team.

“I’m not surprised with our relegation as it has been a tough season for us where we have found the going really tough and some thought we had closed down when we did not take part in the remaining league matches, but we met up three weeks ago to prepare for this playoff match. As for our demise to the lower division, I feel it will be better for us to rebuild especially during these difficult times,” manager Dogley related to Sports NATION. 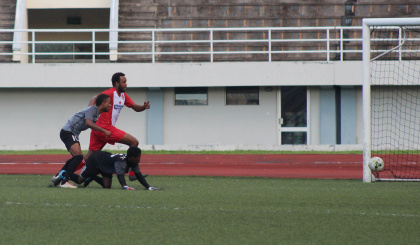