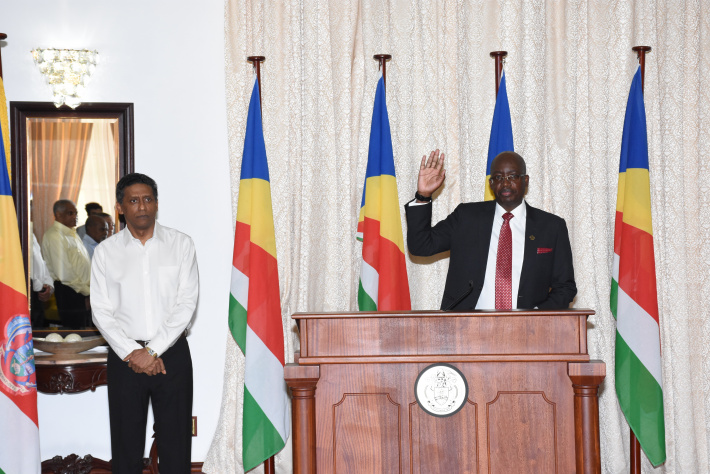 The Court of Appeal now has a full bench of Justices of Appeal following the appointment and swearing in of a new resident justice of appeal, Justice Professor Oagile Betheul Key Dingake.

Justice Dingake, a Batswana, took the oath of allegiance to the Seychelles Constitution and the judicial oath before President Danny Faure at State House yesterday.

President Faure appointed Justice Professor Dingake upon recommendations made by the Constitutional Appointments Authority (CAA) pursuant to Article 123 of the Constitution.

The brief ceremony was attended by Attorney General Frank Ally, members of the CAA, secretary of state for cabinet affairs Mohammed Afif, Chief Justice of the Supreme Court Mathilda Twomey, President of the Court of Appeal Anthony Fernando and Justice of Appeal Fiona Robinson.

His career has extended across academia, the legal field, the private sector and judiciary, having served for more than a decade as a Judge of the Botswana High Court and facilitated numerous judges training in the Southern African Development Community (SADC) region including Seychelles.

Justice Professor Dingake has authored a number of books and has published on the role of the judiciary in protecting the rights of vulnerable groups.

“I have been in the judiciary for a very long time, for a period in excess of 15 years,” Justice Prof. Dingake told members of the press yesterday.

“As part of the Seychelles’ Court of Appeal, I will be dealing with whatever is put on my table since I understand that there is no specialisation here. My colleagues and I will preside on and determine any appeal from the Supreme Court or the Constitutional Court,” he added.

He fills in the vacant seat left by Justice Fernando when the latter assumed the post of the President of the Court of Appeal in June 2020.

The Court of Appeal resumed its work on August 1 with its first session of the year after being delayed by the coronavirus pandemic. It has heard around 25 appeal cases since – some of which Justice Tibatemwa sat on via video conferencing – and will deliver its judgments later this month.

“I am proud to say that we have been able to go through these cases and concluded the hearings. We are scheduled to deliver on August 21 and that is with one judge sitting in Uganda using Cisco webex,” Justice Fernando explained.

A second appeal session has been scheduled for December 3.