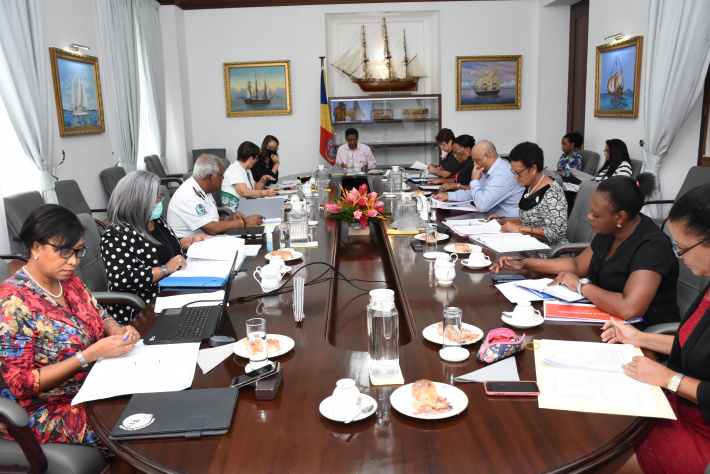 The high-level committee during the meeting yesterday (Photo: Joena Meme)

As a safety measure against child abuse, the high-level committee on child protection has among its recommendations taken the decision to make provisions for people to pass through some sort of security check and further be trained on child protection before being allowed to work or deal with children.

It was Designated Minister Macsuzy Mondon, who is also responsible for Home Affairs and Local Government, who made the statement in a press briefing after attending a second technical meeting of the high-level committee chaired by President Danny Faure yesterday morning at State House.

She also stated that the committee is working towards drafting a national plan on child protection that will encapsulate all recommendations among which will feature a national body that will oversee the work of all the sectors involved in dealing with children.

The National Commission for Child Protection (NCCP), a sub high-level committee which currently oversees all sectors involved in dealing with children, has been seen to be lacking in power in its current status and will in future be turned into an authorised body with certain powers to delegate.

“The major decision taken by the committee today is to develop a national action plan for child protection with all the recommendations due for implementation as the second phase of our work, including the necessary time frame and financial aspect for us to implement the plan, which will be presented to government in the next three months (November2020),” Designated Minister Mondon said.

She also said that the committee has recommended, among others, for a one-stop child-friendly facility for child protection services.

“Instead of having to bring a traumatized child at different places for either an investigation among other purposes, he or she will be assisted by relevant stakeholders all under one roof,” the minister added.

Following the first technical meeting in May, 2020, the committee, through different groups, was assigned to put the child protection services in the country under the microscope so as to see what is working and what is not working in a bid to address the gaps that currently exist.

Designated Minister Mondon said that President Faure was briefed on the committee’s work done during the past three months with regard to ongoing process of continued work with stakeholders dealing with children so as to address gaps in the laws, structures, rules and services in relation to child protection.

With regard to addressing gaps in the laws in relation to child abuses, the principal secretary for Social Affairs, Linda William Melanie, said that the sub-group committee of the high-level committee on child protection, is working to revise the penal code but at the moment the judgment in cases of child abuse will be based on the current penal code.

On her part, the secretary of state for Health, Marie-Pierre Lloyd, said that a more collaborative effort between all stakeholders, involved in child issues, needs to be taken more seriously for positive outcomes for the benefit of children.

Other members of the high-level committee include the Chief Justice, Mathilda Twomey; the Minister for Family Affairs, Mitcy Larue; the Minister for Education and Human Resource Development, Jeanne Simeon; the Commissioner of Police, Kishnan Labonte; the Attorney General, Frank Ally; the chairperson of the National Commission for Child Protection, Dr Erna Athanasius and the deputy cabinet secretary for Policy Affairs, Margaret Moumou.