Farmers get the thumbs up from agriculture minister | 14 August 2020 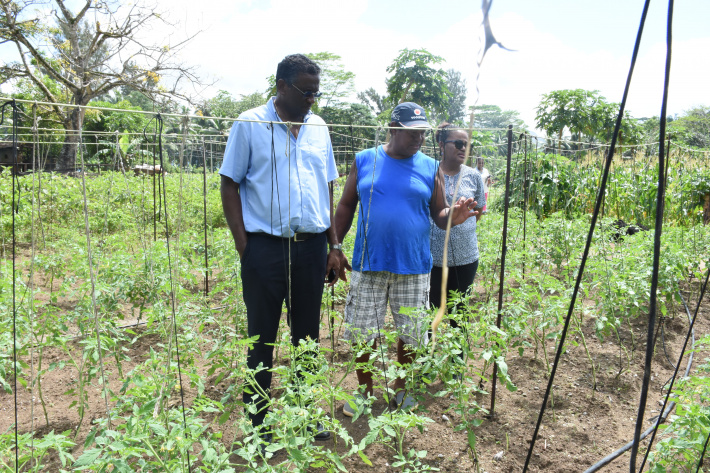 Local farmers are working hard to produce, all in line with the government’s vision to expand the domestic food supply base to improve the local contributions to the country’s food security status.

Minister for Fisheries and Agriculture Charles Bastienne made the statement yesterday as part of his feedbacks following his routine visits at several farms in the Anse Boileau and Au Cap districts.

The visits were also opportunities for the farmers to voice out their concerns and the different challenges hampering their productivity.

Altogether, Minister Bastienne visited seven farms, including a private-owned property at Anse Louis which is being transformed into a valley fruit farm.

The property belongs to local businessman Octave Tirant and is being managed by Luc Gedeon.

According to Mr Gedeon, who is also an importer, the idea to venture into a valley fruit farm has been sparked by the increase in importation of fruits, especially those that adapt well to our climate and could be produced locally.

The list includes citrus fruits and assorted ones such as watermelon and pineapple.

He explained that such a project will also help the local economy, especially in keeping the small amount of foreign exchange in the country, instead of using it to purchase fruits which can be easily produced locally.

Mr Gedeon added that the project has been pending for over 10 years due to lack of support, until Mr Tirant stepped in.

He further explained that since the valley fruit farm project is a long-term investment, they are also inter-cropping which helps in meeting the cost of the daily running of the farm which runs over 12 acres of land.

Commenting on the project, Minister Bastienne said it should be used as an example by others who have undeveloped land and have not yet decided on what type of development to carry out.

He added that the government is also considering venturing in a ‘fruit bank’ which will, other than supply the country, also propagate and preserve all the local fruit species.

Minister Bastienne also made a stop at the poultry farm of Jean Mellie at Pointe au Sel.

Mr Mellie is presently rearing 6,000 chickens and is planning on bringing in an extra 4,000.

He explained that with the introduction of the agriculture comprehensive plan, it is now easy to sell poultry products locally, compared to previously when local farmers struggled to sell their products due to the increase in importation.

Regarding imported poultry products, Mr Mellie said it is still a problem since most of the local importers are also operating under a farmer’s licence. This, he said, allows them to sell their imported products under the farmer’s umbrella.

Several other farms were visited yesterday by Minister Bastienne, but for security reasons, some of the farmers did not want any media coverage. 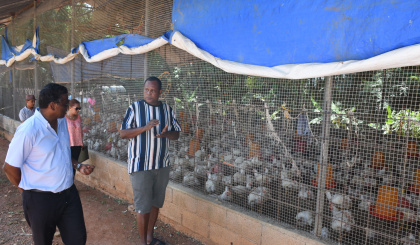 Minister Bastienne during his stop at the poultry farm of Jean Mellie at Pointe au Sel (Photo: Thomas Meriton)