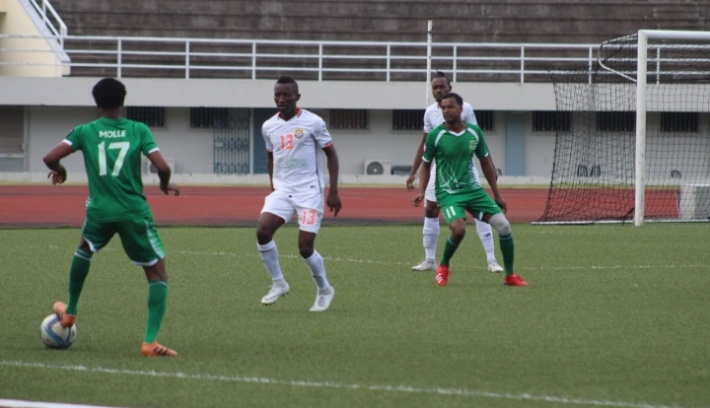 Praslin side Côte d’Or cruised past Championship Two league champions Rovers on a 4-0 score at Stad Amitié on Saturday afternoon to reach the final of the SFF Cup.

The Premiership club went ahead through Nigerian Peter Adeshina for a 1-0 lead and Malagasy Kassah made it 2-0 before half-time.

Andy Brioche increased his team’s advantage early in the second period for a 3-0 scoreline and Malagasy Charles Rakoto netted a late penalty awarded by referee Alix Bonne for a final 4-0 result to help Côte d’Or reach the final and their manager Andre Bedier said his team turned this match in the first half.

“We started well and had a very good first half as our opponents tried to park the bus in the first half but they came out of their shell in the second period and it was an evenly balanced match but we were slightly superior and we are looking forward to the final,” Côte d’Or manger Bedier related to Sports NATION.

As for Rovers coach Collin Stravens, he felt the result does not reflect the match as he said his side gave a good account of themselves against one of the top local teams.

“It was an interesting match and very balanced despite the scoreline as we tried to play but had certain handicap as our goalkeeper got injured but had to persevere as we did not have a replacement. Also one of our key players was injured in training and had to miss this match but this is no excuse as we must not forget that we met a very good opponent and I expect a good final,” Rovers coach Stravens told Sports NATION.

Foresters going for the double

Newly crowned SeyPearl Premier League champions Foresters will be going for the double this Saturday after they blew away their opponents La Passe 5-1 in the first semifinal played at Stad Linite on Thursday which really pleased coach Harold Hoareau.

Foresters started on the front foot as they broke the deadlock early in the first half in the 3rd minute as Brandon Labrosse shot past goalkeeper Ian Ag-King to make it 1-0.

Malagasy Florent almost levelled matters a minute later as his shot came off the foot of the Foresters goalpost.

Foresters doubled their lead in the 25th minute when La Passe defender Jules Constance was robbed of the ball by Nigerian striker Kazeem Adeyeri who then squared the ball to Ryan Henriette to make it 2-0.

Adeyeri should have won a penalty when he was fouled by Kenny Nibourette in the 32nd minute but referee Dario Landrie turned a blind eye.

La Passe cut the deficit in the 38th minute from a Foresters’ defensive mistake and Florent thumped the ball over goalkeeper Kitson Cecile to make it 2-1.

Foresters though were denied another penalty in the 42nd minute after Malagasy Rhino brought down Leroy Corallie from a tackle from behind but amazingly the official allowed play to go on for a 2-1 score at half-time.

La Passe gambled in the second half as they played with three at the back to try and redress the score and Malagasy Rojo should have equalised in the 56th minute with a free header which was easily saved by goalkeeper Cecile.

La Passe huffed and puffed but got caught on the counter in the 83rd minute as Malagasy captain Jean Tigana picked out Ryan Henriette who outsped Adrian Constance who held him back but could not stop the speedy striker to reach the penalty area and centre to Corallie who stabbed the ball home via the post for a 3-1 score.

Foresters won a penalty in the 87th minute when Adeyeri’s replacement, Elijah Lespoir, was scythed down by Nibourette and captain Tigana sent goalkeeper Ah-Kong the wrong way for a 4-1 lead and they completed their revenge on this La Digue side who almost denied them the league title as they added a fifth goal in the 90th minute as substitute Francis Nourrice burst clear to set up Lespoir who tucked the ball home for a final 5-1 scoreline.

Coach Hoareau told Sports NATION that it was a morale-boosting win for his side who are now 90 minutes away from the double.

“We had a very good match especially in the first half where we were even denied two penalties and I must congratulate the players for maintaining their concentration despite an onslaught from our opponents in the second period and we are now aiming for another cup success in the final,” the Foresters coach revealed to Sports NATION.

As for La Passe coach Bruno Saindini, he was left to rue a bad week where they threw away two titles.

“We expected to match our opponents but we conceded two goals very early and therefore we had to make tactical changes in the second half to try and get in the match but it proved a difficult task and we were exposed at the back and I would like to congratulate our opponents and wish them well in the final,” the La Passe coach said. 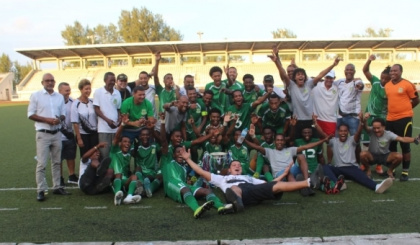