President Faure thanks man for his bravery | 20 August 2020 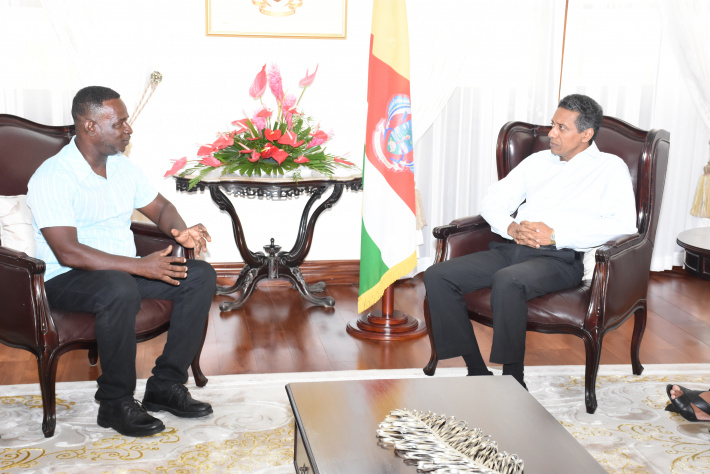 President Danny Faure has congratulated Cliff Mathiot for his bravery in rescuing the 8-year-old girl who was trapped in her home after a fire broke out on Monday at Petit Paris, Cascade.

Yesterday morning the head of state welcomed Mr Mathiot at State House where the latter recounted the ordeal that happened on Monday and how he risked his life saving the little girl.

Speaking to the press after his meeting with President Faure, Mr Mathiot spoke about the event which took place two days ago.

“I was at a nearby house chatting with a neighbour when I heard a cry coming from inside the house. When we went to check we saw that the roof of the house was engulfed in flames. We reacted quickly and I didn’t hesitate to walk inside and rescue the child. Once she was safe outside, we called for help but the fire was already out of control,” said Mr Mathiot.

An ex-military officer and a father himself, Mr Mathiot remarked that he reacted in this way as he would expect someone to do the same if his child was in that situation.

He thanked God for giving him the courage he had that day and he added that it is paramount that our community sticks together especially in these trying times.

An investigation is underway to determine the cause of the fire.