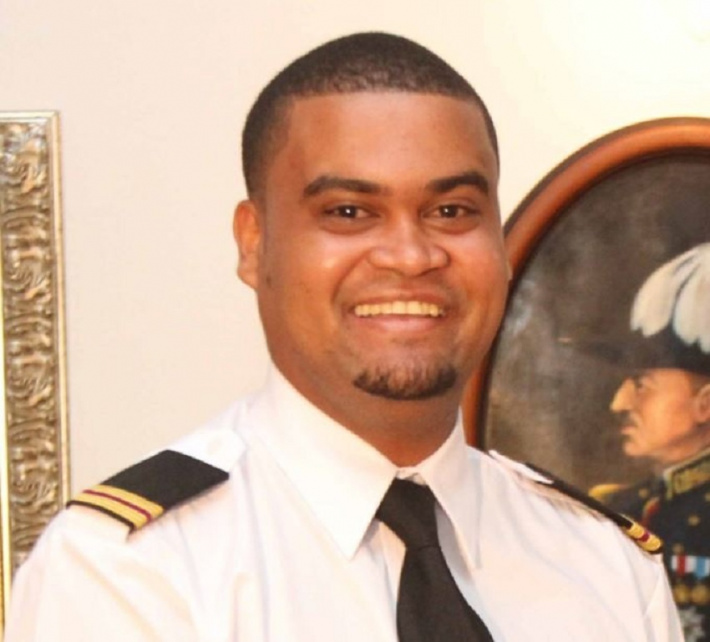 Martin Josa Roucou, 34 years old and hailing from Anse Aux Pins, has made the country proud for having climbed the sailing ranks to become today chief engineer on one of Seypec’s long-haul oil tanker fleet, MT Seychelles Pioneer.

Mr Roucou has risen to this position after being recruited, trained, and employed by the national petroleum company (Seypec), thus opening avenues for his successful career path. The promotion of Mr Roucou is the result of an aggressive and sustainable policy by Seypec to develop a team of trained local seafarers with international qualifications and competencies.

Mr Roucou is a full-fledged graduate from the Maritime College of Ireland (NMCI). In 2018, he was named outstanding student at the NMCI upon completion of his BSC Degree. He had served in several positions in the engineering department of the Seypec tankers worldwide. In November 2006, the former student of Pointe Larue secondary school started his career on board Seychelles Pioneer as engine cadet and this first step propelled him through various positions to date.

Mr Roucou received the ultimate career reward when he took over as chief engineer on a long-haul tanker of Seypec. Until then, this post was always being served by foreign maritime engineers.

“This is indeed a breakthrough in my career and in the history of our tanker fleet,” Mr Roucou told Seychelles NATION. “I have always been a staunch supporter of this declared policy of Seypec to train and promote Seychellois to be international seafarers. This is a tangible result of a forward-looking policy that continues to upgrade careers for our Seychellois compatriots. I am sure there will soon be more Seychellois to be appointed as chief engineers on our deep sea tankers.”

Mr Roucou has now joined the top brass of Seychellois personnel on board the Seypec tankers where many of his compatriots are already in most senior posts. His nomination as a deep-sea chief engineer is yet another milestone in the career development programme designed by Seypec to promote more local competencies within the group of Seychellois presently serving onboard its six tankers.

“This is the start of exciting and responsible times at the command of the engine room on board one of the major Seypec tankers,” Mr Roucou added.

“As chief engineer of the ship, I am the head of the engine room department and I am the sole controlling authority for all machinery systems of the ship. I have the responsibility to ensure that all the systems of the ship function smoothly without any breakdown,” Mr Roucou said confidently, excitedly and proudly.

“Reaching a position of one of the highest commands on a modern tanker owned by a Seychellois company, is definitely the pinnacle of honour for the country’s maritime industry,” Seypec’s chief executive, Conrad Benoiton, told Seychelles NATION. “We are proud that this career-enhancing policy is paying its due dividends. We are indeed proud for having helped to make this young officer attain such objectives at an early stage of his life.”

The successful career of Martin Roucou sets an example to all his cadet and junior officers of what can be achieved through dedication and perseverance. It also represents the development spectrum set by Seypec for all Seychellois youth willing to serve on the fleet of tankers around the world through its bold cohort and cadet training platforms in conjunction with the Seychelles Maritime Academy. This bold initiative, launched in 2014, has already produced six cohorts of 89 seafarers and 10 nautical cadet officers to join the Seypec fleet of tankers. A 7th cohort of 13 students is expected to leave Seychelles for Colombo for their training when the border re-opens due to Covid-19.

Seypec is proud of Mr Roucou’s achievements and its commitment to build the capacity for competent Seychellois to be seafarers on board our fleet of tankers.

“This policy encompasses training at all levels within Seypec: operations, technical, commercial, corporate affairs and security,” CEO Benoiton explained. “Over the past years, Seypec has pursued a sustainable policy to build a competent and flexible workforce capable of meeting the challenges of the international environment. The attainment of Mr Roucou is yet another testimony of this forceful strategy,” said Mr Benoiton. 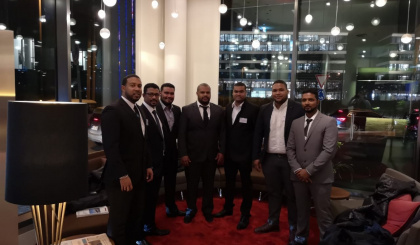 Martin Roucou, fifth from left, at the Bremen’s conference in Germany together with other Seychellois officers (Photo source: Seypec)