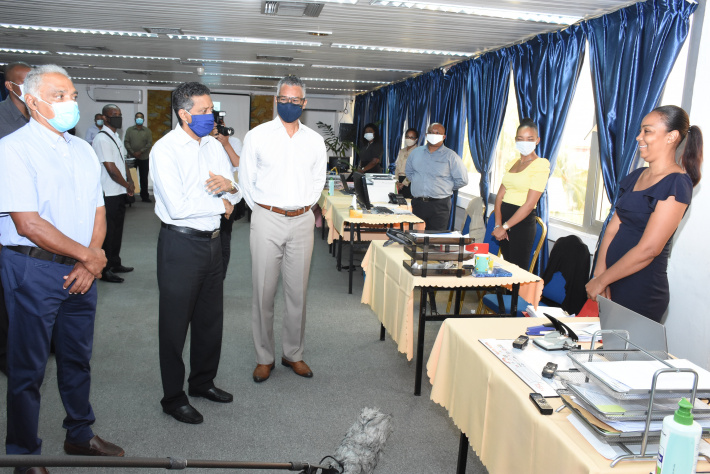 President Danny Faure has said that he is very proud that Seychelles has been able to put in action the Seychelles Employment Transition Scheme (Sets) to assist workers made redundant through guaranteeing placement in another employment including retention of their previous salaries, in the wake of the coronavirus(Covid-19) pandemic.

President Faure said this yesterday while addressing Sets’ temporary working team during a visit to its headquarters, Room 1, second floor, International Conference Centre, to see its operation, progression and the team in action.

“I am very proud that we have Sets here as compared to other countries with no such structures to support their many workers losing their jobs,” he said, noting that Sets is doing an extraordinary work in this area.

President Faure thanked the working team for their hard work he said is helping to contain negative economic impacts on families, something that he wanted to avoid and what prompted him in March 2020 amid the pandemic to initiate such an employment safety net mechanism with stakeholders.

“I am very encouraged to see you all coming to give a helping hand to Sets and on behalf of the government I would like to thank you all and I count on you for us to continue with the work together,” President Faure added, noting that 16,000 Seychellois workers are being assisted financially by government.

Earlier, after being met by the head of Sets, Guy Morel, and chairman Aubrey Lucas, President Faure was guided on a tour of the office where he was introduced to the working staff. Ex-Banyan Tree hotel workers Merna Clothilde and Medna Latulipe had the opportunity to share with President Faure their work experiences with Sets since being employed in July 2020 after being made redundant.

President Faure was also introduced to a newly created database that covers clients looking for work and companies looking for clients. The database, developed in two weeks, also covers clients registered under the different employment schemes with the Ministry of Employment, Immigration and Civil Status.

Speaking to the press, Mr Morel said that Sets is trying to break the self-barrier imposed limitation by workers with regard to taking decisions to move forward “and this is why our tagline for Sets is ‘going beyond the frontier of imposed limitations’”, he said.

Many of the twenty or so office workers, including the two working on Praslin and the one on La Digue, are workers that have been made redundant and of whom some will take up re-skilling courses for permanent job placement in other areas. Some are also planning to venture into their own business after taking up re-skilling courses.

Mr Morel said that 500 clients have registered with Sets since its inception and around 70 clients have so far been placed on permanent full time jobs replacements.

He said that Sets is putting a lot of emphasis on clients gaining the technical and attitude competencies, crucially important for job sustainability.

He claimed that there is work for all Seychellois in the country given the fact that we have to train them to slowly replace some of the workers out of the 16,000 foreign workers still in the country and from the 5,000 who are out of the country as a result of the new Gainful Occupation Permit (GOP) restriction.

As Sets’ programme is expected to end in December 2020, Mr Morel said that the government is looking at various options as to what will become of Sets beyond December.