The US’ line-up for the October National Assembly election, with party president Vincent Meriton addressing the gathering (Photo: Joena Meme)

US presents its 26 candidates

United Seychelles (US) on Saturday endorsed the nomination of its 26 candidates for the National Assembly election, scheduled to take place from October 22-24.

This was during an extraordinary congress held at the International Conference Centre of Seychelles (ICCS).

Present at the ceremony were the US’ executive committee members – including party president Vincent Meriton and deputy president Macsuzy Mondon – nominated candidates for President and Vice-President Danny Faure and Maurice Loustau-Lalanne as well as supporters and activists.

Additionally, two veterans of the party have made their comeback – Ivy Edmond (Plaisance) who was a former member of the National Assembly (MNA) and France Bonte (Grand Anse Mahé), who has served on the party’s central committee.

Their nomination were validated and approved by acclamation from the party members present.

All 26 MNA hopefuls were given about one minute each to address the crowd, as well as those watching via the live stream, and express their vision for their respective districts and for Seychelles.

US is campaigning to gain back control of the National Assembly which it lost in the 2016 legislative election when opposition coalition Linyon Demokratik Seselwa (LDS) won majority seats.

The party’s platform for this upcoming general election is a call for national unity, reflected by its slogan ‘Koste Pour Sesel’.

In his address for the occasion, the US presidential candidate noted that the 26-member team for the legislative election has been chosen to go out into the district to explain the precarious situation Seychelles is facing due to Covid-19.

Mr Faure again stressed that a government of national unity is the best solution during this unprecedented crisis, noting that partisan politics which divides the country will not achieve positive results.

“We have a strong team which is offering the Seychellois people diverse professional and academic knowledge as well as rich life experience,” added Mr Faure.

“The team comprises youths with effervescence and veterans with much knowledge and experience which Seychelles requires today.”

“I know that this team will inspire the Seychellois people, and give them the support and hope that they need in this difficult moment our country is going through. I know that they will explain to the people the true realities in our country, the enemy we are facing and the solutions ahead,” said Mr Faure while adding that the country should not fall to extremist and divide-and-conquer type of politics.

He also called on his MNAs to campaign respectfully and bring the languages of compassion, love, peace and solidarity to Seychellois.

The endorsement of the US candidates comes a week after LDS presented its 26 candidates for the legislative Seychelles.

One Seychelles, another political party set to participate in the general election, has been gradually revealing its legislative candidates by region.

The Electoral Commission has set the nomination dates for September 16 & 18, 2020 for Presidential and National Assembly candidates respectively. 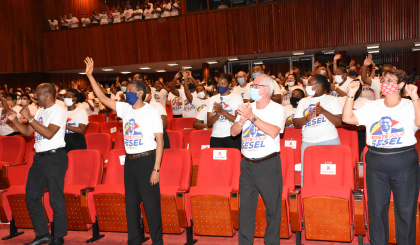 The gathering showing their support to the 26 candidates (Photo: Joena Meme)