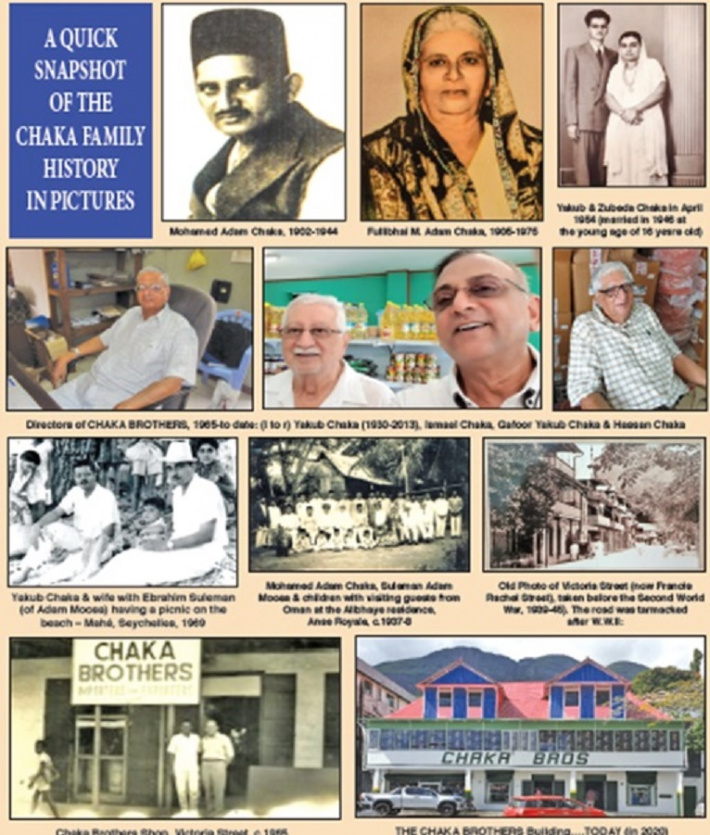 Considered as one of Victoria’s landmark, ‘La Maison Chaka’ or the Chaka building marks its 100th anniversary this year. Sometime ago, the Seychelles Heritage Foundation put up a ‘1920’ plaque on the front wall of the Chaka shop to recognise the traditional style building as a cultural heritage site.

In 1969 the smallest capital in the world, Victoria, was very different from what it is now – the expanse from the Stad Popiler to the New Port did not exist and the late afternoons after work were not marked with heavy road traffic.

Abdul-Gafoor Yakub, who was only 10 years old in 1969, reminisces on growing up in the centre of town at the iconic Chaka building and he notes the changes he has observed over the years, both pre- and post-independence.

“The Chaka building was built in 1920, and my grandfather was instrumental in purchasing it and putting it under the name of Adam Moosa, one of the biggest merchants in Victoria at the time. Because my grandfather worked with Adam Moosa (c.1878-1928)and had a 25% shareholding in the business, I think my grandfather owned this building as part of his share. And over the years he literally brought up his entire family of 10 children in that building.”

“The Chaka building is located on Francis Rachel Street, which was then called Victoria Street that leads to the Clock Tower and then from the Clock Tower there was a narrow seafront street that led straight to the old port harbour where the ships would berth. On the other side of Victoria Street there was an esplanade where Nouvobanq & Sacos are currently located. From there it was full of greenery, hedges and majestic sandragon trees providing shade to the passers-by. While one side of L’Esplanade bordered onto the Victoria Street, the other side of the walkway bordered onto the open sea i.e. the Indian Ocean. From the edge of the sea front, there were some old steps leading up to the esplanade area. As a youngster, I remember the smaller outboard boats from Ste Anne, Round, Moyenne and Cerf islands would come and berth near there to buy their provisions from Chaka Brothers, Adam Moosa, Temooljee, Jivan and so on,” Mr Yakub recounts.

“The main road was Victoria Street and this led to another main road, Albert Street. Albert Street is one of the very few streets that never changed its name after the coup d’etat. However, the people need to know it was actually named after Prince Albert, not after our former President Albert Rene.”

From the year 1900 up to the mid-1970s, Victoria Street found itself as the commercial centre of town since most people procured their groceries and got their repairs done from the variety of retail and repair workshops located in the capital, Victoria. Seychelles’ top exports – cup copra, cinnamon bark, patchouli, vanilla, and guano – were also purchased and delivered there by the landowners and occasionally some were stored at a large warehouse located at the old Victoria Port jetty for subsequent fumigation, loading and shipment to Europe and Asia. Victoria Street itself was initially a rough road; it was not tarmacked until after the Second World War, 1939-1945.

The Chaka family were not the only immigrants of Indian origin from Gujarat who focussed on trade and commerce and who built their homes and businesses on Victoria Street. The Adam Moosa family, Hassanali & Umarjis, Udwadias, Khambattas, Dhanjees, Oliajis, Pardiwallas, and Jivans all owned properties along Victoria Street, from Le Chantier down to the Clock Tower. There was a good mix of Hindu, Muslim and Parsee (Zorastrian) families that settled there and they mixed very well with their Christian neighbours.

It’s interesting that the modest but well-known Alibhaye family who arrived in 1890 from another part of Gujarat in India somehow chose to settle at Anse Royale where they still operate a retail shop and own a few fishing boats as they have always been keen fishermen, integrating well with the locals. Like the Chakas, many of these families arrived in Seychelles from the late 1800s to early 1900s in search of a better life as well as adventure. In those days in India, then a British colony, there were newspaper adverts published by the British India (B.I.) Steam Navigation company enticing people to “Visit exotic Seychelles by B.I. with a monthly sailing from Bombay and Durban”.

Gafoor Yakub’s grandfather, Mohamed Adam Chaka, first set foot in Seychelles in 1918 just after the First World War at the tender age of 16, accompanied by his equally young wife Fullibhai – Seychelles was a place he would call home until his death on February 14, 1944. The couple had 10 children – 5 sons and 5 daughters – the first generation of Chakas, born and bred in Seychelles.

“My grandparents got married very young in the village of Valan, located in the district of Baroda, Gujarat. Getting married young was common practice at the time. Baroda was the second biggest city occupied by the British, second after Bombay (now renamed Mumbai). They emigrated from Bombay to Seychelles in 1918 by merchant ship belonging to the British India Steam Navigation Co. Ltd”, says Mr Yakub.

“My grandfather came to assist his maternal uncle, Adam Moosa, in running his vast business operations which ranged from import-export-wholesale-retail to supplying most of the inner and outer islands. I believe my grandfather developed a keen eye for investment in real estate and property development during his relatively short life span. He bought a lot of properties for the Adam Moosa company. He also was responsible for recruiting several staff on short-term contracts from his village in India as the company operations in Seychelles expanded in the 1930s, 1940s and beyond.”

“Chaka Brothers itself started operating in 1965, and it was my late father, Yakub Chaka, who founded it. He invited his four other brothers to join him while he ensured that his 5 sisters each got married eventually and they all settled in different countries on the African continent.”

“When my grandfather passed away suddenly in 1944, my own father had to be removed from the Marist-run Catholic school at 14 years old as my grandmother, who had no knowledge of business, felt she could not afford the school fees. My father was sent abroad for a number of years for his academic studies. He then came back to work at Adam Moosa as a Clerk, and he subsequently got married to one of the daughters of Suleman Adam Moosa, the only son of Adam Moosa.”

“By the age of 35 my father wanted his independence; he opened a shop on the ground floor of the Chaka building while residing upstairs and the retail and wholesale business has been there since 1965. It’s now been in operation for 55 years and we are still doing business. Nothing has changed.”

Growing up in the centre of the bustle and activities of the capital city of Victoria must have been quite exciting – even if it wasn’t as chaotic as New York or as grand as Paris.

“There used to be the Seychelles Yacht Club constructed at the end of a separate narrow road leading up to a pier where mostly rich people and expatriates would meet for drinks and us kids used to often fish in the rivers flowing down to the esplanade and the open sea. We also fished along the narrow pier leading to the Yacht Club and the rivers leading down to the Esplanade, and we did catch some medium sized fish at the time. We also loved playing five-aside football barefoot whenever we got a chance. So, we had a bit of adventure in a place which is now all reclaimed land,” Yakub recalls.

“As kids growing up in Victoria, we were up to all sorts of mischief. We used to walk and run all the way up to leafy English River and Union Vale areas, all of which were considered as part of Victoria. I recall the Butler-Payette family resided somewhere up at Union Vale; I went to school with Gilles Butler-Payette, who is Mathilda Twomey’s brother; she was only one year younger than I. I recall David Andre’s dad was a prison officer at Union Vale at the time and David was a good friend and classmate of mine – In fact, I started playing guitar in my teens with David Andre and Joe Samy; those were fun and memorable times.”

“I also remember going up the Trois Frères mountain with my cousins and occasionally with a small group of friends on a Sunday morning for half a day; we would head off from 7 in the morning. We walked up to Bel Air via the La Poudrière road and then Sans Souci, and when we reached the top, we would wave down to our folks back home who had binoculars, and by noon we would come back in time for Sunday lunch. As with every Seychellois family, Sunday lunch was a big deal even though we are Muslims – this was because of our Creole heritage; almost every Sunday we had a big family get together and a chicken or meat dish was served, as opposed to mostly fish and vegetables being served during the week.”

But from the perspective of a man who spent the majority of his life there, how has Victoria changed since Independence?

According to Gafoor Yakub, Victoria was already evolving prior to the country’s independence in 1976.

“Before independence, the British Costain Group, followed by W & C French, undertook some major land reclamation projects in Victoria such as the Victoria Stadium, the Roundabout, etc [...] so there were some big changes being done to the physical landscape even before Mr Mancham got sworn in as President on June 29, 1976.”

“Nowadays, our dwelling houses and commercial buildings no longer look the same. In typical creole style, our kitchens and toilets were always separate from the main house but as we have evolved over time so have our houses,” says Mr Yakub.

“Right now, I feel our culture is waning. With the modern influences already inside our psyche, we have tended to borrow from other cultures over the years. But of course, culturally, we were bound to change because I suppose that, as a small island nation, we are like a sponge that naturally absorbs and welcomes ideas from abroad and often adopts lifestyles from abroad.”

Gafoor Yakub concludes by saying, “My personal wish or vision is to at least conserve the external colonial architecture of the Chaka building and I’d like to encourage others on the same side of the street to do likewise, so that the present and future generation of Seychellois and also our tourist visitors can cherish and appreciate that part of our local Creole heritage. Furthermore, we should make use of our unique culture to promote tourism, environmental protection and good, decent living values which are part and parcel of our cultural heritage.” 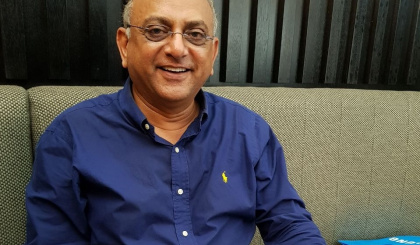 Gafoor Yakub being interviewed by Elsie Pointe of Seychelles NATION