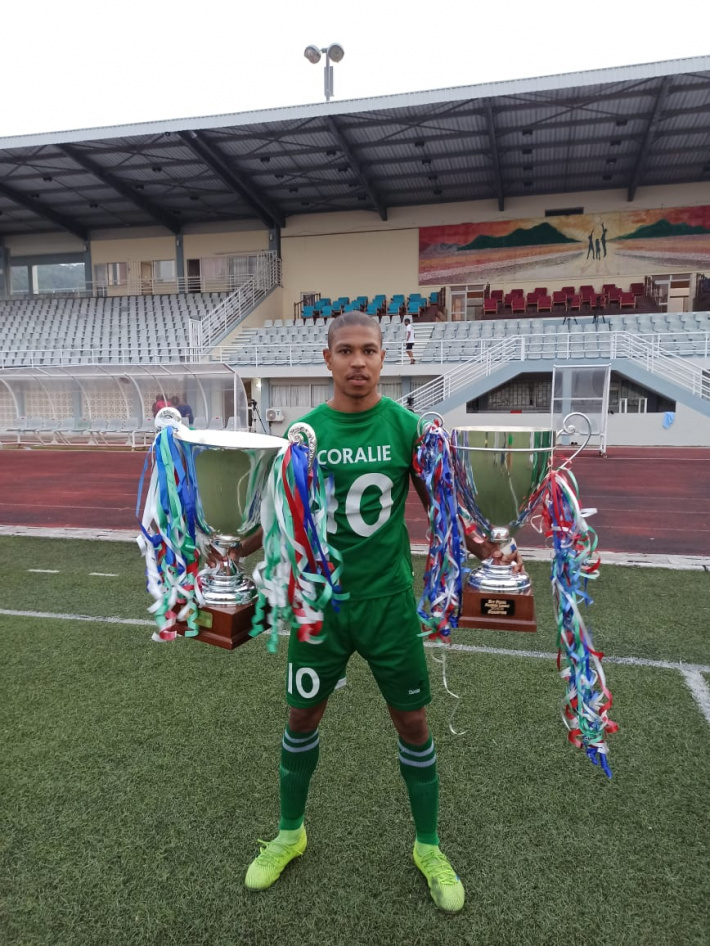 League and Cup double winners Foresters’ striker Leroy Corallie has said that he dreams of winning the best footballer award before hanging up his boots.

Speaking to Sports NATION after he finished the season as Foresters’ top scorer with 16 goals this season, Corallie explained that he feels that he deserves to win this top award in his illustrious career when he compares his success with other winners of this award in previous seasons.

“I honestly feel that I should have won this award especially based on the number of titles I have won with St Michel as well as individual awards where I have even been the best scorer at national level in 2012 with 18 goals,” reflected the diminutive striker who averaged 20 goals per season during his glorious time with St Michel where he even reached 25 goals in the 2016 season.

In fact, Corallie spent 10 and a half years with St Michel where he won a wide range of honours such as nine President’s Cups, seven league titles, five end-of-season knockout cups and six Airtel Cups before he decided to move to what he thought was to be greener pastures with Red Star Defence Forces in the 2019 season.

Corallie felt that by joining Red Star Defence Forces would help him rekindle his success but was left very disappointed when the army team lost both the league and Airtel Cup in a very star-studded team under the guidance of coach Harold Hoareau. He attributed the shortcomings to the problems between the team management and foreign players which undermined the team’s results on the pitch.

“After this setback, I made up my mind to follow coach Hoareau to Foresters but it was not that straightforward as it took almost eight months for Red Star Defence Forces to release me after a transfer fee was paid and in the meantime, this affected my chances of taking part in the Indian Ocean Islands Games (IOIG) in 2019 though I had initially been drafted in the squad and this was very frustrating times for me,” Corallie related to Sports NATION.

When he was finally allowed to link up with coach Hoareau at the Mont Fleuri-based club who had recruited eight players from Red Star Defence Forces along with top Nigerian striker Kazeem Adeyeri from St Louis, Corallie wasted no time showing his prowess in front of goal for his new team and this propelled Foresters among the top teams in the league but the Covid-19 break halted their good form.

“We were playing well before the halting of sports in March due to the coronavirus pandemic and we found it tough to get back to the same level, but overall we really deserve winning the league and for this I would like to give all credit to coach Hoareau who showed his knowledge of the game,” Corallie stated.

Corallie even went on to further praise his coach whom he says has got very good principles and has no preference, but treats all the players equally even the foreign players. According to him, this has been the reason for his success.

“I rate coach Hoareau very highly as he is straight with all his players and has been able to bring the same level of discipline that I was used to at St Michel which I did not expect and this has enabled him to finally achieve success which he fully deserves,” Corallie claimed.

The 31-year-old forward added that it has been a very good season with Foresters for him personally as he has been able to prove his doubters wrong and is adamant that he will prolong his stay with the squad led by coach Hoareau next season.

“I think I did not let Foresters down for the fee they paid for my transfer though I have been bothered by recurring hamstring injuries where I have missed four matches this season though I feel I could have even scored more goals, but I still feel very satisfied as I managed to win the double again after reaching this milestone twice with St Michel and I hope we can continue our domination next season. But for the time being, I am convinced I am well placed to be considered for the best footballer title which is one of the rare honours which has eluded me up to now in my career along with representing my country at the Indian Ocean Islands Games even if I am the country’s top scorer at international level,” Corallie said in conclusion. 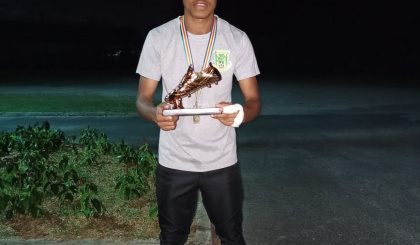 Striker Corallie with his top scorer award for Foresters