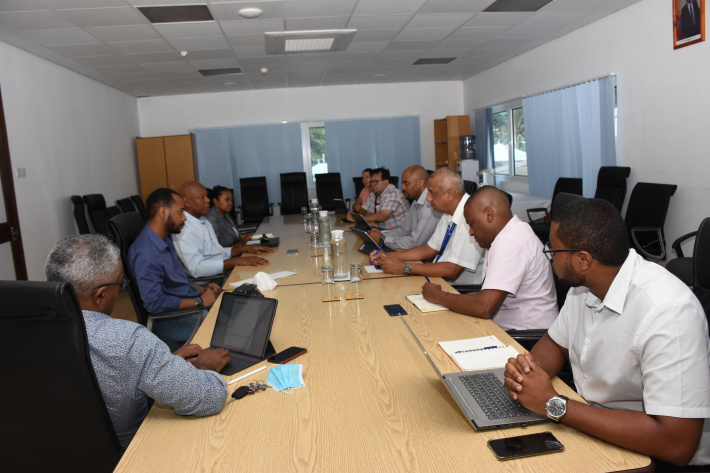 The meeting between representatives of SCAA and of Seychelles International Airways (Photo: Anel Robert)

Officials from the Seychelles Civil Aviation Authority (SCAA), led by its chief executive Gary Albert, yesterday morning met with Captain Robert Marie and his team from the Seychelles International Airways to discuss on the way forward following the intention of the private airline company to start its operation soon.

With no formal application request handed in by the company to SCAA so as to start its cargo and chartered flight business, the authority, as airline regulator in Seychelles, had wanted to know exactly what the private airline company wanted to do in terms of its operations.

According to Mr Albert, the consultation meeting with Seychelles International Airways has given SCAA a broader perspective on what the company wants to achieve further to its advice and guidance given on procedures in place to operate such a business.

He stated though that the company will need to make a formal request and this has to be approved for it to be able to operate.

“We were aware that the Seychelles International Airways had a project in the pipeline but to date we have not received any formal application or business plan,” Mr Albert explained after the meeting.

He noted that though SCAA has now a clearer picture of the company’s operations, the authority is waiting for a list of documents from the company for approval, with regard to the start of its business operation.

Mr Albert further noted that SCAA, regulated under the International Civil Aviation Oraganisation (ICAO) standard, has to certify that the aircraft to be used by the company is of high level with regard to security and safety standard.

He said that the company will need an Air Operator Certificate (AOC) from SCAA to be able to operate in any country if it acquires its own aircraft.

He noted that the AOC process is quite lengthy for a company with its own aircraft and in the event that the company decides to charter an aircraft from another AOC certified company, it will not need an AOC with SCAA as it will be using the AOC of the other operator.

In launching the company on August 21, 2020, Captain Marie had said that the company, which will be focusing more on cargo transportation, intended to operate its first flight on September 10, 2020 with a chartered Airbus A340-600 belonging to a foreign company. In that case, Mr Albert stated that it might be possible for Seychelles International Airways to operate its first flight but it will depend also on how long it takes to hand in its business plan to the authority for approval.

“We, as the facilitator, are ready to give the company our full support so as to help it materialise its project,” Mr Albert said, noting that the authority has and will continue to facilitate and guide any stakeholders wishing to do business at the Seychelles International Airport.

He stated that SCAA is planning to extend the airport in the future to cater for more planes, coming and parking.

Captain Marie was not available for comments after the meeting as he had to attend to an urgent matter.

Also present at the meeting was the principal secretary for Aviation, Port and Marine, Allen Renaud.