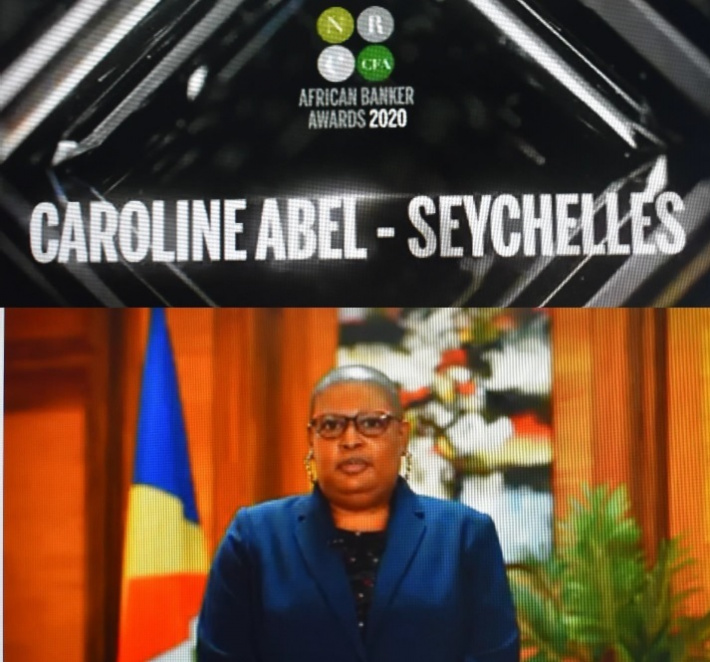 Central Bank of Seychelles Governor, Caroline Abel, is one of the winners of the African Banker Awards 2020, announced during a virtual ceremony held late yesterday afternoon.

Governor Abel has been named this year’s Central Bank Governor of the Year by the African Banker Awards Committee.

The Awards are considered the Oscars of the African banking community and given the impartial selection and judging process are the most respected in the field.

When announcing the award, the presenter highlighted the following: “The Central Bank has been exemplary in its work be it on transparency, guidance to markets, in terms of its response to the current epidemic, in terms of playing its supervisory role for the banking sector and supporting digitisation of banking and finance and also in terms of working alongside other institutions to provide stability and a supporting local economy. The bank is playing a major role in supporting the local economy, which has suffered greatly from Covid-19, supporting the banking sector and injecting liquidity into the market, acting in unison with the different ministries to provide shock absorbers to the local economy, and acting in a manner that was timely and exemplary. Seychelles is really a model student in Africa and beyond. And our Central Bank Governor this year, Caroline Abel, is more than deserving of this award.”

In accepting the award, Ms Abel said she felt humbled and deeply honoured to receive such a recognition.

She noted that it does not only highlight the achievements of her role as governor but also shines a spotlight on the work of the Central Bank of Seychelles (CBS), which like other central banks has had to adapt to several challenges over the years, including the current Covid-19 pandemic.

“The work is not done by the governor alone, but by a team of capable and dedicated individuals. Therefore, I would like to dedicate this award to the entire team at the bank, who has been working tirelessly and making sacrifices to respond to the exigencies of the current crisis. Let this award encourage and inspire us all to continue working hard and uphold our credibility as we steer our economy through the storms,” Governor Abel added, also thanking her family for their support.

Awards are presented in various categories, which the organisers say are aimed at honouring the achievements of individuals and institutions who have contributed significantly to the reform, modernisation and expansion of the banking and financial sector across the African continent.

African Bank of the Year: Trade and Development Bank (TDB)

Investment Bank of the Year: Citi

SME Bank of the Year: Bank of Industry, Nigeria

Infrastructure Deal of the Year: Port of Maputo - Standard Bank

Press release from the Central Bank of Seychelles