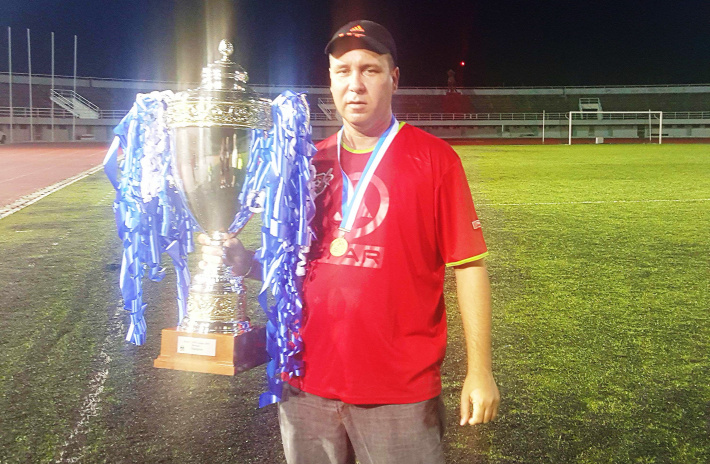 Delpeche with one of the cups won by St Michel

Michael Delpeche has stepped aside as Premier League side St Michel’s club secretary for the coming season.

Speaking to Sports NATION, Delpeche said it has been a difficult decision to quit the post that he has served so tirelessly for the last eight years with so much success and silverware.
“I feel I need a new challenge after winning everything at domestic level with St Michel for almost a decade and I want to embark on a new venture to help my country as national team manager,” explained Delpeche.

The Liverpool fan joined St Michel in 2013 after he left St Roch after beginning his career in management in 2002 with Dolphins FC. He was encouraged by current St Michel head coach Nigel Moustache to join St Roch to help coach Gerald Gonthier with the club who even rubbed shoulders with the best in the then first division.

After proving himself in this role, he was lured to St Michel where he was appointed as club secretary while his good friend and mentor Ralph Jean-Louis was coach to begin his glorious years of cup glory.

“It has been a memorable experience with some very emotional moments especially when winning title for the first time which showed that all the hard work has paid off in the end as this daily running of a club is quite demanding where one has to take care of every detail from training to match day and even about transfers as well as medical issues of the players. In fact, as club secretary I had to do everything to ensure that all is in place to ensure the team’s welfare is well looked after so that they are happy and ready for matches,” revealed the St Michel management member.

Delpeche says that the experience with St Michel will live with him throughout his lifetime as it has been very enriching to him personally since it had always been his wish to work closely with a club and enjoy such success.
“I boast two league titles medals, four Airtel Cups and seven President’s Cup triumphs including five in a row which amounts to 13 major titles in the eight years at this eastern Mahé club where the best moment was our league and cup double triumph in 2014. I think we were well placed to win a treble this season as we had already secured the Airtel Cup and were in a strong position in the league but personally I have no regrets for pulling out of all competitions after the coronavirus break. Nonetheless, this glorious record speaks for itself and is the reason why I have been chosen as national team manager for the second time,” claims Delpeche.

The national team job is now the main reason Delpeche has moved away from St Michel as he has set his sights on more success at a higher level as he related to Sports NATION.

“I want to concentrate all my energy with the national team as we prepare for the next Indian Ocean Islands Games as I would dearly love to win the gold medal at the next regional games in 2023 which I think is possible. So this job will incur a lot of responsibility especially in this post Covid-19 era and therefore I want to focus on this task ahead and though I don’t rule out the possibility of returning to St Michel in three years’ time after the Games but after that, I will also aim to be elected on the Seychelles Football Federation executive committee and why not as chairman,” claims Delpeche.

In his illustrious career, Delpeche says that despite the hard work involved, he was full of praise for some players whom he considers as exemplary in their behaviour and attitude such as Alex Nibourette, Nigel Hoareau and Karl Hall and adds that Malagasies Jocelyn Fenosoa and Hassan Aly are two of the best players he has managed.

“There are a number of people who have been influential in my career as a member of a club management such as Ralph Jean-Louis, Brian Uranie, Andrew Jean-Louis not forgetting my family and the Almighty God as well even frequently sharing views with sports journalists has broaden my knowledge and helped me to deliver in my role as well as contribute to my achievements in our national game up to this point. I’m grateful to all of them as I now venture into new territory at international level,” remarked 48-year-old Delpeche who has devoted eighteen years to football management.