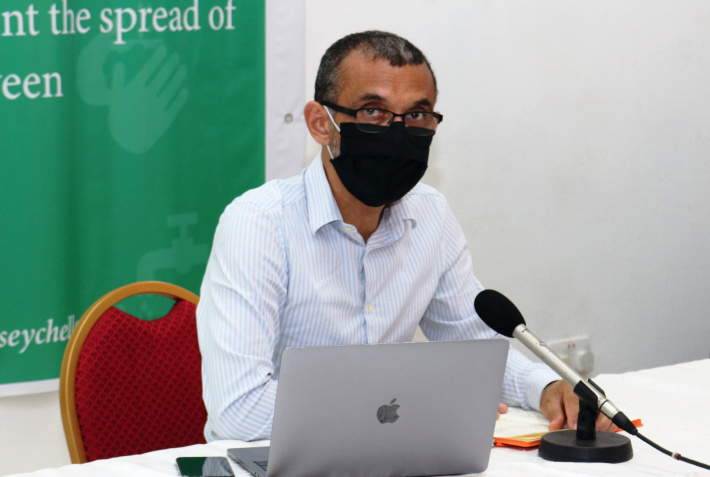 One patient under observation for possible infection

No new positive cases of Covid-19 have been recorded in the past week besides the nine mariners who were currently in quarantine on their ship. However, one patient is being monitored at the isolation centre.

In yesterday’s press conference, the chief executive of the Health Care Agency (HCA), Dr Danny Louange, noted that there are 72 people in quarantine at the Berjaya Beau Vallon Bay hotel.

“Most of the people in quarantine come from countries who are high risk so they were placed in quarantine as soon as they arrived in the country,” said the doctor.

He added currently there are three patients in isolation, two of whom are being treated for symptoms unrelated to Covid-19.

Dr Louange noted that the reason they are at the isolation centre at Perseverance is that they are still at risk of developing the virus as they recently got in the country so treating them in the Mont Fleuri hospital was out of the question.

The third person in isolation is currently undergoing some tests as he is developing symptoms associated with Covid-19 but it has not been confirmed yet.

The doctor also has shot down claims that infrared thermometers used to measure temperatures, widely used since the outbreak of Covid-19, are capable of emitting harmful radiation.

He said the department is concerned about the claims on social media and noted that the laser used in the thermometer emits energy even lower than infrared from sunlight.

Doctor Louange also touched on the services being offered by the clinics and hospitals, noting that emergency surgeries are still being conducted.

“At this moment cancer patients and people suffering from a condition are priorities. We have cleared many cases which were on the waiting list even those at specialised clinics,” he said.

He added that clinics are now more strict when it comes to appointments and noted that patients should respect the time given on their appointment.

Even though it’s been a couple of months, triage is still proving to be a challenge for people visiting hospitals and clinics. Dr Louange noted that he understands the process is sometimes slow but it is important that people respect it as the airport is opened and we can’t ever be too careful.

He added that the ministry is trying to speed up the process by digitalising the service.

He also touched on the opening of more testing stations and how it has improved in the last few months.