‘I have proved myself at all levels’

League and cup double winners with Foresters, head coach Harold Hoareau has said he now has won all the honours at all levels of local football after his latest success in the top flight.

It is a far cry for this coach who was not known only three years back but now has become a household name as he led his latest club Foresters to the league and cup double in the SeyPearl Premier League to be the kings of our national game.

“Coaching has always been my passion though I have always kept a low profile but worked hard to reach the top after I was given the opportunity to start as a trainer in 2005 with The Lions Youth team and I have never looked back ever since,” revealed the Foresters coach to Sports NATION.

After a short and uneventful career as a midfielder with Falcons and later with St Francis before ending up at top local club during these days with first division outfit Red Star under the guidance of Malagasy coach Mosa, Hoareau decided to move into coaching at the age of 31 and has enjoyed quite a silverware laden period up to date.

“I spent about seven years with The Lions Youth under 18 and under 20 where we won the league and even the knockout cup before I joined SPDF as coach in 2013,” explained the Cascade resident whose side just missed out on promotion to the second division as they lost in the playoff.

The following season the army team managed to win the championship to be promoted to the second division and it was in 2015 that he also took over as Red Star head coach in the third division and achieved a remarkable feat in 2016 as he guided both his teams to promotion though he admitted it required a lot of effort and commitment.

“It was not easy to take care of two teams as I trained the army team in the morning and then went to work on my farm at Val d’Andorre and then in the afternoon, I took charge of training of Red Star which demanded a lot of sacrifice and it is not everyone who would get involved to such limit unless you love the game,” claimed coach Hoareau.

In 2017, coach Hoareau decided to merge the two teams so that he could have a wide pool of local players and he went on a personal crusade to fulfill his ambition and even negotiated with the then late Seychelles Football Federation (SFF) secretary general Jemmy Adela.

“I discussed this possibility with the SPDF manager Philip Barbé who was the only one who took interest with the team at that time and he was very much in favour as well as the Red Star management who supported my idea and as the federation found no regulation breach, we were able to join our forces,” coach Hoareau said.

However, coach Hoareau found the going tough in their debut in the top flight with their all-Seychellois squad as they struggled in the first round accumulating only four points after the first round and he had to beef up his team to avoid the drop.

“I discussed the situation with my mentor and brother Achille (Hoareau) who agreed to support me in recruiting some foreign players, namely Malagasy Jocelyn as well as Kenner Nourrice and we went on to have a very good second round with only one loss and finished the season with 24 points to secure our first division status,” reflected coach Hoareau.

After having tasted first division football, coach Hoareau went on a heavy recruitment spree with the backing of his technical advisor Achille Hoareau as they brought top quality players such as Malagasy Jean Tigana, Darrel Damou and Rashim Padayachy to name a few.

“For my second season among the big boys, I targeted to win at least one trophy so my brother helped to make the transfers possible as we assembled a very solid team who were on the brink of winning the Airtel Cup as we led 1-0 at half-time against LightStars but lost concentration to concede and lose the cup. But the biggest disappointment was the manner we surrendered the league title on the last day of the season as the team were divided by too much interference by people close to the team management who wanted to dictate in team selection as they wanted to take glory for our success. However, this attempt backfired as it affected the morale and togetherness of the team and we played this decisive match against LightStars without any determination and hunger while our opponents were all hyped up to stop us to hand the title to their neighbours Côte d’Or which they did with victory whereas we only needed a point to secure the league crown but failed and this was a major disappointment,” claimed coach Hoareau.

Coach Hoareau then walked away from this merged team which he had been inspirational in its formation and went in search of another club to achieve his target and sounded out The Lions but it was not ideal as they had been relegated and the players who had followed him out of the door at the army team were not ready to drop to a lower division.

“We also approached Northern Dynamo but the problem there was that the management wanted to retain control of the club so we moved to Foresters who were on the brink of closure with no sponsorship and it was a good agreement to all parties and we also went for a prolific striker in the shape of Kazeem Adeyeri who had proved his worth with St Louis and could guarantee us goals.”

“I brought eight players from my previous team along with Kazeem as well as some of the Foresters players who had stayed and it was a very strong and well balanced team where we showed our intention in the league where we were well placed to take leadership before the Covid-19 break,” remarked coach Hoareau.

Despite five teams dropping out when football resumed, coach Hoareau admitted that his team made a slow start with only one point in two home matches but then LightStars returned the favour to this amiable trainer to help them win the coveted league crown.

“Our priority was to win the league and though we struggled a bit overall we deserved to be champions which brought me so much joy and a sense of fulfillment,” coach Hoareau said.

Boosted by their league success, this inspired them to go for the double with La Passe and Côte d’Or in their way of such accomplishment.

“When I think back, though we lost to La Passe in the league, I am adamant the result does not reflect the match as it was a match we could have won, so we were confident in the SFF Cup semifinal and we put on a very good performance, and in the final we were also confident and we again raised our game when it mattered to claim the league and cup double to complete my collection of honours in local football,” boasts the Foresters coach.

When asked about the main factor that has helped him achieve so much success in his coaching career, coach Hoareau was very forthcoming.

“I am a modern coach who believes in varying my style of play based on situations that present themselves in the match and ready to adapt to circumstance and most of all, I lay a lot of emphasis on discipline and training hard while treating all my players equally. I also think my forte is my tactical awareness and my team is well prepared as I study the opponents and prepare accordingly,” revealed the Forester trainer who says he has also benefited in his tutelage working alongside many coaches such as Mosa, Jeris Cesar, Gavin Jeanne, Marc Mathiot, and Jean-Marc Benstrong.

“I live and breathe football as I spend a lot of my time watching international football and learn a lot which helps in my knowledge of the game,” stated Hoareau who holds a Licence C coaching badge but says that badges do not guarantee success but what one does on the training ground which influence results.

The Foresters coach says that his target for the coming season is to at least retain the two cups they won this season and also attempt to add the President’s Cup and Airtel Cup to his collection of honours.

“I want to aim for more silverware as I did it this year with one of the youngest group of players and also plan to add two to three players to the squad in case we don’t lose any in the transfer. But apart from that, I don’t want to look much further as in this sport one cannot foresee the future as one is as good as one’s last result but I will take whatever challenge comes my way,” Hoareau told Sports NATION.

The modest coach also had words of gratitude for his two assistants, namely Dave Fred and Charles Andriamaro (Taly) as well as his players who have shown great faith in him and have reaped the reward with the double cup triumph.

“Nonetheless, I would like to say a special thank you to my brother and biggest supporter who has stood by me for all these years and has always shown confidence in my ability and he has been the main man behind my success and now we can cherish our achievements together,” coach Hoareau said in conclusion. 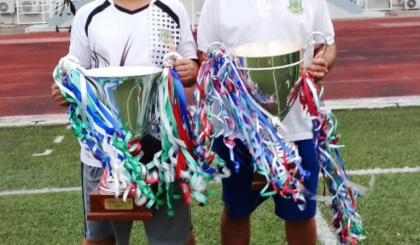