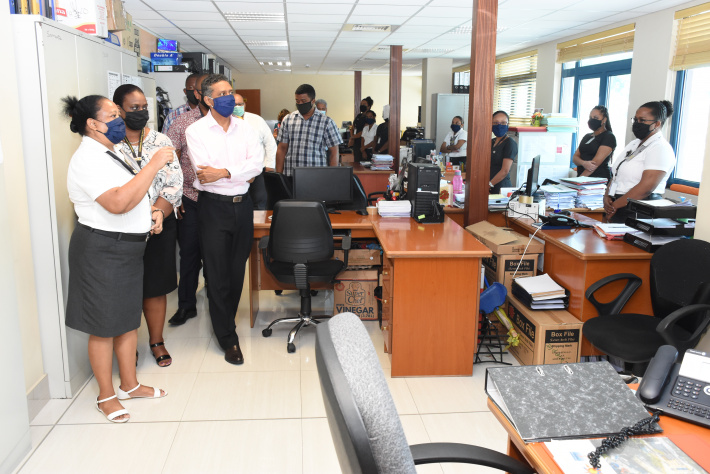 President Danny Faure yesterday continued with his series of official visit to government institutions with a tour of the Seychelles Revenue Commission headquarters at the Maison Collet.

The president was met and greeted on arrival by the chairman of the Seychelles Revenue Commission (SRC) board Chrystold Chetty, SRC’s commissioner general Veronique Herminie and deputy commissioner Fred Morel.

President Faure was offered a tour of the various sections at SRC’s headquarters, including the revenue, enforcement and audit sections, during which he was able to interact with the staff, took the time to understand the nature of operations, hear their contributions and brainstorm solutions.

His visit concluded with a meeting with the management of the SRC.

Addressing the management team, the president shared his appreciation for all the hard work and high level of professionalism displayed by SRC officials.

He urged them to continue upholding their high standards of professional conduct.

"I would like to thank everyone at the SRC for all your hard work. Despite the challenges that you face, you continue to serve your organisation and the country with integrity. Thank you for ensuring that we continue to collect revenue, particularly now with the economic crisis caused by the Covid-19 pandemic. We all need to brace ourselves for tough times ahead and I hope we can continue further improving SRC together," said President Faure.

Speaking to the media after the president’s visit, Mrs Herminie noted that yesterday’s visit provided the SRC with the opportunity to push forward some of its key concerns to the head of the executive.

“One of the issues we touched on was some of the exemptions or concessions that the government had offered in past negotiations and which are now causing some complications for SRC in terms of revenue collection. For instance, the double taxation agreements that Seychelles has signed with some countries ‒ there might have been a necessity for them at one time, but now as the world evolves and trade increases we have noticed a lot of investors from these countries coming to do business in Seychelles but Seychelles loses out on taxes,” Mrs Herminie explained.

Seychelles has signed double tax agreements with over 25 countries including Botswana, Mauritius, China, Malaysia, Cyprus and the United Arab Emirates. With such treaties, some offshore investors from these countries can be exempted from paying taxes in Seychelles as long as they have proof of tax payments in their country of residence.

SRC has been able to establish a robust taxation network with these countries to assess whether these legal persons are actually paying their dues.

The SRC management also talked to President Faure on its tax debts ‒ presently standing at R958 million ‒ particularly in regards to fast tracking a mechanism that would facilitate the write off for some of the irretrievable debts on its ledgers.

“There are some debts that we would never be able to recover such as in cases where people have passed away and there are no heirs to continue with the business. If we do not remove these from our books, these debts will never decrease. There are some work being done with the finance ministry and attorney general’s office to find a write-off procedure that will please all parties,” stated Mrs Herminie.

“Additionally, we discussed the issue where some of our staff have expressed the wish for SRC to regain the autonomy it had before. But these are all policy issues and the president noted that, with Covid-19, this is not the right moment for this to be addressed; this could come at a later stage under a well-organised structure.”

As the country’s tax, payments and customs authority, the SRC is the government’s financial heartbeat and the revenue it collects is crucial to the socio-economic wellbeing of its people.

During the lockdown period SRC was considered as an essential service and operated its customs and other vital sections at half capacity by employing a staggered hours system as well as alternating working days between employees. To note, SRC employs around 340 individuals in the various offices located on Mahé, Praslin and La Digue.

“We are the oil that keeps the government engine running so it was vital for us to keep operating in these times and we had to make certain arrangements with our staff to continue providing our services and collect revenue,” stated Mrs Herminie.

SRC recorded a significant decline in revenue collection during the lockdown period and Mrs Herminie highlighted that the SRC might not meet, never mind exceed, the R7.201 billion overall revenue collected in 2019.

While it collected some R589 million for January 2020 the figure gradually decreased to R359 million in April but, fortunately, revenue collection is picking up with R480 million collected in July and R507 million in August.

Statistics show that SRC has collected a total of R3.8 billion up to August 2020.

“There is no way we will be able to collect the same figures as last year. We have been lucky and we have four months left to go ‒ if we put the revenue average at R500 million per month maybe we can beat it but I strongly doubt it.”

The revenue collected by the SRC each year has a monumental impact on the country’s budget for the following year.

The accompanying photos taken by our photographer Louis Toussaint show President Faure on his tour of the SRC offices. 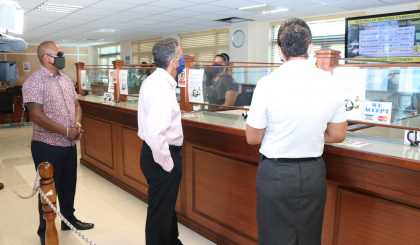 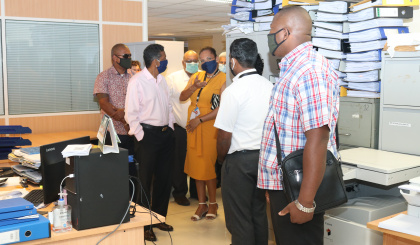