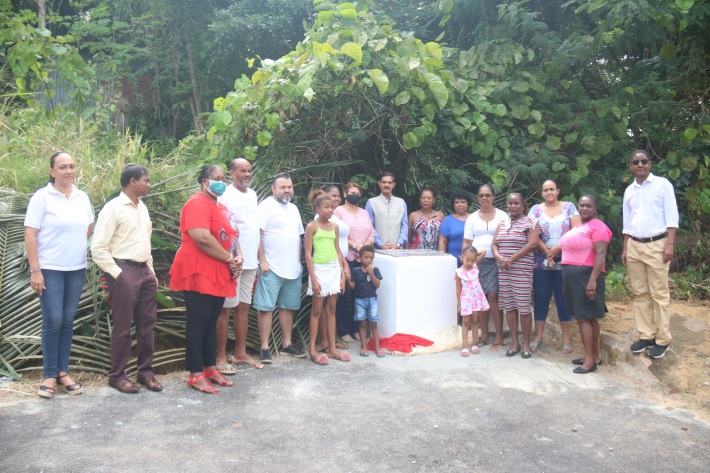 Souvenir photograph next to the commemorative plaque

Residents in the district of Baie Lazare have benefitted from an access and a feeder road, both motorable, in the sub-districts of Dame Le Roi and Anse Soleil.

The two projects have been executed under the High Impact Community Development Projects (HICDP) funded under the Indian government grant assistance and also with the assistance of the Seychelles government.

The Karoutsou road in the sub-district of Dame Le Roi and the Anse Soleil Bleu road at Anse Soleil were handed over to the inhabitants in two separate ceremonies held at both locations on Saturday morning.

It was the designated minister and the minister responsible for Local Government, Macsuzy Mondon, and the Indian high commissioner to Seychelles, General Dalbir Singh Suhag, who had the honor to unveil the commemoratives plaques in the presence of the principal secretary for Local Government, Marie-Celine Jeannevole and the Baie Lazare district administrator, Linette Dodin.

Also present were some of the residents and other representatives from the ministry, the Indian high commission and from the department of Foreign Affairs.

The Karoutsou Road, a 60-metre stretch of road going uphill, is benefitting around six families at the moment and also serves as an access to a land bank being developed in the area. Construction of the road started in October 2019 and completed in February 2020. Surfaced with bitumen, it was constructed by All Weather Builders at a cost of R684,665.

The Anse Soleil Bleu road is a 200-metre tar surfaced road that is benefiting the eight families in the area and also future housing projects. The road has cost R1.486 million and it was constructed by Mahé Design & Build and RJH Construction. It started off in October 2019 and was completed in June, 2020.

It is expected to be connected to the Anse aux Poules Bleues road in the future.

The two roads are part of the first phase of 33 projects at district level on Mahé, Praslin and La Digue funded under the R35 million grant by the Indian government with the assistance of the Seychelles government.

Addressing the gathering at the handover ceremony, HC Suhag said he was happy to dedicate the two projects, done by local building companies, as they shall not only generate more employment and business opportunities but also touch the lives of each and everyone in the community.

“The project will not only improve the transportation and circulation problem but also be a lifeline for the Baie Lazare community, providing them motorable access for the daily transportation especially of the school children and in case of emergencies,” HC Suhag said.

HC Suhag added that his country is deeply committed to cooperating with its maritime neighbour, Seychelles, and through its humble and noble initiative, it will work untiringly towards capacity building and development across all districts to therefore make a positive difference in the lives of Seychellois.

“This is the level of commitment and dedication the high commission of India devotes for the community level project assistance for its best maritime neighbour and friend, Seychelles,” he said.

HC Suhag claimed that the Indian government is already assisting Seychelles in constructing the government house secretariat building, a new police headquarters with forensic laboratory and a new Attorney General’s office, all put together costing more than R1.8 billion.

He noted that India will be constructing a state-of-the-art convention centre to be named after Matama Gandhi, besides the Magistrate’s Courthouse which is in final stage of completion.

For her part, district administrator Dodin thanked the Seychelles and Indian governments for the two roads. She also had special thanks to the residents of Anse Soleil who have given wayleave for the Anse Soleil Bleu road to be constructed.

On behalf of the residents, former district administrator, Mike Morel, also thanked the Seychelles and Indian governments for the two roads.

He said they will surely make a difference in the lives of the people who have for so long wished to have a proper access to their homes, adding that this will also enhance the value of those properties on which these roads pass.

During the ceremony at Anse Soleil Bleu road, guests were honoured by the residents with a token of appreciation, in the form of vegetable baskets, for their contributions towards the realisation of the two projects.

The Local Government was also very thankful to 63-year-old retiree, Alain Quatre, for his voluntary contribution to the construction of the Anse Soleil Bleu road. The resident had provided for free all the rocks on his property for the construction of retaining walls along the stretch of road. 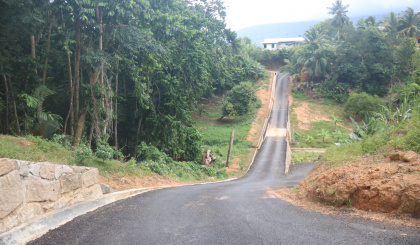 A view of the Anse Soleil Bleu road 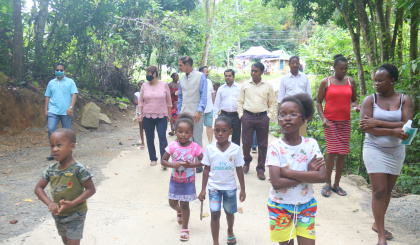