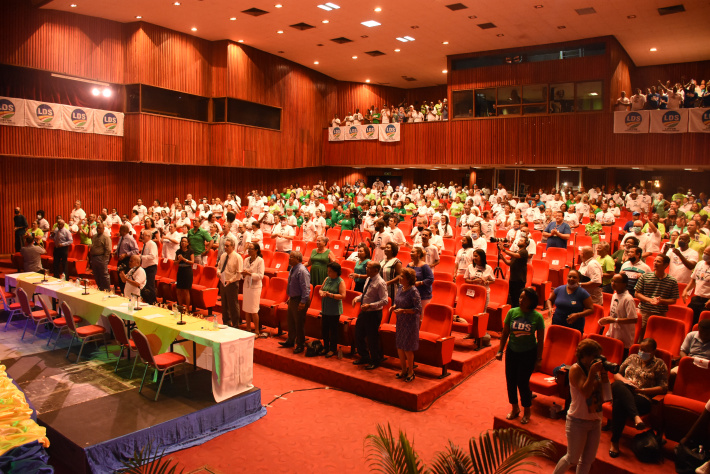 A partial view of the gathering at the convention (Photo: Jude Morel)

Linyon Demokratik Seselwa (LDS) held its annual convention on Saturday September 5, 2020 at the International Conference Centre Seychelles (ICCS) and which was also broadcast live on youtube.

Due to health regulations currently in place, attendance was limited and only by arrangement with district representatives.

The theme of the convention was ‘Transition to the new Seychelles’.

Roger Mancienne, the party leader, officially opened the convention and welcomed all the committee members. He further spoke about the LDS journey since its formation.

“When we came as an alliance, we were criticised, but today I am happy to say that we stayed together and came together as a determined team with a mission. We have been able to create a team spirit and furthering the wish of the people to see a proper democratic country.”

Roy Fonseca, treasurer of the LDS executive committee, presented the financial report for 2019 and after all expenses LDS has a reserve of R421,327.

Prism Associates was voted to be the auditor for the year 2020.

Simone De Comarmond, secretary general of LDS executive council, also addressed the forum and was quite emotional when talking about the journey of LDS so far.

“We have had a steady journey and we have done many activities with the help of the leader of the party and the staff. The members of the National Assembly also worked really hard to make it happen. We are currently in an intense period and my thought goes to the seven female members who are standing as parliamentary candidates for our party. My dream is that the new government will work to bring the gender balance in our system. Today let us take the resolution to change our mindset and train others to relieve us.”

She also talked about the presidential candidate Wavel Ramkalawan and his running mate Ahmed Afif. She further proposed a resolution to have the election of the executive council within the coming months as the party is participating in two major elections.

“Many times in the past the term ‘New Seychelles’ has been used, but we want to bring new hope and opportunities for all Seychellois. We want to do the transfer of power in a peaceful atmosphere and the work we are doing right now is historic,” said Mr Mancienne.

He talked about national unity which is a theme used by all parties, equal opportunities for all, a transparent government, justice and law and an efficient government.

LDS presidential candidate Wavel Ramkalawan concluded the convention by thanking all his supporters. “Our country is moving towards progress and we have hope that we will win the elections. LDS has a moral responsibility to win this election,” Mr Ramkalawan said.

He refuted claims going around and talked of having a government that rallies candidates from various groups and faiths.

“Let us keep working and prepare ourselves for this transition,” noted the LDS presidential candidate.

Other speakers during the convention were Naddy Zialor, Rosie Bistoquet who spoke about the public service, Anthony Derjacques who spoke about the revival of our economy and Ahmed Afif who spoke about transparency in the government and how politics should be removed from the civil service and new measures put in place to facilitate the work of the businessmen.

There were also some musical interludes in between the speeches.