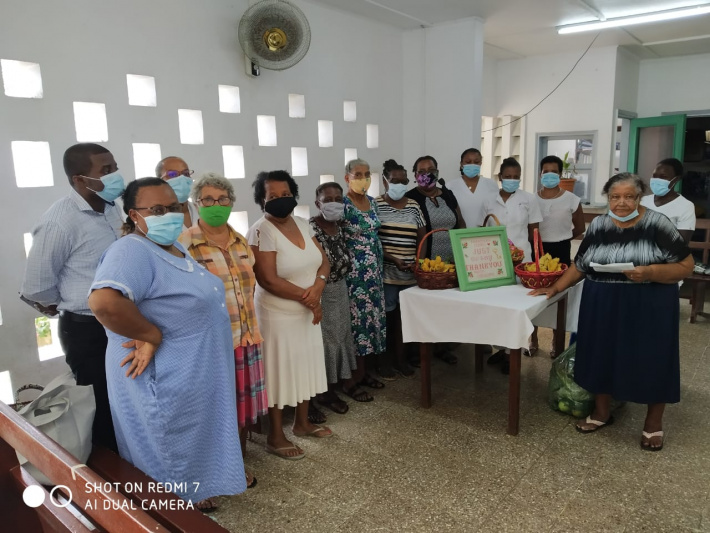 A souvenir photograph to mark the event

A group of elders from the Takamaka Senior Citizens Club last week made a donation to the district’s health centre.

In this period of Covid-19 pandemic, the health and social professionals who care for the needy are unfortunately sometimes forgotten or taken for granted. As the saying goes, the carers are not always cared for.

Fortunately, this is not always the case, as the group of all female seniors from Takamaka has shown.

The donation, which was presented by one of the Club’s members, Celine Hoareau, comprised fruits, vegetables and groceries destined for staff breakfast and gouté. It also included piece of stitch work – typical of Takamaka’s known traditional craftwork – saying “thank you”, which is to be added to the clinic’s décor.

Accepting the compassionate contribution on the part of her colleagues who included nurses, doctors, cleaners as well as nursing and pharmacy assistants, senior nursing officer Clarence Gill thanked the seniors for the kind gesture which she described as a surprise.

“This however shows that we are being closely followed by our clients. It will motivate us to be more committed and to work even harder in the future,” she added.

As for the Takamaka Senior Citizens Club chairperson Marie-Antoinette Savy, she said that it was necessary to display gratitude for the health workers’ devotion shown to the district’s population and for their extra effort during the Covid-19 pandemic.

“I would like to thank you for your devotion shown, and the extra effort given in your hard and risky work. You have your work at heart, and we also have been following you with our hearts. This modest donation is testimony of our support,” she said.

Promising to continue showing support to those who care for others in the community, she concluded by asking the nursing officer to convey the senior citizens’ gratitude to the health authorities for the good work done at national level.

She had words of compliment and gratitude addressed especially to the Public Health Commissioner and the Health Care Agency chief executive, respectively Doctors Jude Gedeon and Danny Louange, and their dedicated team of health professionals.

Rosita Hibonne, who was the first head nurse at the South Mahé district’s health centre at its opening which she reminded was on June 5, 1981, gave a historic of its operations since.

“It has been a long journey since the decentralisation of health services in Seychelles which started for us in a house belonging to the parish and which we turned into a makeshift clinic,” the now retired seasoned nurse remarked.

As for the men’s non participation in the event, Mrs Savy commented that some male seniors have also made their contribution though not been able to be present; the complementing masculine presence which she has promised for the club’s future activities. 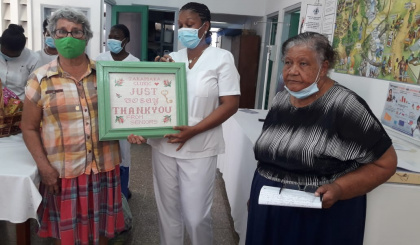