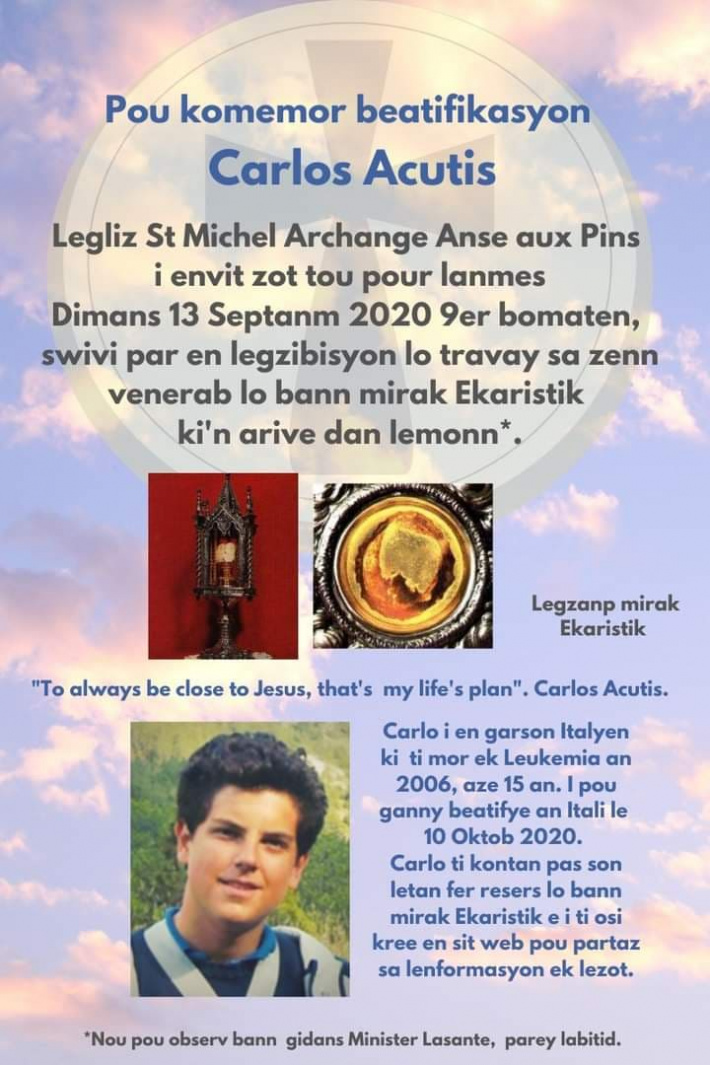 Carlo Acutis before departing for the Father’s Kingdom had researched, designed and put together an International Eucharistic Miracles exhibition.

When Father James Manjackel was here in Seychelles in January, he said there are 153 places in the world where Jesus had manifested to us in the Eucharist, that the consacreted host had turned into flesh and blood of Christ; to let us know that He is real and ever-present in the Consecrated Host. Young Carlo Acutis who will be beatified on October 10, 2020, before departing for the Father’s Kingdom at the age of 15, had researched and put together these Eucharistic Miracles in an exhibition which we would like to share with you, the people of Seychelles.

The Eucharistic Miracles exhibition will be opened on September 13, 2020 in the St Michael’s Church at Anse Aux Pins. We would like to commemorate Jesus who is really present in the Eucharist each time the host got consecrated and Carlo Acutis, the servant of God had dedicated time to search for these Eucharistic Miracles so that we may realise that we really receive the flesh and the blood of Jesus each time we receive the Sacrament of the Eucharist, it is called the transubstantiation.

Carlo Acutis was born on May 3, 1991 in London from Italian parents who were there on a business trip. He lived in Milan with his parents, was a wonderful boy who had loved Jesus dearly. When he was small, he wanted to go to church to say hello to Jesus. He did his First Holy Communion at the age seven years, since that day till his death at 15 year old he had attended the Holy Mass daily. He used to go to confession once a week and he was also fond of the Eucharistic Adoration where he would speak a tout par tout with Jesus. He would also recite the rosary daily. He said: “My life’s plan is to serve and be with Jesus and my highway to Heaven is the Eucharist.” Carlo had walked his talk!

He said: “Our destination must be what is infinite, not what is finite. Infinity is our homeland. We have been expected in Heaven since time immemorial.”

He also said: “All are born with their own originality, but many died as photocopies.” We can all be the disciple whom Jesus loves!

During his short life, from 1991-2006, he had done his best to fulfil God’s will!  We also repeat this often when we pray: Our Father, we say, THY WILL be done on Earth as it is in heaven. Are we doing the Father’s Will?

As mentioned, Carlo never missed a day of receiving Jesus during the Holy Mass and he had realised that some people are not taking the receiving of the Eucharist seriously, therefore as a computer savvy, he had done research on the Eucharistic Miracles all over the world. He had been to many of these places, personally, he had found about 140 of them and had documented them with photos and history of each of them in an exhibition, which is also virtual.

Carlo was a catechist at the age of 11 years old just after his Confirmation. The bishop of his diocese had reputed him worthy of teaching the Word of God at such a young age!  We would like to sensitise also our youth of this beautiful truth:

And as they were eating, he took bread, and after blessing it broke it and gave it to them, and said, “Take; this is my body.” And he took a cup, and when he had given thanks, he gave it to them, and they all drank of it. And he said to them, “This is my blood of the covenant, which is poured out for many” (Mark 14:22-24)

In the Gospel of St John, chapter 6, many things are explained as well.

Carlo got hit by leukemia at 15 years old in a space of a week he was gone, he predicted his own death two month before, he said that when he will weigh 70kg he will die. During his funeral, the church was packed, and there were as many people outside, with friends, homeless people whom he had provided for them, giving them food and sleeping bags together with his mum. Through his interception many miracles had happened and for his beatification he had cured a Brazilian boy who invoked him.

Our children doing their Confirmation this year, together with the Kids for Christ and Youth for Christ will be animated the Holy Mass on that day. It would be wonderful if many Christians especially the Confirmation’s children could see this Eucharistic Miracles exhibition!