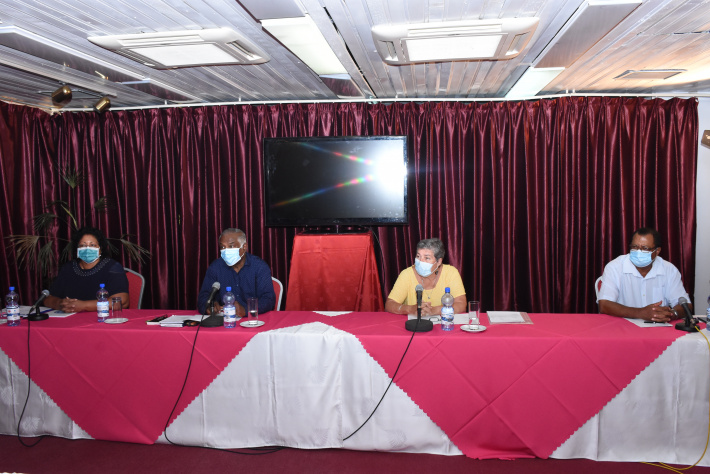 The response of public administrators is the most serious systematic failure observed by the Seychelles Human Rights Commission (SHRC) since its establishment in March 2019, according to chairperson Bernardin Renaud.

Judge Renaud, speaking at a press update held at ICCS yesterday afternoon, denounced some of the practices of public administrators who he says violate the fundamental human rights of citizens by not providing the expected level of service.

“Systemic failures are everywhere. It has become a norm in public administration that you administer how you used to administer. You used to

administer as you wished, it has become a norm, a government institution they receive a letter from a citizen, and no reply as if the citizen is a nobody. That is a serious failure.

“Individuals should be informed of the rationale behind decisions and the letter must include citations of the authority in law, or a quotation of the section of the law that imparts power to the said authority to take the decision, so if you do not agree, you can take it to court as it is your right to,” Mr Renaud said.

Having presented their first report to President Danny Faure and other relevant authorities, a recommendation to improve the quality of service given by public administrators will be in the second report, Mr Renaud added.

The commission, established in March 2019 under the Seychelles Human Rights Act 2018, is an independent body mandated to investigate human rights violation within the last five years and to make recommendations to the state, relevant ministries, departments and public administrators to address such violations and other weaknesses, termed as “systemic failures”.

As a new body, the commission is faced with the challenge of limited financial and human resources to handle the complaints within a specific timeframe. A portion of the commissionʼs budget, which is temporarily frozen by the Ministry of Finance, Trade, Investment and Economic Planning while some administrative processes are sorted has now been made accessible to the commission. Around R600,000 is being disbursed to the SHRC, for the second phase of recruitment of a further four to five employees to occupy posts including national and international senior officer and senior investigation officer, explained Vice-Chairman Michelle Lacoudraye-Harter. A framework detailing the timeframe by which complainants can expect a resolve are expected to be developed as the commission gets settled.

While it is mandated to assist in resolving human rights violations, it should not be mistaken for a complaint bureau, Mr Renaud said. Its primary concern is whether the state is fulfilling its functions and discharging its responsibility by implementing the correct procedures and processes aimed at protecting individualsʼ human rights. Despite its mandate extending over the past five years, the commission will consider on a case to case basis whether there is grounds for complaints spanning further back than 5 years, specifically if violations are still persisting and systemic failures still at play presently.

When a complaint is filed, the afflicted citizen lodges their statement which is then analysed and verified again with the complainant. A written summary is then communicated to the relevant department or state institution for a response. The commission is confident that authorities will be cooperative after it held meetings with the cabinet of ministers to brief ministers as to what the law stipulates and what is expected of the various ministries, and the other arms of government. Recommendations are also made through reports to the state and National Assembly, and the commission has powers to file a case at the Constitutional Court if necessary.