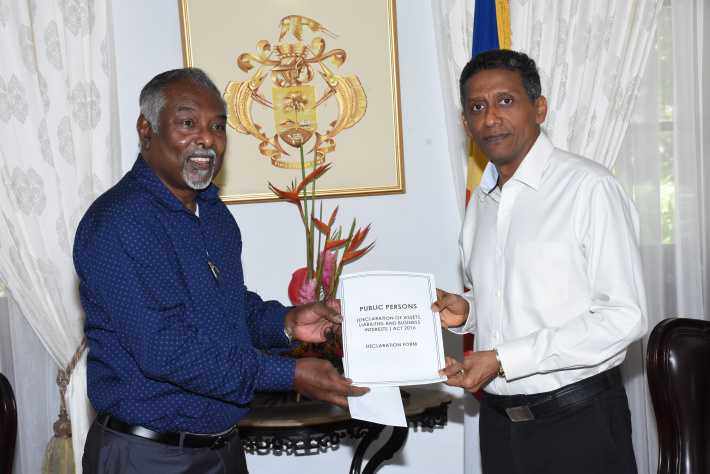 President Faure hands over his declaration form to Judge Renaud

The Public Persons Declaration of Assets Commissioner, Judge Bernardin Renaud, yesterday morning received President Danny Faure’s declaration of his assets. “President Faure informed me that he was ready with his form and I came to complete the procedure. Now everything is done and I have his declaration with me,” Judge Renaud said.

Talking about this institution, Judge Renaud noted that it is still in a transitional phase but at the same time, “we have to ensure that it works”.

“For the first time that we are asking people to come forward to declare publicly all their assets, I am quite impressed with the response. The form is not a simple one. In the history of Seychelles, it is the first time that a President declares his assets. We have to acknowledge all these developments,” Judge Renaud said.

Updating on the collection of forms from other public persons, Judge Renaud noted that “most of the former members of the National Assembly have declared their assets and waiting for the others to do so. They are liaising with me to sort out so that I can collect the forms from them”.

The Commissioner stressed on the fact that there are two groups. “The National Assembly members and those whose services have come to an end or due to resignation, are given one month to complete the form. In the case of the members of the National Assembly the date of submission expired on September 9. But for those who are still in office such as the president, the vice-president, designated minister and ministers, they have three months to do such an exercise. Those who are ready can call me and then I go collect the forms before the approved date which is on November 9.”

So far, Judge Renaud added, “nobody has come forward to ask to see the documents. Eventually all the documents are public but there is a procedure to follow in order to have access to them. Apart from this law, Seychelles has a Constitution which is supreme. As Commissioner I have to administer this law under the Constitution, that is why it requires a legal background to administer this law. It is said the document is public but not published!”

To recall, according to the Public Persons (Declaration of Assets, Liabilities and Business Interests) Act, 2016 in Section 7 (5), it states ‘Where a public person ceases to be a public person either by effluxion of time or by termination or on resignation, the Commissioner may order that a declaration be submitted within thirty days from the date of such effluxion of time of the term, termination or resignation, unless the declarations specified in subsections (1), and (3) (a) was filed within three months before the cessation date. As a result, in early August 2020, Commissioner Renaud requested in writing that all members of the National Assembly declare their assets publicly within the required timeframe as stipulated in the law.

For those who have already declared their assets, every January 30 they have to update their forms. But if someone comes in function for less than three months, the declaration of Assets will be done not the coming January but the next. If anybody does not comply to this law, as a Commissioner I will invite the person to explain why it was not possible.

“If after sometime the person ignores the law, then serious actions will be taken,” explained Judge Renaud.