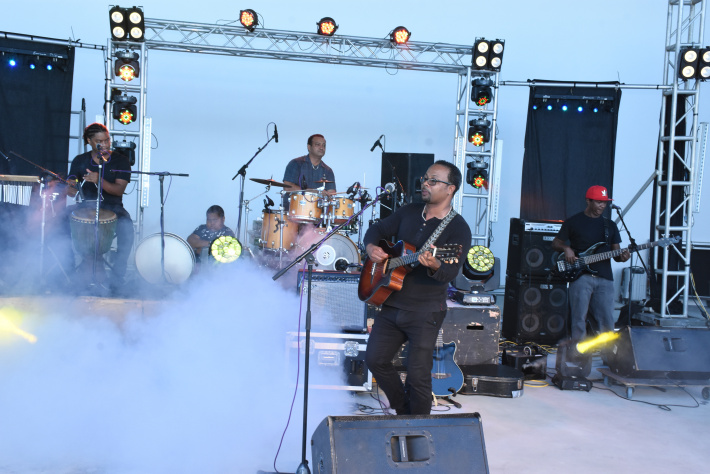 A group of musicians getting a feel of the new stadium (Photo: Louis Toussaint)

For more than 10 years, the Seychelles’ community of artists has been asking for a music stadium for expression of all forms of arts and after years of construction the chief executive of the Creative Industries and National Events Agency, Gallen Bresson, officially received the keys to the R22 million venue that has the capacity to accommodate 6,500 people.

General manager of Allied Builders, Hetal Shah, handed over the keys in a special ceremony held at the music stadium yesterday afternoon. It was attended by Designated Minister Macsuzy Mondon who also assumes the portfolio of culture, principal secretary for culture Cecile Kalebi, chairman of various artist associations, media houses and invited guests.

In an interview with the press, Mr Bresson noted that although construction has completed there are still some adjustments to be made to certain areas of the stadium.

“I will not be able to say when we will officially open the stadium for shows but now that Cinea has the key we will start managing the stadium,” said Mr Bresson.

The stadium itself has facilities to accommodate performers before and in between shows, these include bathroom equipped with showers, changing rooms, a designated smoking area and a large stage for their performances.

As for the public the facility has public toilets for males and females as well as ticket booths. Mr Bresson noted that new things will be added for the public in the coming months.

As the music theatre is close to residential zones, Mr Bresson noted that there will have to be communications between residents and Cinea. But he noted that the residents have welcomed the project so far.

Despite his minor criticisms, he expressed his gratitude for the stadium as artists now have a space of their own to put on shows.

The music stadium project was initiated by Alain St Ange who was assigned the portfolio of the Ministry of Tourism and Culture in 2012. He made it his mission to give the artists a music stadium, one which he said “they truly deserve” since the previous Stad Lanmizik had been converted into a Peace park.

Construction of the music stadium ‒ first conceptualised in 2014 during an exchange between the National Arts Council (NAC) and local artists ‒ initially forecasted at a total cost of R5,154,478 for the first phase.

Later requests from the department of culture for amendments in the design and details, mainly in regards to an upgrade of the stage and the main building, in October 2015, drove the estimated cost for the first phase to R13,529,963 ‒ a staggering increase of more than R8 million.

The project was tendered in November 2015 and the contract was awarded on December 2015 to the lowest bidder Allied Builders Seychelles Limited (ABSL) for a sum of R11,048,857.

The proposed project was expected to be completed in three phases starting with the boundary enclosures, gates, building and stage, parking and two sets of sanitary facilities. The second phase focused on expansion of sanitary facilities and parking, while the final phase covered the construction of three buildings for various artistic and cultural activities and shows. 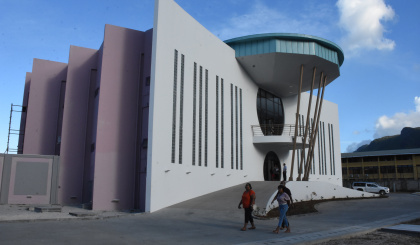 The stadium seen from the outside (Photo: Louis Toussaint) 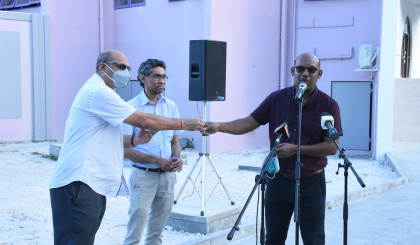 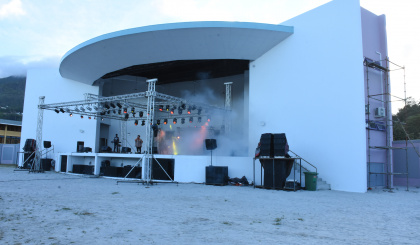 A view of the stage (Photo: Louis Toussaint)