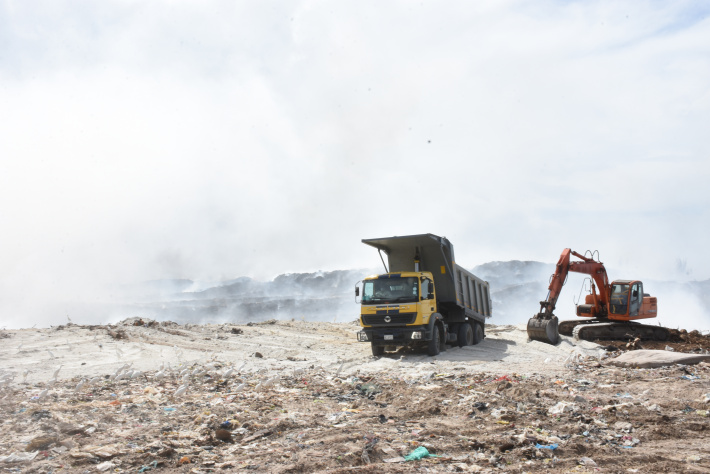 The landfill fire at Providence was under control by yesterday afternoon, and part of the highway opened temporarily to motorists travelling towards the airport just after 4pm.

It was around 2pm that media officials were permitted to enter the highway, which was closed off to motorists at that time, for an interview with the relevant authorities handling the situation on-site, namely, the Seychelles Fire and Rescue Services Agency (SFRSA), the Department of Risk and Disaster Management (DRDM), the Seychelles Police Force, the Red Cross Society of Seychelles (RCSS) as well as the Landscape and Waste Management Agency (LWMA).

At the time, the fire appeared to be much more under control as compared to the previous two days, with visibly less thick toxic fumes billowing from the site. Landfill 1 was still ablaze, although the flames were not as ferocious as that seen at landfill 2 when the fire broke out on Saturday evening, before intensifying and spreading to landfill 1 on Sunday.

Heavy machinery such as loader trucks and excavators were also working, ascending landfill 2, packed to the brim with coral fill, to cover and compact the waste so as to suppress the smoke and sparks and flames.

Senior disaster management officer at DRDM, Daniel Cetoupe, is confident that ongoing work to combat the fire and ensure that the surrounding environment is safe to motorists and business-owners of the Providence Industrial Estate will be completed by Friday.

“We are still continuing with our efforts to contain the fire, and as you can see today, there is a major improvement in the area as compared to yesterday. On landfill 1, fire is contained although it is still burning. Work is ongoing and it is basically the same job as on landfill 2, which took us two days to combat and control, but this time in consideration of the fact that we have more equipment, we expect to be able to complete the work faster,” Mr Cetoupe stated.

At least 75 percent of the work on landfill 2 was completed by yesterday afternoon and the entire scope of work (on landfill 2 only) expected to be finished by the evening.

According to Mr Cetoupe, operations were also running smoother yesterday after private organisations speedily stepped up to offer their support to the authorities and STAR Seychelles with equipment and heavy machinery to carry out some of the works to excavate, cover and compact the remaining waste. Among the assets are heavy-duty excavators and 20 and 40 tonne loader trucks, as well as Vijay Construction’s dredger.

Despite the blaze being under control, SFRSA is firstly concentrating its efforts on ensuring that it does not spread over the boundary established, to neighbouring properties and businesses, until work is completed on landfill 2, and the same process can be repeated for landfill 1.

“For the moment, we cannot work on landfill one. Simply because, the smoke is affecting vision and is suffocating to the people working, so it is a toxic environment on landfill one. However, our firemen are stationed near the north side, on the seaside of landfill 1, as we have created a boundary, and on the boundary is a heap of scrap metal, which could possibly re-ignite. So we have concentrated our forces there so as soon as it ignites, we can combat it and stop it from spreading,” said Mr Jones Madeleine of the SFRSA.

He added that SFRSA is working to full capacity, having cancelled days off for all officers and rotating different groups on scene, and overnight.

“Our officers are tired. We are considerate of their fatigue and efforts, but we have no choice. It is an emergency that is affecting the country, affecting businesses, so we have to try our best to restore the place so businesses can resume.”

Although there is no imminent danger over the coming days, some organisations will still be feeling the impacts of the blaze for some time to come, Mr Madeleine acknowledged.

In addition to businesses located in the Providence industrial zones that have been forced to close as a result of the toxic fumes, the Public Utilities Corporation’s desalination plant has had to cease operations for the time being, as its equipment is affected by fumes and smoke residue and particles.

After having evaluated the situation yesterday, Assistant Superintendent (ASP) Antoine Desnousse, head of the Traffic Division of the SPF, announced the decision to temporarily open part of the highway to south-bound motorists to ease traffic congestion in an area which is usually heavily-congested. The Cascade road was reserved for persons travelling towards north.

ASP Desnousse affirmed that the highway will remain closed unless otherwise announced, while operations are ongoing, as the command post for emergency response services is based on the highway, and to ensure the health and safety of the general public.

The fire was reported to SFRSA on Saturday evening when it was concentrated on landfill 2. Although unconfirmed, Mr Madeleine proposed that it may have been caused by a discarded lit cigarette, although he alluded to the possibility of arson.

Landfill 1 came into operation around 1997 and although is closed off to the public, is used to dispose of liquid waste, green waste and scrap metal and tires on the side. Landfill 2 on the other hand started operations in 2015 and stores mixed waste.

Chief executive of LWMA, Flavien Joubert, noted that only a small portion of the landfill will be accessible to the public after the operation, until LWMA can guarantee that the site is safe and can be ascended without any major risks.

Waste management services are not expected to be affected as landfill 2 is still accessible, even to heavy machinery.

Meanwhile a communiqué from DRDM said that, given the severity of the situation, the decision to temporarily close Part of Providence estate from Monday September 21, 2020 remains effective.

Both post-secondary schools in the area, namely the Seychelles Institute of Technology (SIT) and the Seychelles Maritime Academy (SMA) will remain closed.

The central business area from Sunshine House up to Zone 20 (access road at the highway) remains closed for business. Any owners in the area needing access for administrative or security purposes will have to make a request to the Providence Industrial Estate during working hours on the following numbers: 4374424.

This collective decision has been taken by the following agencies: SFRSA, LWMA, Ministry of Environment, department of health, Industrial Estate Authority, Seychelles Police, DRDM, in collaboration with the RCSS.

The situation is still being monitored and the public shall be informed of any new development through the media. 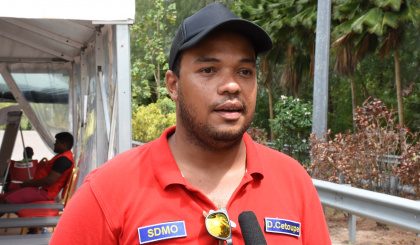 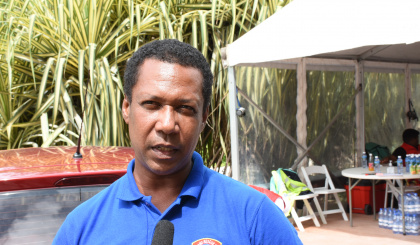 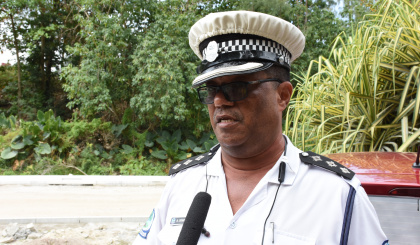 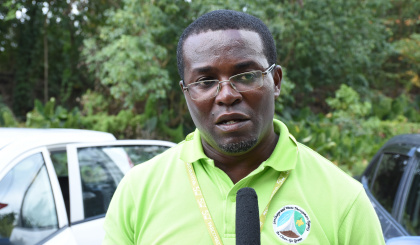