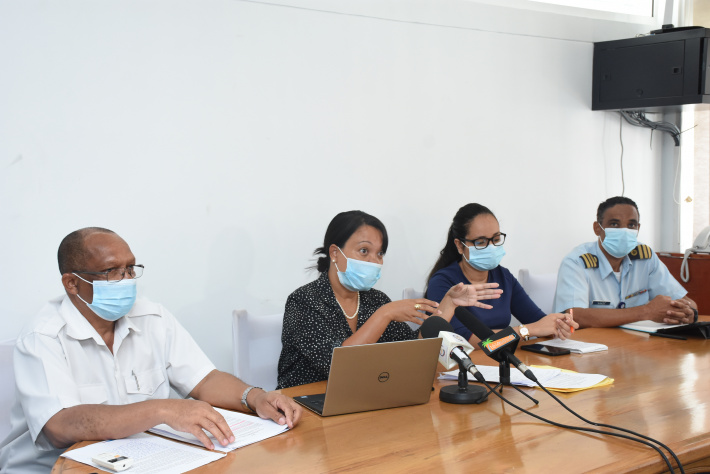 Besides administering, regulating, coordinating and overseeing all maritime affairs in the country, the Seychelles Maritime Safety Authority (SMSA), since being commissioned as an independent entity on April 1, 2020, has acquired new responsibilities which include licensing of most maritime commercial activities, coordinating search and rescue operations, surveying, registering and identifying all vessels, among others.

It was the chairperson of SMSA, Veronique Laporte, who made the statement in a press briefing at SMSA’s headquarters, Trinity House, yesterday morning on SMSA’s mandate as an autonomous body. The briefing was part of activities coinciding with World Maritime Day celebrated yesterday.

The aim of the press conference was for the management and board members to further enlighten on the roles and functions of SMSA since becoming autonomous and also on its future plans to assure safe maritime activities in our waters.

Ms Laporte said that in line with being responsible for licensing most maritime commercial activities, which was part of the work of the Seychelles Licensing Authority (SLA), a new division has been created catering for the new role of issuing operating licenses for ferries, yacht charters, dive centres and operators, among other commercial water sport activities.

She further said that SMSA is in the process of registering ships under 10 metres for identification.

She called on owners of such vessels and others above 10 metres who haven’t had theirs identified, to visit the office or to go online (www.seymaritimesafety.com) for registration for the identification process.

She noted that SMSA will set minimum standards for ships built locally, alterations and maintenance which are very important with regard to maritime safety.

She added that it would be mandatory for all vessels engaged in commercial activities in Seychelles to be registered under the Seychelles flag for SMSA to set minimum standards and have control over all vessels plying Seychelles waters.

The theme for World Maritime Day 2020, is ‘Sustainable shipping for a sustainable planet’. According to the International Maritime Organisation (IMO), it provides an excellent opportunity to raise awareness of the United Nations' sustainable development goals (SDGs) and to showcase the work that it (IMO) and its member states are undertaking to achieve the targets amid the Covid-19 pandemic.

Captain Valmont said that SMSA has so far achieved in getting Seychelles on the IMO’s Maritime Safety Committee (MSC) white list on June 2015, for being compliant to provisions of the International Convention Standards of Training, Certification and Watchkeeping for seafarers (STCW).

He added that with Seychelles being on the white list, among being recognised for produced certificates and groomed seafarers, will also allow local vessels, such as the five tankers belonging to the Seychelles Petroleum Company (Seypec), to continue with their international delivery, without being prevented or stopped and inspected, in ports around the world.

He claimed that IMO is very appreciative of SMSA for having been finally declared autonomous.

Speaking on the legal framework, Ms Ciseau said that SMSA is working to ratify new conventions in order to maintain international obligations.

She added that in the framework will be new regulations in order to have complete oversight over the inshore waters and beyond especially with regard to the beach control act.

She said that some outdated laws, such as the Control of Hire Craft act, will also be amended and modernised in line with the current maritime climate situation.

She noted that as Seychelles has signed several maritime conventions, SMSA will be working to domesticate those signed conventions that have not been domesticated.

She stated that SMSA is working in close collaboration with law enforcement stakeholders so that maritime laws in the country are respected.

Lieutenant Colonel Attala said that with the legal backing in place, it will be much easier for law enforcement bodies to take action against those who break maritime laws as their (the offenders) activities are enclosed in a legal cadre.

SMSA was created in 2004 when the Ports and Marine Division separated into two organisations. The Seychelles Ports Authority (SPA) was the other organisation formed from the separation. It has an office on Eve Island on Praslin, extending its services to the island and La Digue.

Ms Laporte said that SMSA, as an authority, face considerable challenges in terms of budget-cut and frozen posts by the government due to Covid-19 pandemic. The action therefore prevents for further staff recruitment and to acquire new assets for the enforcement of the authority’s mandates.

She noted that SMSA will continue the process of raising awareness of the public on its roles and functions and showcasing its importance as a newly established authority. Apart from information on its website (www.seymaritimesafety.com), SMSA has also launched a Facebook page.

To celebrate World Maritime Day, staff and board members yesterday participated in a live online debate organised by IMO on the theme ‘Sustainable shipping for a sustainable planet’.

The other members of the board of SMSA are Captain Daniel Hoareau, Captain Christopher Renaud, Captain Peshala Medagama, Aaishah Molle and Jude Talma, the principal secretary for Fisheries.