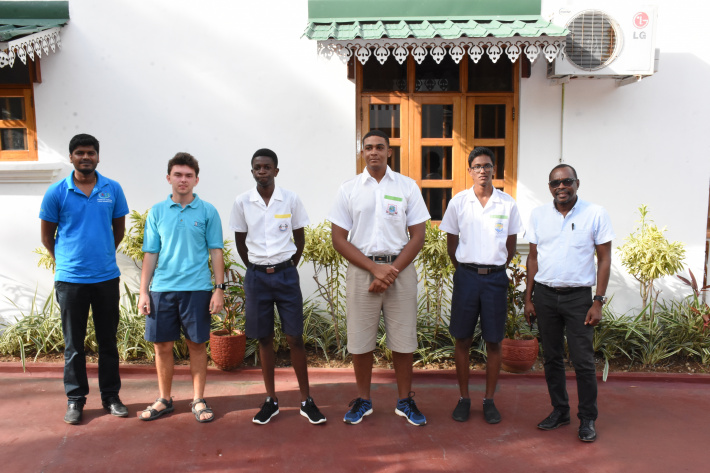 Some members of Team Seychelles in a souvenir photograph with CEO Estico (far right) and one of the mentors, Joseph Raj (far left) - (Photo: Louis Toussaint)

Team Seychelles has this year leapt up the global ranking to 46th in the FIRST Global Challenge, often referred to as the high school equivalent to the robot Olympics, with participation from almost all the countries of the world.

Last year in Dubai, Seychelles was ranked 121st out of 160 countries in the competition.

This year, Seychelles was among the 175 participating countries competing over the last five weeks at FIRST Global Challenge (FGC).

The challenge this year took place virtually on account of travel restrictions and other measures to stop the propagation of the Covid-19 pandemic. It was observed under the theme ‘Connecting Communities’ and comprises three months filled with challenges, talks by STEM professionals, and technical training sessions, all the while connecting the FIRST Global Community around the world.

Unlike previous seasons which were mainly focused on the application of robotics to solve the world’s greatest challenges, participants will this year make use of resources available locally to produce content for digital platforms as required.

The National Institute for Science, Technology & Innovation (Nisti) sought the support of a videographer to help the students and teach them the art of creating interesting content for digital platforms.

The six participating students have been selected from Science, Technology and Innovation (STI) clubs at school-level, which was launched by Nisti in March 2019, in an effort to build interest and mould Seychelles’ future STEM leaders.

Tanmay Raghwani, who is part of the STEM Program at Independent School, noted that he was chosen by his teacher.

“From the challenge we learned many new things, we made projects that reflected the theme for this year and promote different aspects of our local culture,” said Tanmay.

Russel Arachchi noted that the challenge was steady sailing but one of the main issues they had was lack of resources.

Miguel Malbrook, who last year participated in the robotics challenge held in Dubai under the theme ‘Ocean Opportunities’, is excited to be part of the challenge for the second time, regardless of the fact that the travel element has been scrapped.

“It was a really unique opportunity and I hope that this year there is another element to do with programming. I am interested in engineering and these competitions serve as a good starting place for my career. Last year was my first time and I was a bit shy but this year, I have more confidence,” he said.

Mikhail Rudchenko, who is also participating in the challenge for the second year in a row, said that last year they had only one job which was to build a robot but this year was different as there were many challenges which focused on building and making projects through social media.

He added that one of the challenges of the competition was to make a project that will solve an issue present in the participants’ country. He noted that Team Seychelles’ project focused on the lack of technological education.

“We designed a course plan and we chose Anse Royale secondary were we taught an S1 class and it was a real success and they showed much interest,” he said.

For the first time as well Team Seychelles included a student from primary school which was Ashlee Barbe. She was also the only female in the group and her team mates noted that she played a key role and her ideas were very appreciated.

On his part the chief executive of Nisti, Xavier Estico, said: “As a small-island state, we are not performing too badly. Last year we were first in the Indian Ocean but it is not enough, we want to go further and it is not impossible for a small-island state to reach the finals, although it is challenging and requires a lot of preparation. To get there doesn’t depend solely on Nisti, but rather is dependent on all of us as Seychellois.”

Mr Estico noted the biggest challenge for this season is a lack of physical space, as Nisti’s premises is currently occupied by students of Belonie secondary school.

“Now and while we are transcending this global pandemic, it is vital that we keep our global connectivity while global mobility has almost grounded to a halt. We are much grateful for the power of technologies at our fingertips. This is why for you all, the digitally-savvy cohorts, take advantage of the digital platforms to remain connected to the global network of people of your generation. This is what the FIRST Global Challenge 2020 is offering now during this pandemic, as we cannot gather in one place, as was the case for the last three editions. However, we can continue to promote Science, Technology, Engineering and Mathematics (STEM) virtually. You are called to represent Seychelles in this challenge by using your creativity, innovative talents, abilities and motivation, to make Seychelles proud on a global level.” 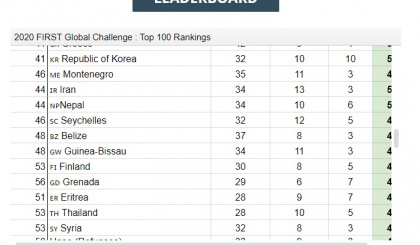