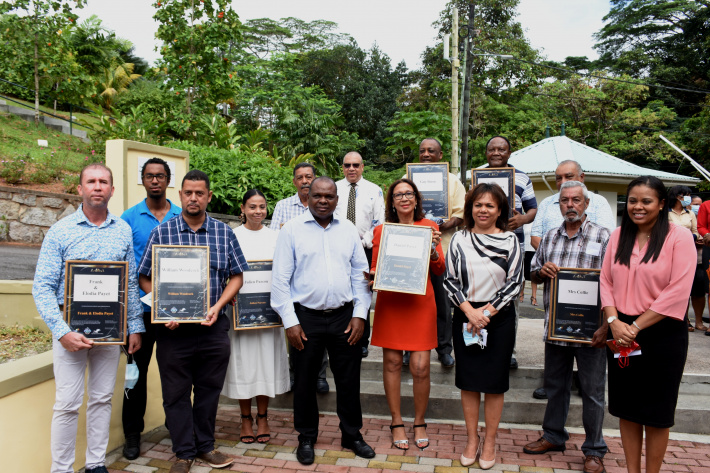 A souvenir photograph after the presentation of certificates (Photo: Anel Robert)

They are the fifth group of tourism pioneers to have their names engraved on ceramic tiles and displayed at the Pioneers Park at the Seychelles Tourism Academy (STA) as testimony to their inspired effort and innovations which have laid the cornerstones of Seychelles’ tourism industry.

It was the principal secretary for Tourism, Anne Lafortune, and principal of the academy, Flavien Joubert, who had the honour of unveiling the commemorative plaque to honour the new tourism pioneers in a small ceremony held at the park yesterday morning.

The ceremony formed part of activities to mark the 3rd Tourism Festival (September 27-29, 2020) being celebrated on a low key due to the coronavirus (Covid-19) pandemic.

Present were the Minister for Tourism, Civil Aviation, Ports & Marine, Didier Dogley; the chief executive of the Seychelles Tourism Board, Sherin Francis; the chairman of STA, John Stravens; family members; staff of STA and of the ministry; as well as a representative of one of the pioneers.

Addressing all present, Minister Dogley said that there is no better way to understand the history of our country’s tourism that has become our main economic activity, other than understanding history and the story of those who were there at the beginning, setting up and developing the tourism industry.

“Those people started at a time where it was extremely difficult to run a tourism business because tourism means that you need to have the communication with those that would like to visit you and how can you do that other than by writing a letter that takes maybe a month to get to that person and for it to come back.

“Today, when we talk about the challenges we have, these are much smaller scale problems as compared to the difficulties that the first pioneers had to deal with,” Minister Dogley said, noting that the pioneers at the time were in common very dedicated, hard working and with a clear vision of what they wanted to do.

Minister Dogley hailed the pioneers to have in their time been able to sell the warmth of the creole hospitality.

He noted that this have helped in making our country well known among well established international chains.

He further noted that although today we have all these big well established international chains, we have in a way partly lost that creole hospitality as it is not the Seychellois but rather imported labour that are standing at the forefront and serving tourists in the large hotels.

He called on those involved in the tourism industry to keep on requesting for our young people to get involved in tourism and to be ones at the forefront to sell our culture, history and other unique aspects of our country.

“The Seychelles story can only be told by the Seychellois and nobody else,” Minister Dogley said, citing this as one of the biggest challenges.

All of the family members and a representative who collected the certificate on behalf of their deceased said they were very proud, happy and honoured to be collecting their (deceased) certificates of accomplishment.

The certificates were presented by Mrs Francis.

“I think it is important for them to be recognised for what they have done for tourism in Seychelles,” one said.

Frank and Elodia Payet were the owners of Rose Cottage at Pointe au Sel on Mahé in 1969. After 10 years they moved to Praslin and started Le Duc de Praslin at Côte D'Or. Their dream hotel, ranked among the best tourism establishments in Seychelles, is now being run by their son Robert.

Daniel Payet was the proprietor of Britania Guest House on Praslin in 1963. He started up in 1961 with the opening of a shop selling basic consumables after which he and his wife extended the shop and opened up the Britania restaurant that also served as a dance hall. In 1970 they added four rooms and the Britania became a small hotel. The hotel is now being run his daughter Lydia Lablache and her husband Jonas.

Norman Medhurst Esslemont was the owner of Avis/Norman’s Car Hire, established in 1972 with only 8 cars. It was the first officially licenced car hire in Seychelles.In 2012, it was awarded special recognition for 40 years of Outstanding Service by AVIS. Today the fleet stands strong with the maximum allowed 30 cars of different groups

David Joubert, at one time the strongman of Praslin island politics in the Seychelles, was the country’s first appointed tourism minister in 1975. He retained that portfolio after Independence in 1976.

Julien Parcou was the owner of Capital Restaurant & Bar in Victoria. He began his trade before the Second World War as a baker in St Louis and later got involved in the processing and export of cinnamon and patchouli, before diversifying in a number of other products and services. He was Market Street’s largest trader in home appliances and also one of the first to offer ice-cream and cold drinks in the area.

Jessie and Carl Collie were the proprietors of Harbour View Guest House, Mont Fleuri, since late 1976. The name was because the harbour could be seen from the Guest House. When Mr Collie passed away, Mrs Collie continued the business until it was sold about 10 years ago.

The setting up of the Pioneers Park in 2015, apart from recognising the pioneers who have dedicated their lives, energy and know-how for our tourism, act as a source of motivation and inspiration for the students and visitors. 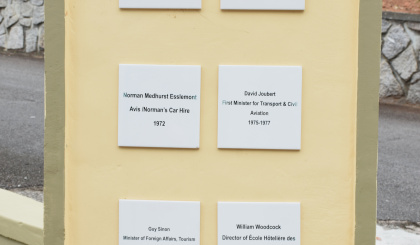 The names of the eight tourism pioneers displayed in the Pioneers Park at the STA (Photo: Anel Robert)