A ceremonial sitting in honour of Chief Justice Mathilda Twomey was held yesterday in Court Room 1 at the Palais de Justice to bid her farewell as she came to the end of her five-year mandate.

This event was attended by President Danny Faure, Vice-President Vincent Meriton, the Speaker of the National Assembly Nicholas Prea, Ombudsman Nichole Tirant-Gherardi, the President of the Court of Appeal Anthony Fernando, high level government delegates, members of the diplomatic corps and other VIPS including senior counsel members and judges.

The sitting was presided by Judge Mohan Burhan. Other senior counsels and members of the Bench, namely K. Shah, B. Georges, D. Sabino, E. Wong, Alexia Amesbury, Nichol Gabriel and Raja Sundaram talked about the outgoing CJ and the work she accomplished during her tenure. They all spoke about how she brought a much needed reform in the Judiciary and how she was accessible to all the lawyers and staff of the Judiciary.

The highlight of the afternoon was undoubtedly the speech of CJ Twomey with the theme ‘Courage my Country’. To complete her tenure she made five calls to action (one for each year she has been Chief Justice): A call for constitutionalism; a call for accountability; a call for dismantling patriarchy; a call to vigilance and a call to courage.

CJ Twomey started her speech in a very emotional tone relating a case of a Praslinois whose mum had an accident with a Tata bus. “His lawyer had been successful in securing a settlement of her claim with SPTC, but had failed to pass that money to his client. He had retained the bulk of the money. None of the money had spent any time in the legally mandated clients’ accounts. The clients were poor and trusted their lawyer. But the technicalities of law were unknown to the man, who wrote to the Chief Justice asking for her to intervene to obtain a packet of nappies that he needed to care for his mother. The letter itself was heartrending, but the indictment on justice in Seychelles left me reeling. I realised how desolate the judicial landscape was in Seychelles, that the Judges and the lawyers knew that this had been going on.”

CJ Twomey noted that many of these people in this room knew the situation she was talking about. “We took steps to discipline the individual lawyer, but this was overturned and more and more promises were made, but despite my best efforts, I am not sure she ever received the money and she passed away. I am sorry, Mrs Hetimier. We come to this room with unclean hands, and today I am not shaming us, as we deserve, but imploring us all to take a stand to do what’s right. That is the essence of what I want to say today.”

State of the Judiciary

CJ Twomey talked about the time she commenced her tenure. “In 2014, the Bar Association wrote the following about the state of the Judiciary upon the end of the tenure of former Chief Justice Egonda-Ntende:“5 years ago, the Seychelles Judiciary was in shambles. The backlog of cases just kept on increasing due to bad practices, policies and resources. In one of his earlier speeches, Chief Justice Egonda-Ntende remarked that if the Seychelles Judiciary were a person, it was a patient in the Intensive Care Unit ("ICU") of a hospital. It is perhaps safe to say that the patient has now been released from hospital but must still come in for regular check-ups. It is hoped that the impending change of his medical doctor does not put the patient back into ICU.”

She noted that unfortunately, Chief Justice Egonda-Ntende’s departure and the 12-month gap, had created a leadership vacuum, and much of his work came undone.

“I was overwhelmed by the backlog and could not believe that people had waited so long for their cases and for their judgments. Transcripts of proceedings were not in files; files were in disarray. Staff morale was low. There were unnecessary and meaningless court hearings. Cases were regularly adjourned, judges were unprepared, or did not have the information in their case files to adequately prepare. The quantity of cases was high, but the quality of the adjudication was disappointingly low. A culture of apathetic mediocrity and professional protectionism on the Bench and at the Bar had stymied the judicial process,” stated CJ Twomey.

But as soon as she took up the challenge, she galvanized her team and they were set to work. “We revived the same objectives and recommitted ourselves to an agenda of change. We standardized procedures, and improved our record and case management. We recruited new magistrates and judges, researchers, a Public Relations Officer, specialists in the library and archives. We adjusted the management structure, giving greater autonomy to section heads. We appointed thematic committees, and attempted to devolve power and decision making to leaders within sections. I am so proud of the team that I have been able to work alongside – from the excellent judicial officers, the dedicated registry staff, management team and other support staff. We have worked so hard, but we have also had so many really enjoyable moments together,” she explained.

The backlog was reduced and CJ Twomey still remarked that “We have not achieved all of our goals. We have not even come close. Our Annual Reports, our statistics and our judgments, are indicative of positive changes, however, we remain the most vulnerable arm of government and my hope is that my successor will manage to remain vigilant to the challenges that threaten the Judiciary.”

CJ Twomey maintained that she is ending her term not for any speculated reasons that she heard. “I am a person of my word. I agreed to take up this position, for a limited period, to build on the progress of my brother, former Chief Justice Frederick Egonda-Ntende. I now make way for a new Chief Justice, whom I hope will be able to build on what I consider successes, and achieve those things I was not able to. I committed to leave the Office of Chief Justice after five years because I believe that long periods of service, particularly in positions of leadership and power, are a key way in which a public servant forgets their mandate and loses their vigour, and the role becomes less about the noble office, but the individual that holds it.”

CJ Twomey noted that Seychelles is small, but it has a seat at the international table that it could take up if it were willing to rise above its self-set limitations. “I believe that we currently underachieve – we sell ourselves short with petty in-fighting, political bargaining and hostility to much needed foreign capacity building. We should be humbled by the importance of the roles that we get to play, and remain inspired by our potential.”

CJ Twomey concluded her remarks in these words “So, I sit here before you with mixed emotions. I am proud. I am tired. I am angry. I am sad. I am disappointed. I am sorry that Judiciary is not more, but I promise I will support. I will encourage. I will remain vigilant and I will join you in the fight as you continue with the work we have started.”

Seychelles NATION will publish in a future edition the five calls for action as stated by CJ Twomey in her farewell message. 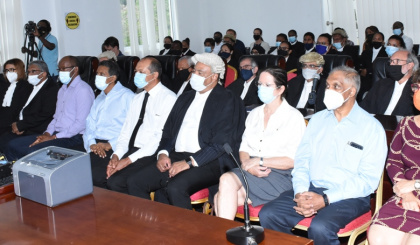