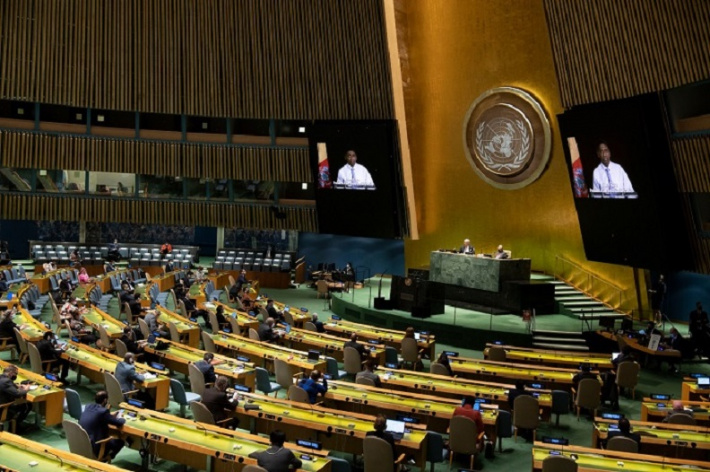 The pre-recorded video statement of President Faure being aired at the high-level UNGA meeting (Photo source: department of Foreign Affairs)

President Danny Faure participated in the high-level plenary meeting of UNGA to commemorate and promote the International Day for the Total Elimination of Nuclear Weapons.

During the high-level event, through a pre-recorded video statement, President Faure called on world leaders to eliminate the use of nuclear weapons saying, “The world is weary of an era of converging global conflicts, widespread poverty, climate breakdown, economic downturn and a global pandemic. We are already mobilising extensive resources to remedy challenges beyond our means. The world does not need another load added to the existing threats.”

The president highlighted that its elimination should be based on humanitarian grounds, which will bring durable peace, security and sustainable development.

“All member states have committed themselves to taking on a cohesive approach towards a nuclear weapon-free world. Seychelles is no exception. I consequently call on those States owning nuclear weapons to converge their efforts to adopt immediate action in nuclear disarmament. This is the actual point of departure for a world free of weapons of mass destruction,” he said. “Let us build trust among our nations, without nuclear weapons, for the prosperity of our planet and well-being of the people.”

Seychelles’ leaders working together in the best interest of the country | 28.10.2020