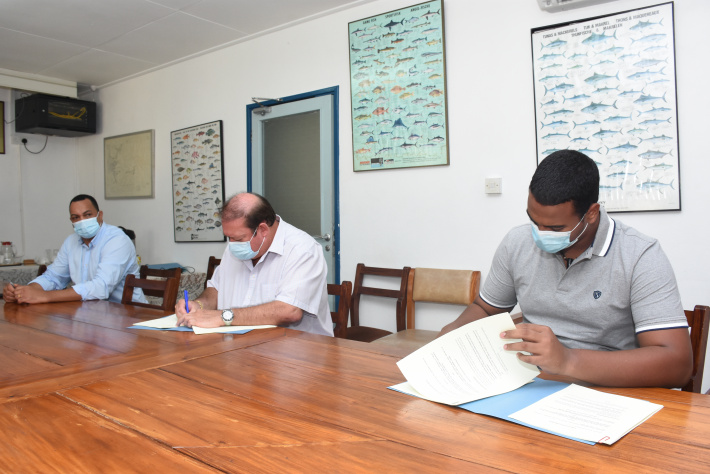 The Bel Ombre fishing port will soon be fully engaged in fish processing now that three local businessmen from the district’s fishing community have been allocated with their fish processing units by the Seychelles Fishing Authority (SFA).

At their own expenses, the businessmen will have to design their fish processing units according to the type of fish processing business they will conduct inside. Among the four open space fish processing units, covering 200 square metres of processing floor each, SFA has reserved one unit for its aquaculture project. The aquaculture unit will help to fast track the availability of the cultivation of sea urchin and sea cucumbers for small scale private owners.

The signing of the legal tendered agreement between Naron Payet from the Bel Ombre Fresh Seafood, Danny Loizeau from the Bel Ombre Fish Centre and the chief executive of SFA, Nichol Elizabeth, took place yesterday morning at the SFA headquarters in Victoria.

It is to be noted that a third tenant, Daniel Hoareau from D&W SEAFOOD PROCESSING, was not present to sign his documents.

Though the processing units is aimed at entertaining the local market only in terms of fish grating and fish fillets, both Mr Payet and Mr Loizeau, owners of various fishing vessels, said they would also like to venture into secondary value added products such as fish balls, smoked fish, fish burgers, among others, for the local including exporting those products regionally or even to the European Union (EU) markets if given the go ahead by SFA.

They claimed that doing some exporting, though on a small scale, will get some of the much deserved foreign exchange to enter the Seychelles economy, especially in this time of the coronavirus (Covid-19) pandemic.

The fish processing facility, housing the four units, was initiated in 2014 and completed in September 2020. There were delays in construction due to project concepts, discussion, procurement and planning approval. It was funded through the EU sectoral support at a cost R12,188,000.00

According to Mr Elizabeth, the fishing processing units have to be EU certified first before they will be able to open their doors internationally.

He said that SFA will work with the Seychelles Bureau of Standard (SBS) for the possible EU approval of their products when they get started.

He explained that the units were built with the idea of promoting value addition for the local market and called on them though to make good use of their acquired facilities.

As per the signing agreement, the fish processing operators have 24 months to establish their business without having to pay rent. But they will have to pay a deposit equivalent to a month’s rent, 14 days from the signing of the legal tendered agreement.

Ronny Antat, the development and assessment manager at SFA, said that similar units might be constructed in the future, however, these will be based on the need of the country and thereby governmental policies and concerns.

He noted that it makes common sense that value addition becomes a primary focus for the fishing sector in order to create employment and open other avenues for the finished products, hence better economic contributions all around.

To obtain the units, the tenants went through the routine bidding process as per the conditions set out by the Procurement Oversight Unit (POU). 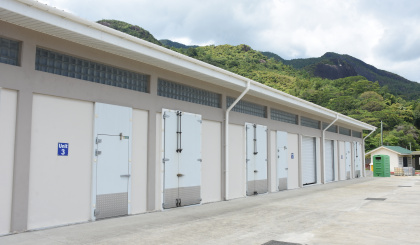 The fish processing units seen from the outside (Photo: Thomas Meriton)