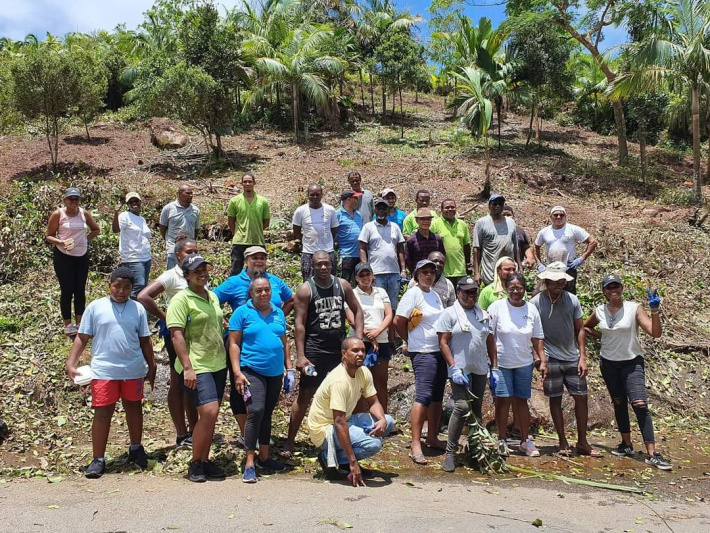 The team in a souvenir photograph after a job well done

Staff from the Ministry of Fisheries and Agriculture (MFA), Seychelles Agricultural Agency (SAA) and the National Biosecurity Agency (NBA) gave up their Saturday morning to continue with land clearing at Montagne Posée, Au Cap, on the plot of land that has been designated for a National Orchard as an agro forestry project.

The team was led by Minister for Fisheries and Agriculture Charles Bastienne, his two principal secretaries – Jude Talma (fisheries) and Antoine Marie Moustache (agriculture) as well as special advisor for Fisheries, Roy Clarisse.

From 8.30am to 12.30pm the staff were hard at work equipped with chainsaws and machetes to clear out and throw away the biodegradable waste that was piled during the week to prepare the land for the ‘Seychelles Food Week’ from October 12-16, 2020.

During the week-long activities, the National Orchard will be launched on this plot of land that spans over 10-15 hectares and on which different types of fruit trees will be planted.

This activity is in line with the Food and Agriculture Organisation’s (FAO) theme for this year’s World Food Day on October 16 which is to ‘Grow, Nourish, Sustain. Together’.

The chairman of the ‘Seychelles Food Week’committee, Keven Nancy, told the media on Saturday that there is still a lot of work that needs to be done to prepare for the launch of the National Orchard considering the size of the land hence why staff of the ministry, SAA and NBA joined forces to bring their contribution and take ownership of this activity.

“We are also encouraging other national stakeholders, ministries, agencies and private entities to join us in this National Orchard project so that the land can be ready for the planting of fruit trees during the Food week,” said Mr Nancy.

Mr Nancy also reassured the public that during the site clearing, endemic plants as well as palm trees that were already on site were not cut down or destroyed but were protected as part of the project.

“This is like an agro forestry project where everything is grown in harmony with the environment so that there is minimum impact on the area so it will be a source of genetic protection for plants,” Mr Nancy added.

Some 50 fruit trees will be planted in the first phase of the National Orchard and will feature a wide variety of fruits that are common locally such as mangoes and oranges but there will also be some less common ones such as ‘sapot’. The idea behind the National Orchard is to contribute towards food security in the country and also act as an attraction for both locals and tourists. The ministry also received helped from prisoners of the Montagne Posée prison last week and they did quite a lot of work to cut down trees and shrubs to clear the land.

Text and photos contributed by the Ministry of Fisheries and Agriculture 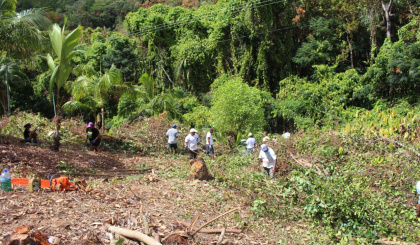 The clearing activity in full swing