A souvenir photograph with guests after the certificate presentation ceremony (Photo: Patrick Joubert)

It was the chairperson of the independent watchdog, Gerard Lim Sam, who had the honour of launching the mission in a small ceremony held at the Care House on Saturday morning. With the help of sponsor Cable & Wireless Seychelles, he also launched the Citizens Democracy Watch Seychelles (CDWS) hotline number 2519888.

Present were the chairperson of the Electoral Commission Seychelles (ECS) Danny Lucas, the political/economic assistant for the United States embassy represented in Seychelles, Marie-Annette Ernesta, and fellow members of CDWS.

Election observation is the process of information gathering, eye witness and on-site fact-finding and making an informed judgment about credibility, legitimacy and transparency of an electoral process. While the election observers can note, recognise and identify abnormalities in the voting process, they are not allowed to intervene.

Election observation is also made and done against set standards with the aim of assessing whether the electoral process was conducted in accordance with the laws of the country including whether the country’s electoral framework conforms to international and regional principles, norms, standards and best practices.

As for the observers, they must conduct themselves according to the highest professional and personal standards and behave in a manner consistent with the role of independent and impartial observers.

In addressing the gathering, Mr Lim Sam noted that since the 2015 presidential election, and following the announcement date of the 2016 National Assembly election, CDWS has continuously been observing post election period and preparations for the forthcoming elections.

He said operating with a full secretariat, on the three days of polling, the CDWS will not limit itself to observing at the polling stations only but will also be on the field within the communities, observing the behaviour of electorates, polling agents, security officers and the media houses.

“As the country prepares for the presidential and National Assembly elections, CDWs urges the citizens of Seychelles, political leaders and all stakeholders to demonstrate a good sense of political maturity, respect and tolerance and a spirit of democratic engagement. CDWS reaffirms its commitment to observing the electoral process in an impartial and professional manner,” said Mr Lim Sam.

He also called on election observers to undertake their duties in strict adherence to the code of conduct and to observe the election objectively in accordance with the electoral laws of Seychelles and the international benchmarks.

During the ceremony, 16 new electoral observers who took part in three whole day training workshops on Saturday during the month of September 2020, in relation to elections principles and guidelines, were presented with their certificates. Some of them will be among a group of 30 CDWS observers who will be observing the three-day elections alongside other local and international observer missions.

On taking their oaths before the chairperson and others present, before signing their pledges, the 16 new observers pledged to follow CDWS’s code of conduct, to maintain strict political impartiality at all times, not to obstruct the election process, to respect and promote the human rights and fundamental freedom of the people and to protect the integrity of the international election observation mission and will follow the instructions of the observation mission.

The United States of America through its embassy in Port Louis, Mauritius, has granted financial support to CDWS’ voter education and information programmes ahead of the elections. Speaking virtually from Mauritius, to all present, the US ambassador to Seychelles, David Reimer, said the embassy is proud to have supported CDWs in its mission to promote a broad Seychellois public participation and civic awareness, to strengthen suicidal oversight of the 2020 presidential and National Assembly elections and to advocate for open and effective election administration.

“By promoting democracy, our intention is not to dictate to our friends and neighbours how they should organise their society. What we are trying to do is hold up democracy as a good model of government and society that promotes a better world for us all,” he said, noting that democratic countries are more peaceful and prosperous and are less likely to go to war with one another.

Ambassador Reimer stated that the United States of America stands ready to work with the government that is elected by the Seychellois people. He said that elections are a fundamental part of democracy, one which his country supports. 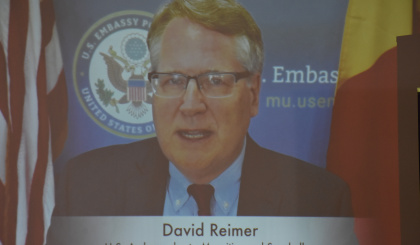 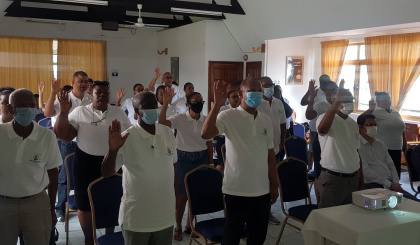