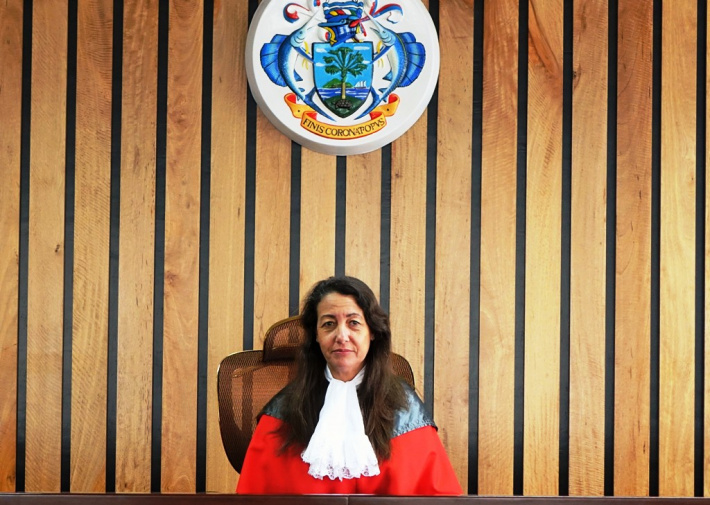 The Supreme Court of Seychelles recently bid farewell to its Chief Justice Mathilda Twomey, who served from August 2015 to September 2020. In a mere five years she has taken on the highest case load of a Supreme Court Judge and restored judicial timeliness, efficiency, and transparency. While she’ll be missed as Chief Justice, Dr Twomey will remain as Justice of the Court of Appeal. Upon her departure she delivered a heartfelt and compelling speech which Seychelles NATION already published. In 2016, she said “I believe that justice delayed is justice denied.” During her tenure, she made everything possible to remediate the situation. But who is Dr Mathilda Twomey?

She was admitted as a Member of the Bar at Middle Temple, London and as an attorney-at-law in Seychelles in 1987. She holds a master's degree programme in Public Law from the National University of Ireland; and in 2015, she completed her PhD from the same institution.

In 1987, Dr Twomey started her career as a legal practitioner by first serving as a barrister in the Ocean Gate Law Centre. She has also worked in the Attorney General’s Chambers and as an attorney-at-law in private chambers.

She was one of the selected members of the Constitutional Commission who were instrumental in drafting the Constitution of the Third Republic between 1992-1993. In 1996, she also worked as regional coordinator for Multiple Sclerosis Ireland, upon moving to Ireland in 1995.

Dr Twomey also wrote a book entitled ‘Legal Metissage in a Micro-Jurisdiction: The Mixing of Common Law and Civilian Law in Seychelles’ which outlines the vigorous mixing of the laws of the common law and civil law traditions that took place after Seychelles became a fully-fledged colony in 1903.

Contributions to the judicial system:

Dr Twomey served as Chair of the Civil Code Review Committee (CCRC), a commission set up under the patronage of the President of the Court of Appeal to revise the Civil Code.

She was actively engaged with the Indian high commission to secure the funding for the Magistrates Court building and also chaired the Child Law Reform Committee set to review laws protecting children against sexual abuse.

Dr Twomey instilled the regular publishing and updating of the Seychelles Law Reports and amended rules for the conduct of election petitions, and introduced rules for matters brought under the Proceeds of Crime (Civil Confiscation) Act and increased the court fees and costs. She has finalised new rules for Pupillage and the Bar Examination.

During her term, she introduced a four-year plan to take the Judiciary from 2016 to 2020, with the key goals of reducing backlog and the cases in the system, speeding up the efficiency within the Judiciary and ensuring that it is more accessible, accountable and fit for purpose.

As Chief Justice, she sat on the Sentence Review Tribunal with adopted sentencing guidelines for offences under the Misuse of Drugs Act and heard the cases brought to the Sentence Review Tribunal under the MODA 2016. She also sat on the committee of legal experts that drafted the Lilongwe Principles and Guidelines on the Recruitment of Judges adopted by the Southern African Chief Justice’s Forum.

She established Court Practice Directions to secure the attendance of attorneys at trials and for the case management of civil and criminal cases at Supreme Court and Magistrates’ Court levels and reintroduced legal training for Judges and Magistrates and worked with the Southern African Chief Justices Forum (SACJF) and Judicial Institute for Africa (JIFA) for Judges and Magistrates to secure judicial skills and leadership training, including training in specialist fields like Human Rights and Environmental Law.

The former CJ grew the office of the Chief Justice with the recruitment of highly skilled legal researchers, who are instrumental in producing research on Seychelles, foreign, and international law for the purpose of assisting individual judges with their cases and legal issues affecting the Judiciary.

A Public Relations Officer was hired under the Office of the Chief Justice, and the Library and Archiving services.

Dr Twomey personally oversaw the handling of complaints against Judges and attorneys, the terms of pupillage and swearing in of all pupils, and officials.

She found time to teach on the Bar Vocational Course, and examined Civil Code for the Bar Examination. She also actively supported Seylii (the online publication of judicial decisions) and the teaching of law at the University of Seychelles and oversaw the implementation of the Strategic plan, holding judicial officers, lawyers and court staff to account for failure to comply with established timelines and procedures.

WORK THROUGHOUT THE YEARS

Conducted criminal and civil litigation in all courts and tribunals. Conducted conveyancing of property and drafted and executed leases and agreements

Undertook the prosecution of serious criminal cases, defended the Seychelles Government in civil suits, represented the Seychelles Government at international conferences, trained and assisted state counsel, prosecutors and the police department in assembling evidence and undertook prosecutions in all courts and tribunals, conducted the conveyancing of state land and leases, drafted and advised on contracts at national and international level

In 2019 alone, 146 backlogged cases were cleared and the average age of pending cases dropped across the board. The Supreme Court and Magistrates Courts have begun to consistently meet the expected timeframes for the hearing of cases and delivery of Judgments adopted during the tenure of Chief Justice Egonda-Ntende.

Chief Justice Twomey has shown a tremendous amount of both courage and commitment to the Judiciary over the past five years. Her personal integrity and willingness to actively engage with all aspects of the Judiciary’s work has raised the standard for other judicial officers and her successor will hope to capitalise on the gains made in order to continue the modernisation of the Judiciary.

“Mediocrity, laziness, avarice and complacency are the enemies of access to justice.”

“The right to access information is a fundamental right contained in the Constitution, and so the absence of such legislation is an oversight which inhibits the access to justice of our citizens.”

“I want to see a judiciary that is independent, transparent, efficient and dignified. I want to work in a place where people are proud of the quality of the work that they do, and a place that promotes the ability of individuals to access timely justice.”

“We have adopted a Constitution, which explicitly reminds us of the fact that we are descendants of different races who have learnt to live together. Furthermore, it acknowledges that the foundation for justice in our country is the recognition of the inherent dignity and the equal and inalienable rights of all members of the human family.”

“For too long we have permitted an atmosphere of ‘kankan’ and harmful gossip to disintegrate our internal coherency. Everyone is different, but each are equally deserving of having their dignity respected. As a legal profession, even as a country, we need to stop this habit of devouring our own.”

Compiled by Vidya Gappy/Office of the Chief Justice 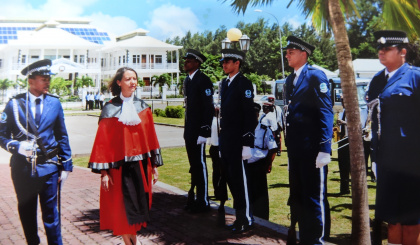