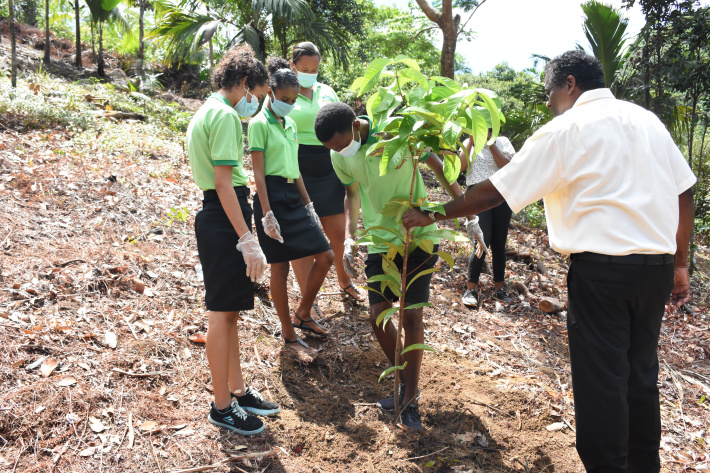 Agro-forestry development at the centre of celebrations

Collectively improving agro-forestry and encouraging youth involvement in the agricultural sector for long-term results are the highlight of this year’s Seychelles Food Week, an activity organised annually to coincide with World Food Day, on October 16.

In line with the Food and Agriculture Organisation (FAO)’s theme ‘Grow, nourish, sustain. Together. Our actions are our future’, the Ministry of Fisheries and Agriculture yesterday launched two important projects aimed at improving food security, by boosting local production and reducing the level of importation.

Minister Charles Bastienne officially launched both projects, starting off with the National Orchard, located at Montagne Posée, the first of its kind community project which will eventually become home to fruit trees of all varieties, as well as being an attraction for both locals and visitors.

The project which is presently is its first phase, comprises 10 to 15 hectares of land which the ministry hopes will be covered with fruit-bearing trees in a few years.

“We made a start on the project today, we started the clearing and planting and we hope to in future grow to use the maximum of the plot allocated to the project, since such a project will contribute towards the country’s food security. There will be a variety of locally produced fresh fruits, and in addition, it will facilitate propagation of such plants,” Minister Bastienne explained.

The National Orchard is to be managed by the SAA who will also be responsible for maintaining the vast garden.

The second project Minister Bastienne launched is called La Semence, Youth Farming Enterprise, at Au Cap. Under this project, funded under the Livestock Trust Fund, a dozen youths selected by a committee have been allocated plots of around 3,000m2 to 3,500m2 at Au Cap for agricultural development (see separate story on page 7).

The accompanying photographs by our photographer Anel Robert show some highlights of the tree planting exercise at the new orchard. 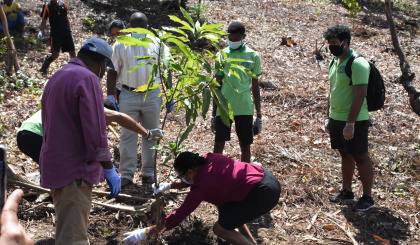