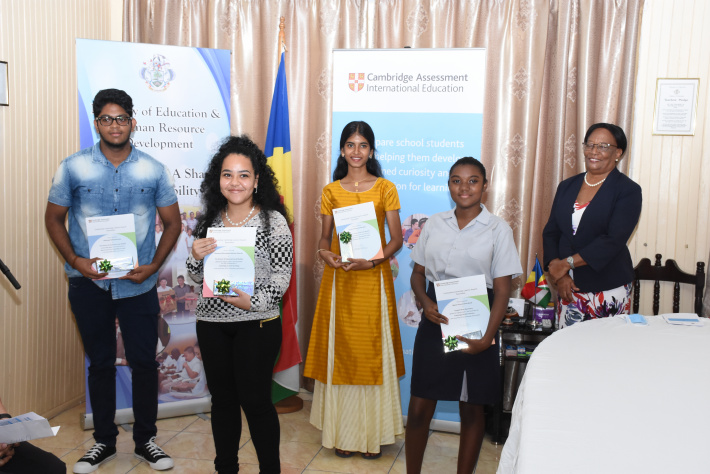 The high achievers in a souvenir photograph with Minister Simeon (Photo: Louis Toussaint)

The Ministry of Education and Human Resource Development (MEHRD) held a ceremony for the best Cambridge award winners who were in public schools. Abisheak Sathiyamoorthy was awarded the first place for ‘Best across four in country’ and Sarojini Padayachy Murugan was awarded the second place in the same category.

In light of Covid-19, the small and restricted ceremony was held at the ministry’s headquarters at Mont Fleuri with Minister Jeanne Simeon in attendance as well as the parents of the awardees.

Usually a representative from Cambridge comes to attend this event but due to the current situation, this has not been possible.

The students from government institutions have won a total of eight awards with five students collecting the awards. The other winners are Maeve Frina Andrea Bonte with the award ‘Top in Seychelles’ in Chemistry for the Cambridge IGCSE exams 2019; Alexandria Bernadette Nathalia Eulentin received the ‘High Achievement’ award in Cambridge A Level in Sociology and Pria Mohan Chavda received the third place in ‘Best across three in country’ in the Cambridge A Level.

Abisheak Sathiyamoorthy said he is happy with his achievement and he thanks his parents and teachers for their sacrifice and help.

“I feel that everyone can achieve this if they have the motivation and dedication. My career choices for now are medicine and engineering. So far I have not chosen anything yet and it will all depend on the health crisis.”

Miss Bonte also was happy to have achieved this result. “I did not expect this result and so far I am happy doing Maths, Biology and Chemistry at the School of Advanced Levels (Sals). I would advise the youth to keep focusing on their studies and not let themselves be distracted.”

For her part, the principal secretary for education, Dr Odile de Commarmond, had this to say: “Many people compare the public schools to the private schools. These two are incomparable as one is being financed by the parents. Private schools are for the elite group and if a student is not performing well, he or she is removed from the school. Whereas public schools accept every child, regardless their background! So the great achievements from the public schools are spectacular achievements also for the Seychelles education system as a whole. The students have done their best and we also recognise the efforts of the students. We at the MEHRD already congratulated the students and the teachers in our various award ceremonies before Cambridge sent their lists. We often get negative remarks from the community but we keep focussing in our work and celebrate the success. Every year, Cambridge put together a list of the best students around the world according to their own criteria. We will keep working hard to elevate the level of the students with new strategies we are working on.”

Talking about the Cambridge Award ceremony, PS de Commarmond said: “Every year the Ministry of Education and Human Resource Development organises three Award ceremonies: one for Primary Six students who perform well in the P6 National Examinations; one for secondary students who perform well in the S5 National Examinations, the IGCSE examinations and the DELF Scolaire examinations and one ceremony on behalf of Cambridge for the Cambridge Best Learner Award. With regard to the latter, the Ministry is not mandated to organise any award ceremony, however we have been doing it because when we have representative from Cambridge every year, it is better to have one ceremony as the representative usually comes for one day specifically for that. This year we are not having any Cambridge representative and with restrictions in gathering the ministry feels that it is in the best interest of all parties if each organisation/institution organises their own ceremony to reward their best performers based on the list forwarded by Cambridge. The best learners all received tokens and certificates from Cambridge.”