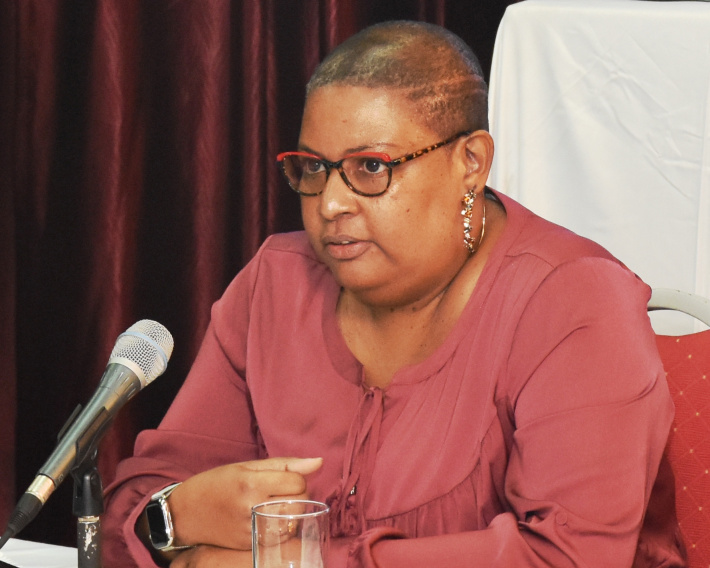 Central Bank governor Caroline Abel yesterday echoed similar sentiments to previous weeks, urging all economic actors to play their role and act to exercise prudency as a means of stabilising demand for foreign exchange, and ultimately ease the pressure on the country’s critical reserves pot.

Speaking at a press update held at ICCS, governor Abel noted a slight improvement in the supply of foreign exchange to the market, but that demand remains persistently high, cautioning that if demand is not stabilised, there is a risk of further depreciation in the rate, as was the case in April when both supply and demand of foreign exchange fell sharply.

“The reality is still the same and it is worrying for us. But we have observed that demand for foreign exchange remains high. As Central Bank we have been putting some reserves also in the system, but given that we see this significant increase in demand, especially since the beginning of the month, it is almost the same as the same time last year,” said governor Abel.

“For us it is worrying that if this divergence between demand and supply increases significantly, there will be an adjustment in the exchange rate, and because we have a flexible exchange rate regime, the consequence of that is rising prices in the local economy. The message that the CBS has been highlighting since the end of March, is for us to realise we are in a different economic landscape and that landscape demands that we change our behaviour because if we don’t the consequence will be felt in the foreign exchange market, through a higher exchange rate,” Ms Abel noted.

The rate of a USD ($) on October 14 stood at R18.61, compared to the rate for Euros (€) which stood at R22.05. Over the week of October 8-13, US $5.7 million was supplied to the market, while demand stood at US $7.0 million. In a bid to ease pressure of the market, CBS has since the start of October injected US $2.0 million to the market through foreign exchange auctions with financial institutions, as well as supplying the Seychelles Trading Company (STC) with US $0.4 million.

With regard to CBS’ outlook for the coming months, Ms Abel once again emphasised the looming uncertainty over the key economic activity from which Seychelles generates foreign exchange, tourism. Irrespective of the airport re-opening and measures to attract visitors to our shores, it is imperative that everyone remains realistic about the global economic crisis, she said.

In particular, Ms Abel drew attention to the global contraction of 4.4 percent, rising income and gender inequalities, growing restrictions on trade and investment as well as rising geopolitical uncertainty, all of which present consequences for the local economy, which is heavily reliant on importation, tourism arrivals and earning and fisheries exports.

Other factors which could potentially be more destructive to the domestic economy is the second wave of the Covid-19 pandemic in key tourism markets such as Europe and the domino effect on the aviation industry and the behaviour of consumers in general.

On the domestic front, Ms Abel highlighted uncertainties in relation to labour, noting the complexities of labour surplus and wage dynamics, rising inequality and welfare considerations, as well as health and economic decisions.

“One of the things we consider is fiscal, and this year, as had been evident around the world, fiscal stimulus. The government sector has played a more active role in the economy than usual, and it has injected more money than usual. If we look at other countries, additional budgets have been discussed, but in our context, how much more can we do? What are the public’s expectations as to what the government can do? Do we have the means to do it? The overall budget for 2021, in consideration that the economic reality which is mainly negative will prolong, it results in uncertainty as to how much revenue the government can generate since economic activity in 2020 has been low. How much tax will government collect?” she said, highlighting some of the uncertainties which CBS has to weigh up and consider in order to implement the right monetary policies and maintain price stability.

In consideration of the “fragile economy”, Ms Abel asserted the need for shifts in individual and collective behaviour which is critical for the exchange rate path and to prolong the reserves for the longest possible timeframe.

With regard to the relief measures put in place for the private sector, governor Abel advised all who have opted for a moratorium on loan repayments through financial institutions to approach their respective institutions should they require a further extension, as loan repayments are to resume after the agreed timeframe.

She further advised persons at risk of being made redundant to also approach their respective financial institution so as to make arrangements with regard to their loan repayments.

With the objective of educating the public about protecting themselves from falling victim to online scammers, CBS has produced an educational video available on its website.