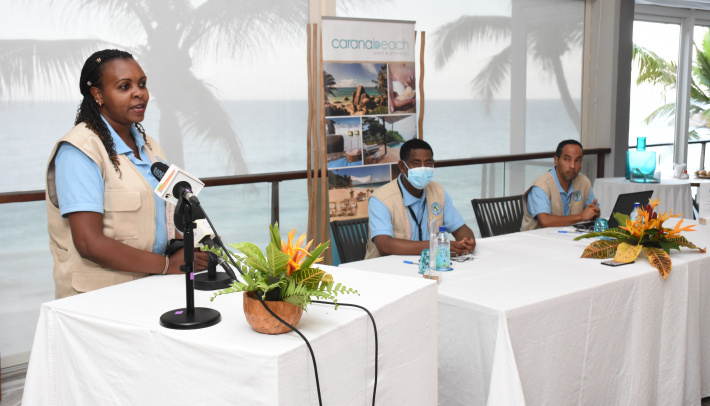 The release of the first initial report by the EASF team (Photo: Joena Meme)

First initial report released by EASF after day one

The Eastern Africa Standby Force (EASF) was the first institution among the various observers to release its first initial report after the first day of election yesterday, October 22.

The report was shared with the press yesterday afternoon at the Carana Beach Hotel by the head of delegation Dawit Assefa Wassihun.

“EASF election observer mission has observed a high turnout on the first day of special voting on some outer Islands, Praslin and on Mahé. This election is fundamental to the political situation in the Republic of the Seychelles where the election is being highly contested by three candidates for presidential and four political parties and two independent candidates for the parliamentary seats,” noted Mr Wassihun.

The report also underlines that “the EASF-EOM notes with satisfaction that the first day of special voting was conducted amid calm, serenity, transparency and without major incidents. This election represents an important step towards the consolidation of the democratic process in Seychelles. We commend all voters who have exercised their civic duty in a calm, peaceful and pacific manner and party agents for their adherence to the code of conduct. EASF-EOM notes with satisfaction the role of the media in the dissemination of updated, factual and credible information to the public at large”.

“EASF-EOM has received information relating to the following points: 1. Envelope for presidential candidate lacking sufficient features to ensure proper and effective seal; 2. Some isolated cases of voters’ intimidation; 3. Non-adherence to the public health measures, no social distancing at some polling stations and long queues in some polling stations due to limited copies of voters’ roll. We have also interacted with two presidential candidates and they have pointed out some concerns also,” explained the head of the EASF delegation.

“EASF-EOM notes with satisfaction the work being done by the Electoral Commission and we are hopeful that the concerns highlighted above will be promptly addressed by the commission in time for the main voting day, Saturday October 24, 2020.

“The EASF calls on voters to actively engage and carry out their civic obligation and constitutional duty by voting in the general elections. EASF is appealing to the citizens to maintain the peaceful environment, adherence to the rule of law and to promote respect and tolerance throughout the elections,” urged Mr Wassihun.

After the first day, the EASF Mission noted with satisfaction the active role of the local observers from the two observer groups – the Citizens Democracy Watch Seychelles (CDWS) and the Association for Rights Information & Democracy (Arid).

Yesterday was also the official launch of the EASF election observer mission to the Republic of Seychelles and to the presentation of the EASF initial report on the first day of special voting.

This international election observer mission consists of nine observers from Djibouti, Ethiopia, Kenya, Somalia, Sudan and Uganda. The observers are from the civil society sector, media, peace and security.

“Observing elections in the Eastern African region has emerged as a critical practice for improving the quality of elections and reinforcing democracy in our region. As part of its mandate, the EASF has deployed an election observer mission to the Seychelles. The mandate to observe elections is broadly derived from EASF strategic plan 2015-2020 pillar one, which focuses on Political, Diplomacy and Advocacy,” noted Mr Wassihun.

The EASF will issue a preliminary statement based on the objective assessment of the process on Sunday October 25, 2020.