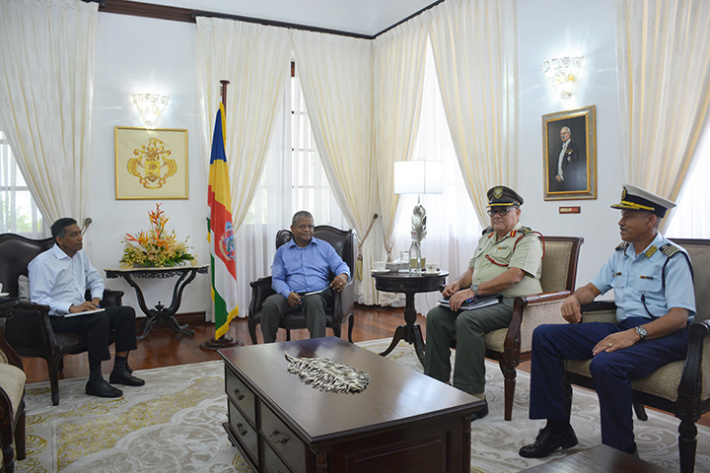 The meeting with the heads of the defence forces (Photo source: State House)

The discussions form part of efforts to work together and ensure a peaceful, calm transition process in the best interest of the country.

This follows the inaugural ceremony held on Sunday where President Ramkalawan, succeeding former President Faure, was formally sworn into office as the fifth President of the Republic of Seychelles.

Aside from being the head of state, the President is also the commander in chief of the Seychelles People’s Defense Forces (SPDF) therefore the first meeting held yesterday morning was with the SPDF chief of defence forces (CDF) Colonel Clifford Roseline and the SPDF chief of staff, Colonel Michael Rosette.

He also met with the commissioner of police Kishnan Labonte followed by a meeting with the director general of the Seychelles Intelligence Service, Benediste Hoareau.

Aside from meeting with officials engaged in the law enforcement domain, President Ramkalawan, under the guidance of former President Faure, also held discussions with the principal secretary for administration in the Office of the President, Yvonia Richardson.